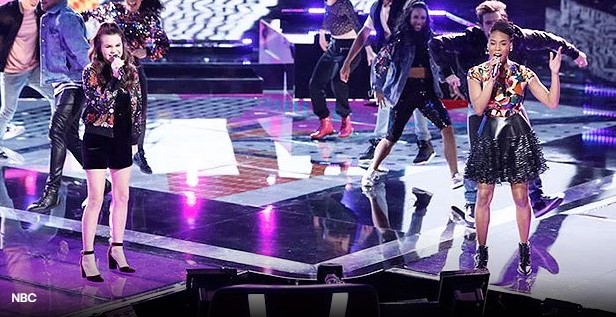 It was elimination night on The Voice! But, this one was quite special and nerve-racking, as four artists went home, and four advanced onto next week’s finale! This marked the biggest elimination of the entire season. So, take a look at our recap!

First, Host Carson Daly recapped a few highlights from last night’s Semifinals performances and reminisced with the judges. Carson then announced the most streamed artist of this week — Chris Kroeze (Team Blake). But, would it be enough to pull him through to the finale?

Carson introduced the first artist who will move onto the finale. And, it was Team Blake’s Kirk Jay, the country/pop singer from Alabama. This almost seemed like a no brainer because his performance in the Semifinals was one of his best yet.

Then four-time Grammy award winner, Michael Buble took the stage for an outstanding performance of “When or Where”.

Carson then announced the second finalist. The next artist safe and moving on in the competition would be none other than Chevel Shepard of Team Kelly.

Hailee Steinfeld took the stage for an electric performance of “Back to Life” from the upcoming movie, Bumblebee, which she stars in. She looked stunning in a black, sparkling, skin tight jumpsuit.

The next finalist announced was Chris Kroeze — last night’s most streamed artist — of Team Blake.

Carson then announced the bottom three artists who had to perform on the spot to fight for a spot in the finals. The first artist he called was MaKenzie Thomas of Team Jennifer. The second, Reagan Strange of Team Adam. The final artist was Kennedy Holmes of Team Jennifer. The artists then went back stage to prepare for their crucial performances.

MaKenzie Thomas took the stage first to perform, “Up To The Mountains” by Kelly Clarkson. Per usual, MaKenzie delivered. She hit every note and almost sounded like Kelly!

Next, Reagan Strange performed “Wherever You Will Go” by The Calling. But, the 14-year-old, who is usually consistently good, week after week, was way off when she needed to be on her A-game. Adam’s critique of her after even seemed like he was quite nervous. Remember, Reagan is Adam’s only remaining artist in the competition. So, if she doesn’t survive the elimination, he’s officially out of the running to win season 15 of The Voice.

The last performance was by Kennedy Holmes, who sang a beautiful rendition of “How Do I Live For Her”. She was exceptional, per usual. It’s so easy to watch Kennedy… You can tell she’s very comfortable and confident on stage and within her voice.