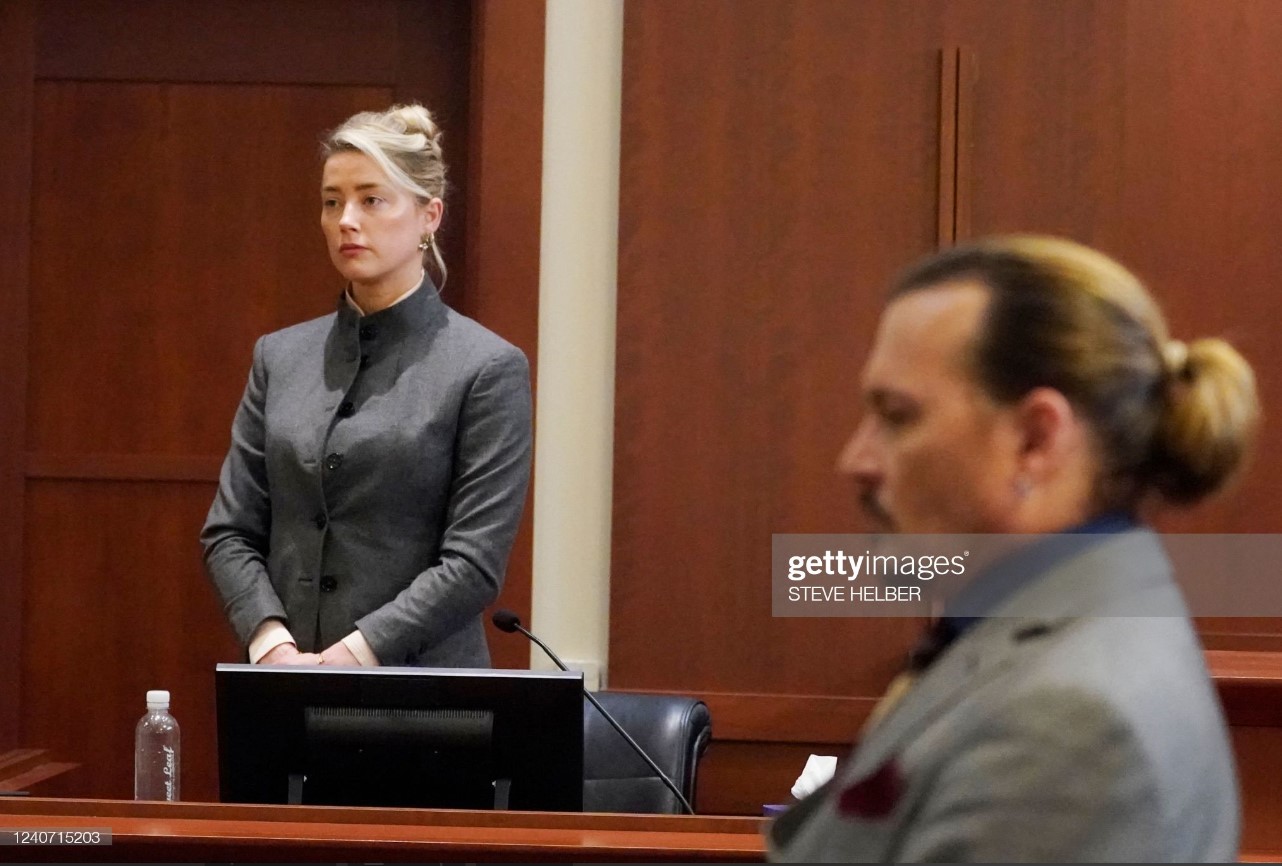 Celebrities’ Reactions To The Depp Vs. Heard Trial

As the legal battle waged on, the Johnny Depp vs. Amber Heard defamation trial only continued to gain attention. With the proceedings being live-streamed from Virginia, everyone with internet access could easily follow the case, so unsurprisingly, the public has been tuning in to get minute by minute updates about the trial, even while court was in session — and so have celebrities. With serious allegations (including domestic violence, sexual violence, and drug use) being brought up in the courtroom, it’s no surprise that stars are eager to speak out about the legal proceedings, as well as give opinions on the former couple.

While some celebs, like Drew Barrymore, Lance Bass, and the cast of SNL, have all faced backlash for their responses to the lawsuit, other stars have chimed in to offer their support to the party that they believe is telling the truth. For example, after the audio of Heard admitting to hitting Depp was played in court, Julia Fox sided with “The Danish Girl” actress, alleging that Heard’s behavior wasn’t abusive. On the other hand, Ireland Baldwin publicly expressed her support for the “Alice and Wonderland” actor. With plenty of celebrities offering their takes on both the defamation case and the actors involved in it, there are plenty of varying opinions involved in this high-profile trial.

As noted by Entertainment Weekly, on the 16th day of the Johnny Depp vs. Amber Heard defamation trial, former N’SYNC member Lance Bass shared a since-deleted video on TikTok depicting an exaggerated re-enactment of Heard’s testimony. Using a voice-over of the actor’s allegations, Bass stumbled around. First, he sat on a couch before tumbling down onto a rug as Heard’s voice stated, “I was just sitting there on this carpet, looking at the dirty carpet, wondering how I wound up on this carpet and why I never noticed that the carpet was so filthy before.” Then, while on the ground, a hand threw what appeared to be leaves at the singer. In his caption, Bass wrote, “I’ve heard of dirty pop, but dirty carpet … that’s a new one.”

The reactions were mixed, with Entertainment Weekly saying that some individuals on social media took offense to Bass’ video due to the serious claims connected to the testimony. For example, one individual on Twitter stated, “This trial is about domestic violence, emotional abuse, and sexual assault.” However, the outlet noted that other users’ responses were positive. According to Page Six, comedian Jenny Johnson wasn’t bothered by the star’s take on the situation and even responded to the clip and its reaction, saying, “as if I needed another reason to love @lancebass anymore.” Johnson also called the clip an “Oscar performance.” Still, after receiving backlash, People stated that Bass ultimately decided to delete the video.

During an episode of “The Drew Barrymore Show,” the host decided to discuss the Johnny Depp vs. Amber Heard trial with her guest, Anthony Anderson. Referring to the stars’ legal battle as “a seven-layer dip of insanity,” the “Ever After” actress made light of some of the evidence revealed during the trial, and brought up some of Depp’s publicly-released text messages. “How about the burnt body, and why a Honda Civic?” Barrymore questioned while Anderson replied by laughing. The talk show host went on to say that she realized these statements reflected two individuals’ “real lives,” but stated that she didn’t understand why they had exposed so much of their personal information and commented, “This is crazy!”

Due to the defamation trial’s allegations (which include claims of domestic violence and sexual assault), many viewers felt that Barrymore had taken things too far and was insensitive to the situation. As a response to the backlash, E! News stated that the “50 First Dates” star had issued an apology for her remarks in a video on Instagram. “I just want to deeply apologize and appreciate everyone who spoke out because this can be a teachable moment for me and how I move forward and how I conduct myself,” Barrymore said to her fans. The talk-show host additionally declared that in holding herself accountable, she hoped to be a “more thoughtful and better person moving forward.”

With plenty of celebrities eager to offer their takes on the Johnny Depp and Amber Heard defamation trial, it comes as no surprise that Julia Fox wanted to share her opinion as well. In response to a comment on Instagram, Yeezy’s former flame claimed that Heard “never had the power in the relationship” and alleged that hitting wasn’t abusive, writing, “Did she hit him? Yes. Was it abuse? No. You need to have power to be able to abuse it. … He clearly was always way more powerful including physically and financially.” While Marca reported that some agreed with the model’s statement, many others found Fox’s comment to be quite cringey. One Twitter user strongly disagreed with the star’s remark and even stated that Fox needed “a reality check,” while another wrote that the model “represents the voices of idiots.”

Similarly, as noted by the New York Post, singer-songwriter Aubrey O’Day was one of the critics quick to respond to Fox’s controversial statement. On Twitter, O’Day called the “Uncut Gems” actor’s opinion a “trash take,” writing that “plenty of broke, short, skinny, non-famous people have abused their partner,” before adding that she believed “cruel and violent treatment” was abusive no matter who was dishing it out. The artist also said that a person’s status isn’t the deciding factor when it comes to experiencing domestic violence, claiming that plenty of influential individuals are hurt by their significant others due to “jealousy.”

SNL mocked the trial in the show’s cold open

Still, despite its comedic intentions, many people weren’t amused with what they saw on television (at one point in the sketch, Strong’s Judge Azcarate approves evidence declaring that it “does sound fun — and this trial is for fun”). As reported by Buzzfeed, in the aftermath of the parody, SNL faced heavy backlash, with many viewers upset that a case involving domestic violence allegations was treated like a joke. One Twitter user referred to the bit as “grotesque.” Similarly, another called out, “so y’all saw a case involving testimonies about domestic violence, substance abuse, sexual assault, emotional trauma, mental illness, and medical emergencies including people losing actual body parts … and your first thought was ‘this would be a funny sketch for our comedy show!'”

With plenty of opinions on the high-profile case floating around, it’s no surprise that mentions of the Johnny Depp vs. Amber Heard trial has made its way to comedy shows. More recently, Lad Bible reported that Chris Rock had spoken about the pair’s lawsuit during a comedy show in London for the U.K. portion of his “Ego Death” tour. During one part of his show, Rock reflected on having sex, stating that his partner would have to communicate their preference if they wanted it “rough.” The star then touched on the publicized trial, allegedly saying, “Believe all women, believe all women … except Amber Heard.”

The comedian also went in on the claims that Heard had defecated in the couple’s bed. After questioning Heard’s alleged behavior, Rock exclaimed, “she s*** in his bed! She’s fine, but she’s not s***ing fine.” He then repeated Depp’s allegation before adding that anyone who was willing to do that was “guilty of everything.” The actor then shared a few more of his thoughts on the situation and expressed shock that Depp and Heard had continued to have a relationship after the supposed incident occurred, declaring that their sexual relationship must have been phenomenal. The outlet added that the audience seemed to enjoy Rock’s take on the former couple.

As celebrities continue to weigh in on the defamation trial, controversial comedian and podcaster Joe Rogan decided to offer his opinion on Johnny Depp and Amber Heard during a recent episode of his show, “The Joe Rogan Experience.” As reported by the New York Post, Rogan and his guest, comedian Jessica Kirson, discussed the lawsuit, with the host stating, “I’m watching this trial, and, like, it’s a cautionary tale.” As the pair dove into some of the claims in the defamation case, they discussed the defecation allegation, as well as the Milani makeup controversy.

As he continued, Rogan also brought up comedian Doug Stanhope, who Heard sued for writing an article for TheWrap alleging that the “Aquaman” actor was trying to blackmail Depp during their divorce. “He knows her,” Rogan stated in reference to Stanhope before claiming that the comic had said that Heard was “out of her f***ing mind.” The podcaster went on to say that “the only good thing” that would happen if Depp did end up winning the defamation trial would be that people would know what happened. “Everyone knows now, like, there’s something wrong with her,” he expressed. Rogan also touched on Disney’s choice to sever ties with Depp was “a big loss for ‘Pirates of the Caribbean’ … you got rid of the best f***ing pirate you ever had! For a crazy lady!”