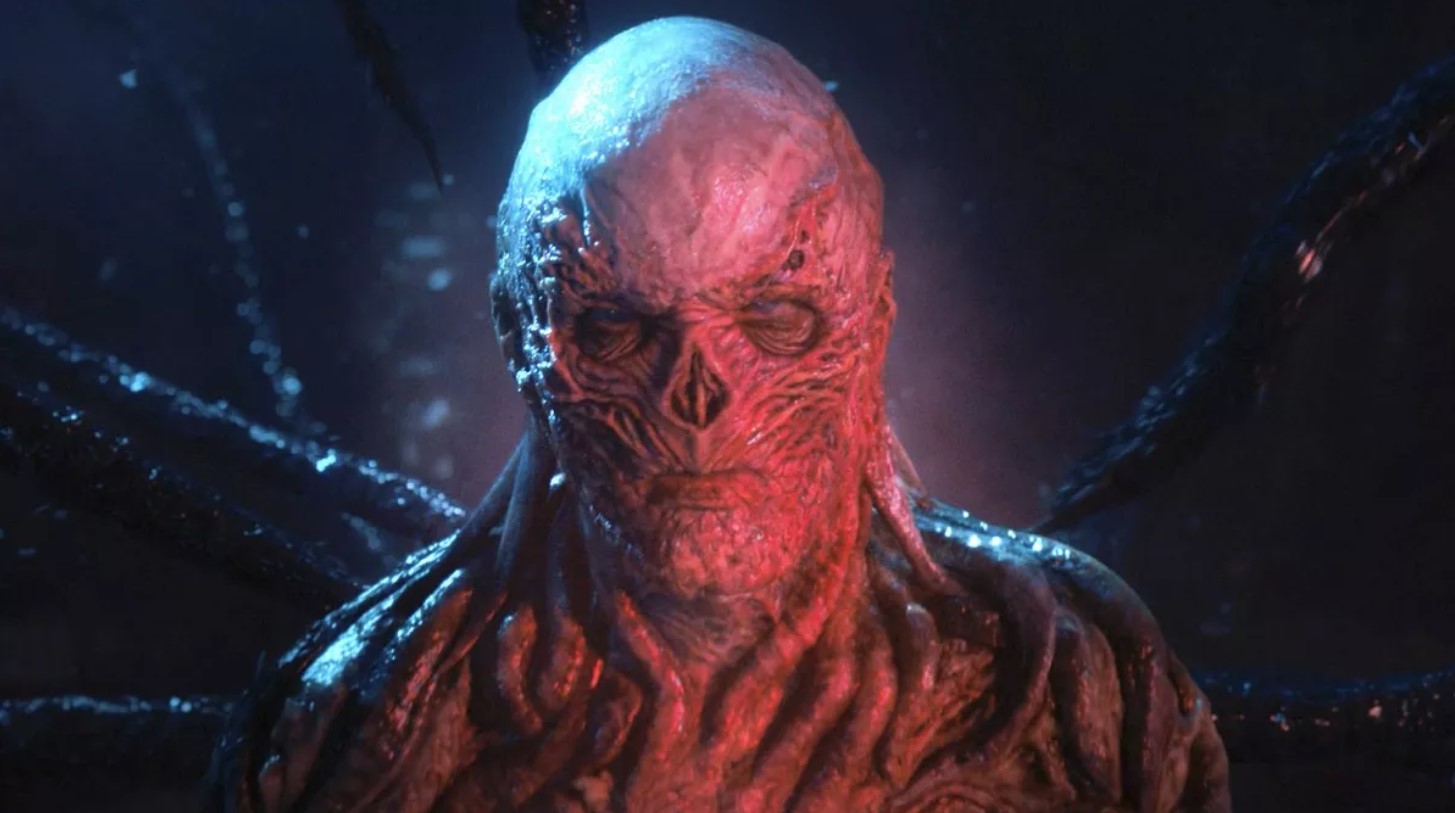 Spoilers ahead for Stranger Things season 4, volume 1. The terrifying fourth season of Stranger Things premiered May 27, introducing fans to the Upside Down’s ultimate villain, Vecna. In the seven episodes of volume 1, the skeletal, gravelly-voiced monster definitely met the advanced hype, with David Harbour describing the villain as “a a psychological horror that I don’t think we’ve really seen,” in a Variety(opens in new tab) interview.

As you’ve probably seen on Twitter, the episode drop ends with a twist that shakes up the entire trajectory of the series so far. The big reveal also gives fans answers to long-running questions, evoking details going all the way back to season 1! Read on for our breakdown of who Vecna is and what he wants with Eleven and the unlucky town of Hawkins, Indiana.

The big bad of Stranger Things season 4 is a humanoid monster with black skin and movable vines that protrude from his entire body. While he lives in the Upside Down, Vecna can psychically reach into the human world, kind of like the Mind Flayer’s connection with Will. He makes his presence known in Hawkins by murdering the town’s teenagers in a truly gruesome fashion, all through mental connections (which is especially terrifying).

Like many other Upside Down monsters, Vecna gets his name (and much of his inspiration) from Dungeons & Dragons. In game lore, the monster is a lich (a.k.a. an undead wizard) who forms an army to help him ascend to godhood, per Digital Spy(opens in new tab). The D&D monster also believes that secrets are the true source of power, and would acquire characters’ secrets to gain power over them, similar to the Stranger Things villain’s manner of feeding off people’s trauma.

While the season 4 marks Vecna’s first murder streak in Hawkins, it turns out the monster first emerged in the ’50s. Super-sleuth Nancy finds out that the monster previously targeted the Creel family, led by patriarch Victor Creel. Shortly after moving to Hawkins, the family was haunted, with dead animals appearing around their house and terrible visions plaguing them. Eventually the mother, son, and daughter all died, leaving Victor to be falsely imprisoned for their murders. Nancy and Robin even visit the man in a mental asylum, where he tells them that the murders were actually done by a “demon,” who also got him too, but he broke its trance (more on that later).

In episode 1, we see the full brunt of Vecna’s powers as they affect cheerleader Chrissy Cunningham(opens in new tab). Chrissy, who suffers from an eating disorder prompted by her emotionally abusive mother, becomes affected by headaches, nausea, nightmares, and eventually waking hallucinations related to her personal trauma. The whole curse about a week, and 24 hours after the visions start, Chrissy enters a drawn-out trance and Vecna gruesomely kills her: she levitates, all her bones break, and her eyes are gouged out.

In addition to a student newspaper reporter whose friend died in a car accident and a jock who seemed to have issues with his father, Vecna also targets Max, who is still grieving and feels guilty after her brother Billy’s death. Luckily, Nancy gets to Creel before Max enters the final trance, and she learns that it was a song that broke his connection with Vecna, in a sort of music therapy. When Max is on the brink of death, Lucas plays her favorite song (in an excellent use of Kate Bush’s “Running Up That Hill”) and she’s able to escape, as the music shows a hole through the vision back into the real world.

Beyond killing people, the deaths also have a grave effect on the barrier between the human dimension and the Upside Down. Every time Vecna kills a person, it opens a new gate to the Upside Down where ever the victim stood. As he keeps going, there will soon be openings to the monster-filled dimension all over Hawkins, and the barrier itself may come in danger of breaking.

While the still-in-Hawkins branch of the Hawkins gang is investigating Vecna’s origins, Eleven teams up with Dr. Owens to undergo a mysterious experiment to regain her powers. Turns out her “Papa,” Dr. Brenner, has hooked up a sensory depravation tank to a computer so he can control what she sees, and makes her relive her training in Hawkins Lab to re-learn how to access her powers (she had suffered something akin to a stroke during the season 3 battle, which made her unlearn them).

During the trips, she befriends an orderly at the lab who secretly supports her while she’s being bullied by older kids (a sort-of mirror to her being bullied in California). He befriended her because he recognized that she’s the most powerful among the kids, and he eventually tricks her into removing a “tracker” from his skin. He immediately goes on the rampage we saw in the season’s very first scene, which Eleven had thought she had caused herself, revealing that he has had powers all along. In fact, he is Number One, Brenner’s very first experimental subject for enhancing telekinetic powers.

At this point, all the floating backstories we’ve learned throughout the season all come together. Number One is actually Henry Creel, Victor Creel’s son and assumed victim of Vecna. Henry had psychic powers as a child—we don’t learn their origin—and could see into the minds of living things. After practicing on animals (hence all the dead ones around the Creel house), he could see into the minds of humans, including his parents, who had traumatic pasts. He developed a hatred for humanity, believing humans are “a unique type of pest, multiplying and poisoning our world, all while enforcing a [cruel, oppressive] structure of their own.” He also found a connection with black widow spiders, who prey on weaker species and keep them from overpopulating.

While Victor thought that the strange things going on in the house were caused by a demon, his wife Virginia knew somehow that it was Henry, and wanted to get him professional help. Henry rebelled, killing her and his sister and attempting to kill his father. After using too much of his power, the boy fell into a coma and woke up under the care of Brenner, whose experiments on Eleven and the kids were actually attempts at recreating him. Eventually, unable to control the child, the scientist implanted a chip to subdue his powers.

One/Henry Creel asks Eleven to join him after explaining his point of view and his goal to restore balance to the world by wiping out humanity. However, El would never go for that, as she has lived as a human and wants to protect the world. So the two most powerful telekinetic humans face off, and Eleven wins. She subdues One and, in a huge twist, sends him to the Upside Down herself, opening the first ever Gate in Hawkins.

While falling into the dark dimension, One/Henry is struck by lightning, disfiguring him. He’s also weakened, and it takes him a while to fully recover. Sometime between being banished ahead of the events of Stranger Things around 1983, and reemerging in Hawkins in January 1986, he also grows extra appendages à la the spiders he respects. The final scene of Volume 1 shows a shot of Vecna, and a close up of the 001 tattoo on his arm, confirming that Henry Creel, a.k.a. Number One, became Vecna.

In his twisted mind, Vecna believes that he his helping the world by wiping out humans, as a “predator, but for good.” When Vecna asks for El to join him, it’s because he also sees her as a predator, “better” than humans. He offers her his path as a sort of freedom, as they reshaped the world in their image. When she refuses and casts him away, she becomes not only his enemy, but his only real threat. That’s why he didn’t begin his mission in Hawkins until she was powerless and gone. And why there’s going to be a truly epic showdown when she gets back.

After that big reveal, it’s impossible for Vecna to not be the main force behind season 4, volume 2. In the two episodes, we’ll get to see whether Eleven has regained her powers in the real-world yet. She’ll also have a rescue team coming her way, as Mike, Will, Jonathan, and Suzy seem to be headed toward the bunker in Nevada where Owens and Brenner are keeping her. We’ll also see the Hawkins gang saving Nancy, who went under Vecna’s Curse in the finale after he preyed on her guilt over Barb’s death (which is especially cruel for all of us!!).

Netflix did include a very brief teaser of the two new episodes at the end of volume 1, in which we hear Vecna saying, “It is over, Eleven. You have freed me. You can’t stop this now.” So we’ll have two feature-length episodes—episode 8, titled “Papa,” is 1 hour, 25 minutes long, and episode 9, “The Piggyback,” clocks in at 2 hours, 30 minutes—to see who will emerge victorious in Eleven and Vecna’s next stand-off.