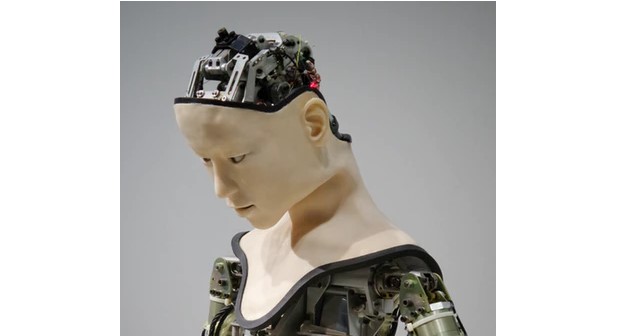 Then there’s Sophia, a robot whose widespread appeal lies not in big, dramatic actions (her torso is often fixed to a rolling base), but rather an unsettling human-like appearance, compounded with the complex ability to express emotions.

“We’re not fully there yet, but Sophia can represent a number of emotional states, and she can also see emotional expressions on a human face as well,” explains David Hanson, the founder of Hanson Robotics.

The firm has developed a number of Sophias at their small research and design laboratory in Hong Kong, where parts and pieces of Sophia 20, 21 and 22 remain strewn across the facility.

According to Hanson, Sophia now has simulations of every major muscle in the human face, allowing her to generate expressions of joy, grief, curiosity, confusion, contemplation, sorrow, frustration, among other feelings.

“In some of the work we’re doing, she will see your expressions and sort of match a little bit and also try to understand in her own way, what it is you might be feeling,” says Hanson.

Besides deep learning and a pre-programmed set of expressions, Sophia’s face is constructed using the latest developments in material technology, meaning it appears softer, more supple and therefore, more realistic. The lab also studies the neurobiology and biology of human facial expressions to help inform how mechanical ones can behave.

“She is a tool for science in studying human to human interaction, and she’s now a platform for allowing AI to express natural-like human emotional state(s), which is something we’re developing. True emotive AI,” says Hanson.

When Hanson first began sculpting Sophia, he wanted her form to resonate with people from around the world. To that end, he looked to old statues of Nefertiti, ancient Chinese paintings, Audrey Hepburn and even his wife as inspiration. But he also wanted to maintain something of a robot sensibility, too.

“It was very important that she represent this intersection of humanity and technology, with the intuitive idea that technology can enhance humanity, help us actualize to higher states of being,” says Hanson.

“At the same time, (technology can) provoke these questions: What does it mean to be human? What is real, what isn’t real? What is the reality of our future which does not yet exist?”

Since her activation in 2016, Sophia has since graced the covers of fashion publications and starred in a recent Moncler campaign. During an event at Shanghai Fashion Weekend, Sophia wore 3-D copper arm cuffs and sculptural garments designed by British artist Sadie Clayton.

“The reason I was interested in working with Sophia is because being an artist, it fuses fashion, art and technology. This was the most natural, organic way of me developing my process,” says Clayton.

“I think she is so stunning in her right. And the expressions that she gives, it’s a really beautiful, warm feeling.”

Besides modeling, she has made appeared on talk shows and spoken at conferences about issues ranging from artificial intelligence to the role of robots. Controversially, she was even granted Saudi Arabian citizenship, becoming the first robot to have a nationality.

“She’s the one robot of the dozens of robots I have designed, that has become really internationally famous,” says Hanson.

“I don’t know what it is about Sophia, that speaks to people, but I hope that we can develop our AI and robots in a way that makes a deep emotional connection.”