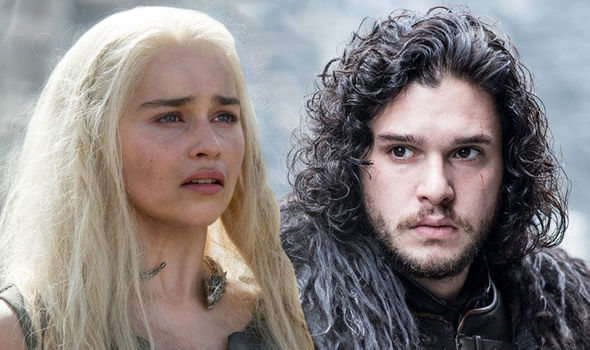 GAME OF THRONES author George RR Martin just gave a massive hint that his new book Fire and Blood predicts why Jon Snow will kill Daenerys. The best-selling author may still be working on Book Six of A Song of Ice and Fire, but he has been busy with various new TV projects and another Gane of Thrones book series. His new book, Fire and Blood, is out next week and details the history of the Targaryens. In a new video, Martin gives a huge hint about the fates of Jon Snow and Daenerys, as well a shocking new information about Aegon the Conqueror and Azor Ahai. Fans are still reeling from the revealtion that Jon Snow is actually Aegon (a different one) Targaryen.

This was shocking enough even before it points out the disturbing fact that he is now in a relationship with his aunt, Daenerys. Mind you, that is still fairly low key for the famously incestuous Targaryens.  The big news, though, is the ever-tightening knots that point to Jon Snow as being Azor Ahai. And if he is the reborn hero of the prophecy of the Prince That Was Promised, he will have to thrust his sword into his wife’s heart. This will transform it into the Lightbringer, with the mystical power defeat the Others.

That wife would be Daenerys and her blood would certainly make sense since she is the Mother of Dragons and closely associated with all things fiery and the very opposite of the ice-bound wights of the Night King. In the video about the first king Aegon, Martin said: “Aegon finally decided to take over Westeros and unify the seven kingdoms that existed at that time under a single rule. There is a lot of speculation that in some sense he saw what was coming 300 years later and wanted to unify the Seven Kingdoms to be better prepared for the threat that he eventually saw coming from the North. The threat we are dealing with in A Song of Ice and Fire.”

Aegon’s actions had previously been viewed simply as conquest but if they were a stand against the forces North of the Wall, this links him closer to the original description of Azor Ahai who united the First Men and the Children of the Forest against the White Walkers. The parallels and blood links between Jon and Aegon are too obvious to be ignored. Did the original Aegon know about the prophecy? Did he even think he might be Azor Ahai? Either way, the pattern has been set for his heir to finally take up the mantle of prohecy.

Jon Snow, now Aegon, is also trying to unite the fractured Seven Kingdoms against the threat from the North. In a sense he is Aegon the Conquerr reborn. Is he also Azor Ahai reborn? Through his Stark family line and Bran he already has links to the remaining Children of the Forest. Melissandre certainly believes Azor Ahai must be Jon/Aegon but Daenerys still doesn’t have any idea what her new husband might be forced to do…