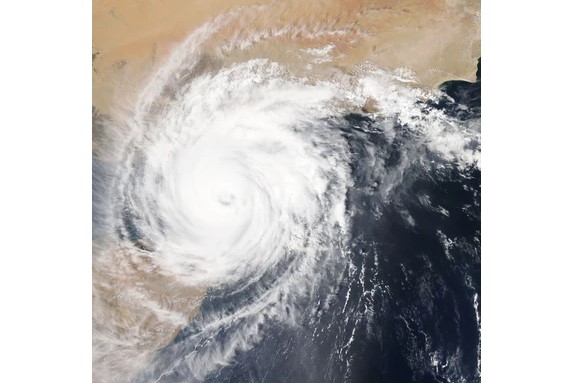 It might be looking like spring in some parts of the U.S. but a big blast of winter is bearing down in the central plains in the form of a “bomb cyclone.” “This is a very epic cyclone,”  Greg Carbin, chief of forecast operations for the National Oceanic and Atmospheric Administration’s Weather Prediction Center told USA Today. “We’re looking at something that will go down in the history books.” He told the publication that it could become the worst storm of its kind in the past 40 years, with category 1 hurricane level winds added to intensifying snowfall and ice. A “bomb cyclone” is defined by an area of low pressure that drops at least 24 millibars in 24 hours or less. CBS Denver reports that a drop of 24 to 30 millibars will occur over the state’s eastern plains.

On March 13  the cyclone began to unleash its fury in Colorado, where some locations saw up to a foot and a half of snow. At Denver International Airport over 1,200 flights were cancelled in the morning and by the afternoon all runways had been shut down due to 80 mph wind gusts and whiteout conditions. Morning rain in Denver quickly turned to snow by afternoon with the potential of 10 inches of powder to fall in the state’s capital, with even more in the mountains and plains to the east.

Heavy blowing snow has already caused highway closures in Colorado and Wyoming, and the Nebraska State Patrol shut down all state highways in the Nebraska Panhandle in addition the closure Interstate 80 from the Wyoming border to North Platte, which is about halfway to Omaha. The National Weather Service warned of “impossible travel conditions” as the storm howls across the great plains, from Texas all the way to Montana and the Dakotas as it moves east.

Colorado residents as well as Denver TV news reports have been documenting conditions as the storm moved through. A Denver man captured video of a huge pine tree falling on top of his wife’s car in a ferocious wind storm. CBS Denver reporter Jamie Leary documented how the wind nearly blew her — as well as her selfie stick — away when she exited her news van. Other Colorado folks showed pics of empty grocery store shelves and in several cases, well stocked refrigerators full of craft beer. The state’s residents definitely know how to batten down the hatches and ride out awful winter weather.

Radar actually shows the storm circulating in a counter-clockwise rotation the way hurricanes do. The powerful winds have left over 200,000 Denver area residents without power while Colorado Gov. Jared Polis has activated the Colorado National Guard for search and rescue operations for stranded drivers in the blizzard. FEMA Region 8 — which covers Colorado, Montana, the Dakotas and Wyoming — advised residents to have a 3-day supply food/water, battery-powered radio, flashlights and portable chargers on hand for the expected power outages associated with the wind gusts up to 75-80 mph in the region.

“This will be one of the strongest wind events in years for West Texas and Southeast New Mexico,” warned the National Weather Service office in Midland, Texas, with gusts up to 75 miles per hour on March 13. The southern plains and lower Mississippi Valley are next to be impacted by “Heavy rains … isolated flooding and severe weather will accompany these thunderstorms as they march fairly quickly eastward,” the weather service said. By Friday the storm will hit Tennessee and parts of Mississippi and northern Louisiana where as much as 4 inches of rain could fall and tornadoes are expected.