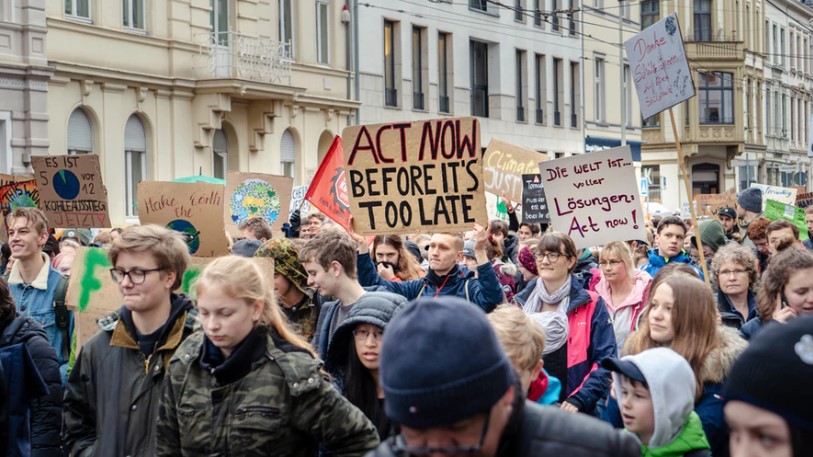 The children worldwide protesting against lax climate change policies are trying to get something across to their elders: they won’t be silent when it comes to protecting themselves and the generations that come after them. That’s why they launched a strike on March 15, walking out of their schools and taking to the streets to make their voices heard. Here’s what’s going on:

Students want politicians to wake up and do something about climate change before it’s too late. You know the saying, “children are our future” — take that to heart. Schoolchildren, some as young as 12, others in high school and college, launched a global strike to prove that they will not sit down and shut up while those decades older than them refuse to combat climate change. One student’s jarring sign at her local protest asked why they’re even in school learning if they’ll just die anyway? How does that not make your heart hurt? The protest’s coordinating organization, Fridays For Future, put it succinctly:

“We, the young, are deeply concerned about our future. Humanity is currently causing the sixth mass extinction of species and the global climate system is at the brink of a catastrophic crisis. Its devastating impacts are already felt by millions of people around the globe. Yet we are far from reaching the goals of the Paris agreement.”

The students outlined their demands in an open letter released on March 1. “Young people make up more than half of the global population,” it reads, in part. “Our generation grew up with the climate crisis and we will have to deal with it for the rest of our lives. Despite that fact, most of us are not included in the local and global decision-making process. We are the voiceless future of humanity… We finally need to treat the climate crisis as a crisis. It is the biggest threat in human history and we will not accept the world’s decision-makers’ inaction that threatens our entire civilization. We will not accept a life in fear and devastation. We have the right to live our dreams and hopes. Climate change is already happening. People did die, are dying and will die because of it, but we can and will stop this madness.” You can read their full letter HERE.

The students are protesting in over 100 countries, in 1,659 towns and cities. When they said they were going worldwide, they meant it. Their intent was to protest on every continent, and they’ve got that nailed. Well, save for Antarctica. The largest protests are currently in the United States, Australia, and western Europe. It helps that kids are experts at social media, because the footage on Twitter and Snapchat from the protests is astounding. Students are currently blocking the gate to Buckingham Palace in London, and marching back and forth across the Capitol lawn in Washington, DC. The pics below show two other protests with a massive turnout. To translate, the first pic shows a sign in German that reads, “Future over profit.” Some of the signs in the second pic are in Spanish, and read “pretending climate change doesn’t exist doesn’t mean it’s not real,” “no more excuses,”

The world should welcome Greta Thunberg for this movement. Greta Thunberg, a 15-year-old from Sweden, has protested at the country’s capital every day since September 2018. Greta’s dedication became an inspiration for students worldwide, and her strike motivated their own. The brave teenager has been nominated for the Nobel Peace Prize for her work.

“[I am] honoured and very grateful for this nomination,” she said on Twitter the day before the strike. “Tomorrow we #schoolstrike for our future. And we will continue to do so for as long as it takes. Change is coming whether they like it or not.

They have the support of progressive politicians who hear their concerns. “It is truly inspiring to see young people, led by brilliant young women, making their voices heard and demanding urgent climate action. They are absolutely correct that our actions today will determine their futures,” said Anne Hidalgo, the mayor of Paris and chair of the C40 group of cities. “My message to young citizens is clear: it is our responsibility as adults and political leaders to learn from you and deliver the future you want.”