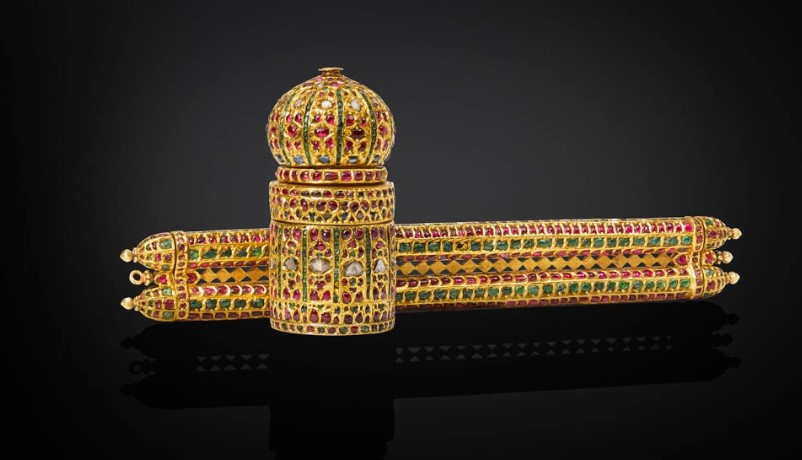 In the 17th century, an exquisite dagger crafted from jade and inlaid with gold was created for Shah Jahan, the emperor who built the Taj Mahal. Two centuries later, it had found its way into the private collection of Samuel Morse, the inventor of Morse code. It’s now just one of 150 breathtaking artifacts borrowed from the private collection of Qatar’s ruling family for the exhibition, “East Meets West: Jewels of the Maharajas from The Al Thani Collection” at San Francisco’s Legion of Honor.

The Al Thani Collection comprises Indian art and jewels from the Mughal Empire through to the present. It was established by Sheikh Hamad bin Abdullah Al Thani, a member of the Qatari royal family. To bring the precious items together, he enlisted the help of Amin Jaffer, the international director of Asian art at Christie’s, who helped collect more than 400 pieces in just two years. The earliest pieces on display date back to 1526, when the Mughals — a Muslim dynasty with roots in Central Asia — invaded northern India and founded an Empire. By that time, Europeans had already established trading posts in India, and the Mughal emperors were fascinated by the technology they used to craft jewelry (in particular, techniques for cutting gemstones), as well as overseas treasures, such as emeralds from Colombia.

In return, Europeans were stunned by the wealth of the Mughals. The treasury of the emperor Jahangir, for example, was said to have included more than five million carats of uncut diamonds. A 16th-century Flemish gem trader, Jacques de Coutre, is said to have observed that Jahangir had more jewels than the monarchs of Europe combined. The Mughals and the Europeans went on to forge close links, according to the exhibition’s co-curator, Martin Chapman.

“Western jewelers and goldsmiths worked at the Mughal courts, while the techniques and tastes of European jewelry houses continued to exercise great appeal among Indian princes,” he said.

“In later years, it was to Europe that the maharajas flocked in order to reset gems in their treasuries, inspiring a fusion of Indian forms and tastes with Western settings that characterizes an apogee of 20th-century jewelry design.”

Gender is also addressed in the exhibition, added Chapman, with almost all of the pieces made for — and worn by — men:

“We in the West seem to think that only women wear jewelry,” he said. “But it is the men in India, specifically the male rulers — Mughal emperors and maharajas — who turn our expectations on their heads with their extravagant and elaborate jewelry: bangles, bracelets, rings, necklaces and earrings, as well as the most characteristic jewel, the turban ornament.”