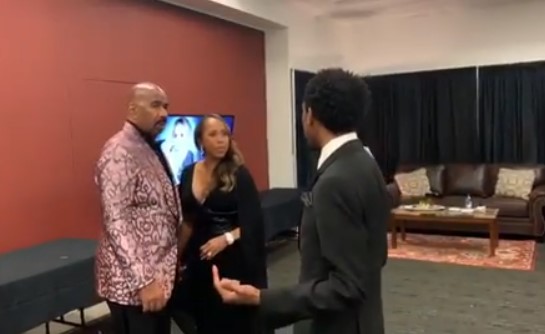 After 11 years of marriage, Marjorie, 54, and Steve Harvey, 62, are doing just fine. “We’re good — always,” she told HollywoodLife, EXCLUSIVELY, during the 11th Annual Ladylike Foundation Women of Excellence Luncheon, where she was honored in LA. As the couple has been the subject of recent divorce reports, Marjorie admits that she and Steve don’t pay any mind to the outside chatter. “We’re prayed up,” she said. “Prayer works. We’re covered.”

Although Steve and Marjorie choose rise above any and all gossip, she has her own way of dealing with the attention. “Oh, see, first off, understand this: When you’re not doing anything, the devil don’t have anything to do with you. But, when he does, when God is doing some amazing things in your life, that’s when people get busy,” she explained. “That’s when the devil has all his little things, doing what they do. But, we’re above that. We’re covered.”

Marjorie seemed to address the divorce rumors in a comical video on Instagram, May 4. The clip begins with Steve’s 28-year-old son, Broderick Harvey, Jr., telling the couple he heard that they’re splitting. Marjorie and Steve then look at one another and start laughing off the claims. The video ends with the two engaging in a playful back and forth about the rumors, questioning their relationship. If you want a good laugh, click the link below:

The outlandish rumors came at the same time news broke that the Steve Harvey Show will come to an end in June. But, if you ask Marjorie, it’s a “good thing.”

“If you want to know the truth, it’s a good thing if you ask me!”, she says, explaining, “It’s a sign of completion. God has such amazing things in store for us and it’s been a lot of things on the vision board that we haven’t had time to do. It’s next level.”

As for what the couple will do now that they’ll have a lot more time on their hands — Marjorie admits that not much will change once the show is over. “I’ve learned this with my husband, free time is never really that free!”, she says. “It’s always some other things that are already up the pipe. Now, we just have time to do those.”