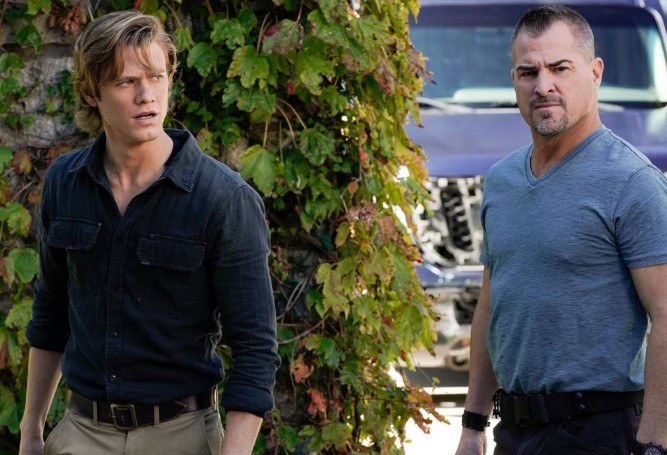 George Eads, out? According to reports, Eads will exit the hit CBS remake of MacGyver sometime in 2019.

According to The Hollywood Reporter, Eads stormed off the set of the series, now in season three, following an altercation back in October, but is back at work. Eads reportedly expressed desire to exit the show and spend more time with his Los Angeles-based family. His last episode is slated to air in 2019.

MacGyver, which is based on the 1985 series of the same name, debuted in 2016. Its second season averaged roughly 8.6 million viewers. With DVR playback factored in, the show has been hovering around 7.5 million total viewers in season three and a 1.1 rating in the 18-49 demographic.

Eads’ exit is only just the latest shakeup to come to a hit show. Over the last several months, Shameless has been faced with two exits of long-running actors, ditto for The Walking Dead, and Damon Wayans announced plans to exit Lethal Weapon.

Take a look at the most recent shocking TV exits below.

George Eads will exit the CBS remake in 2019. He expressed his desire to exit and spend more time with his family.

Lauren Cohan said goodbye, for now, to The Walking Dead following prolonged contract negotiations. Cohan appeared in a handful of season nine episodes, but after a six-year time jump her character Maggie Greene is nowhere to be seen. Producers are hopeful she’ll return in some capacity for season 10. Cohan is set to star opposite Whiskey Cavalier on ABC.

Fox’s Lethal Weapon is no stranger to cast exit drama. Clayne Crawford was fired from the series after the second season and his former TV partner Damon Wayans announced his plans to exit the hit drama after the 13-episode third season. “I’m going to be quitting the show in December after we finish the initial 13, so I really don’t know what they’re planning, but that’s what I’m planning,” he said. “I’m a 58-year-old diabetic and I’m working 16-hour days… Murtaugh said, ‘too old for this.'”

Ian Gallagher went to the slammer. Cameron Monaghan left Shameless during its ninth season, his character was locked up. In reality Monaghan was ready to explore new projects after nine years on the show.

Chelsea Peretti will appear in Brooklyn Nine-Nine when it makes its NBC debut, but she won’t stick around for the whole run. In a series of tweets, the actress announced her plans to leave the comedy, but maintained she would be back. She even used Emmy Rossum’s farewell letter to Shameless as the basis of her own. Peretti welcomed a son with husband Jordan Peele in 2017. Her character was on maternity leave and sat out several episodes in season five.

“Emmy Rossum will forever be part of the Shameless family. She has been integral to the show’s success, from her wonderful portrayal of Fiona to her leadership role on set, as well as directing multiple episodes of the series. We are hard at work now creating a season nine finale for Shameless which we hope will provide a Gallagher-worthy sendoff for Fiona that honors the great work Emmy has done. It is always bittersweet when an ensemble member decides to move out of the proverbial house, but our door will always remain open for Fiona to return home for a visit, or to move back in. I look forward to continuing the stories of this wildly unpredictable family and all of us on Shameless will miss Emmy and her wonderful Fiona,” Shameless executive producer John Wells said in a statement.

Andrew Lincoln said goodbye to the blood, sweat and dirt of the zombie apocalypse and leaving The Walking Dead sometime in season nine. “These guys have been the best surrogate family I could have hoped for. But I do have a real family and it is time for me to go home,” Lincoln said at San Diego Comic-Con.

After 15 years, Pauley Perrette hung up her lab coat and left NCIS. “I believe in God and the universe so firmly, and it just suddenly became blindingly apparent that now was the time,” she said. “After a lot of thought, I decided to announce it myself on Twitter because I didn’t want it to be turned into anything ‘shocking. Abby leaving is more than a cheap TV ploy.”

Speedy’s headed off on her own! Original cast member Willa Holland’s exit from The CW’s Arrow has been in the works for a while, boss Marc Guggenheim told TVLine. She asked to have her episode count reduced and then to be written out in season six. Her exit just happened to coincide with the return of Thea’s boyfriend, Roy (Colton Haynes), and so they headed off into the sunset together to destroy the dangerous Lazarus Pits that her late father had discovered.

While Oliver (Stephen Amell) has now lost yet another member of his family, at least now he’s got a wife and a kid to keep him company!

And many others we will complete the list in other article.