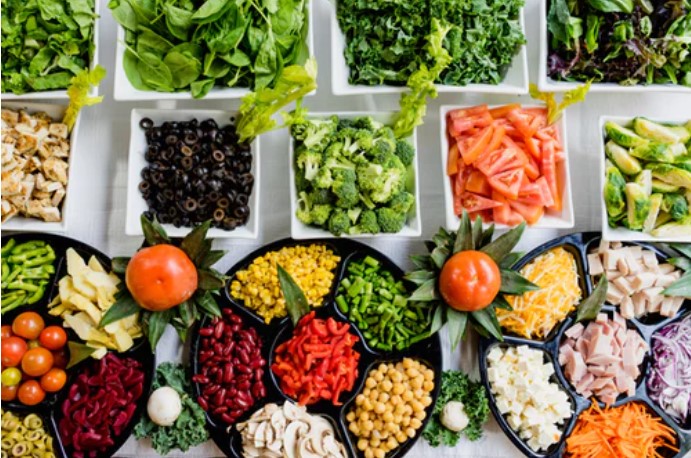 “It’s really worth having a quick check of portion sizes before you’re filling up with food because we know that it does take a little bit of time to get those fullness signals coming through,” said Bridget Benelam, nutrition communications manager at the BNF. “Probably all of us have had the experience where you eat something and then you eat a bit more and perhaps a bit more and then 10 minutes later you feel much too full and you wish you had eaten a little less.”

Adjusting your portion sizes could be one way to avoid that feeling.

The guidelines, which are based on having 2,000 calories per day, which is the amount suggested for an average, healthy weight, adult woman, use measurements such as handfuls and cupped hands to makes them easier to follow.

“It provides some practical guidance about portion sizes,” Benelam said. “People don’t necessarily have to weigh out their foods, because we know a lot of people don’t want to do that.

“We’re looking at how often you eat foods and food groups, so that you get the right balance throughout the diet.”

The Find Your Balance guide suggests the following portion sizes per day:

The guidelines were calculated the British Nutrition Foundation by looking at guidelines in other countries, such as the US and Canada, using consumption surveys and through seeing what was available in retail, so that the portion sizes could be accurate and realistic, said Benelam.

Although the guidance was designed using food groups established in the UK, Benelam believes that as long as the foods covered in those groups are relevant, they could be applied to other countries as well.

“It’s just being aware of the variations in what people get for their national guidance and whether our guidance fits in with that,” she said.

Benelam also pointed out that portion control is not always about eating less.

“It’s also about eating differently,” she said. “Things like fruit and vegetables, you don’t have to hold back on your portion sizes generally, so long as you’re not adding lots of oil or fat or sugar to them, you can have big portions that are relatively few calories.”

She also said that people should be eating more of some things, such as whole grains, fish and legumes.

“Portion control is very important, especially if you are trying to lose weight or maintain your weight over time,” Lisa Drayer, CNN health and nutrition contributor, said in an email. “Even healthy foods — like whole grains, nuts, and healthy oils, can increase your calorie load if you don’t pay attention to portion sizes.”

Although these guidelines are based on a specific daily calorie intake, Drayer also said that it is important to understand that the number of calories a person needs daily depends on a number of things.

“The actual number of portions for each food group that you should consume each day will depend upon your individual calorie needs — which is dependent on your personal weight goals as well as factors including your height, weight, age, gender, and activity level,” she said.

Like Benelam, Drayer pointed out that some foods are more important than others when it comes to portion control. When it comes to weight loss, she agrees that fruit and vegetables are “healthy additions to any diet.”

However, she also said that some food groups, such as oils, can be easily overdone.

“When it comes to portion control,” Drayer said, “some foods matter a lot more than others.”