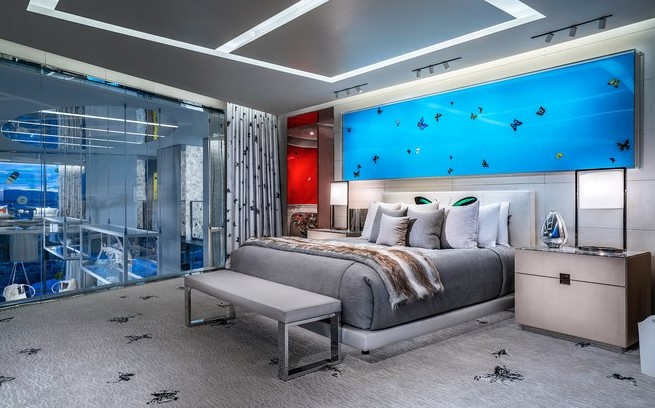 When you pull into the front driveway of Palms Casino Resort in Las Vegas, you’re greeted with balloon-like letters that spell out the hotel’s name and a 3-D neon orange wireframe of a Lamborghini Countach. For those who aren’t in the know, these aren’t just there for Instagram-worthy moments. They’re the works of Adam Parker Smith and Benedict Radcliffe, respectively. And once you pass through the gilded doors, you’re met with a 13-foot-long tiger shark that has been trisected into three tanks of formaldehyde, lofted above bottles of top-shelf spirits. The attention-grabbing set-up is artist Damien Hirst’s first bar project in the United States, featuring the fierce sculpture titled The Unknown (Explored, Explained, Exploded). And it’s these three pieces that immediately set the tone for the revived Palms—it’s dramatic, and it’s cool.

Cool hasn’t ever really been used to describe the Palms. But a nearly complete $690 million renovation has filled it with a staggering amount of impressive artwork, including works by juggernauts like Takashi Murakami, KAWS, Andy Warhol, Jean-Michel Basquiat, and, of course, Hirst. It’s an eclectic mix of blue-chip and street art that rarely mingles under one roof, demonstrating the acumen of the hotel’s creative director, Tal Cooperman, and his ability to reflect the current zeitgeist.

The property has also been making major strides in the music department, a big draw in Sin City, and just announced that they’ll be holding a three-night festival for the anticipated opening of the KAOS nightclub, featuring the likes of Cardi B, Skrillex, and Travis Scott, with additional performances by Alicia Keys and Hozier at their Pearl Theater. And they’re not done with the surprises. Today, the hotel has unveiled Hirst’s first foray into hotel accommodations. Titled the Empathy Suite, because Hirst wants you “to feel empathy when you’re in it; empathy with all your friends wherever they are and whether you’re with them or not and to feel empathy when you’re spending the night with them in the suite and empathy with the whole world the morning after,” the artist has collaborated with Bentel & Bentel Architects to design the world’s most expensive hotel room. Commanding a price tag of $200,000 for two nights (it does come with a conciliatory $10,000 resort credit, however), the 9,000-square-foot, two-story villa is decked out in Hirst’s work, six of which are original pieces. The first and only of its kind to house such an extensive collection of contemporary art of this magnitude, the over-the-top digs provide guests the opportunity to sleep in a private museum.

Upon entering you’ll find a tank with two bull sharks (Winner/Loser) built into the foyer’s wall, followed by a 13-seat curved bar filled with a jumble of medical gloves, needles, and the like, juxtaposed against the meticulously arranged shelves seen throughout the villa. Above it hangs two vitrines, one containing a marlin skeleton and the other with a taxidermied version of the spear-snouted fish—a work humorously titled Here for a Good Time, Not a Long Time. The remaining four commissioned pieces are also named in a fashion that alludes to Sin City. There’s Casino Royale, a collection of ten panels that features the artist’s butterfly motifs on monochrome glass-painted canvases; a medicine cabinet unambiguously dubbed Vegas; a large case filled with cubic zirconia diamonds called The Winner Takes All; and Money, a cabinet next to the dining table with lines of pills in varying shapes.

In addition to these large-scale works, Hirst’s touch is seen everywhere throughout the two-bedroom suite. Out on the balcony you’ll find his famous spots decorating the columns that flank the cantilevered pool overlooking the Las Vegas Strip. The water basin itself is inlaid with butterfly mosaics, while the surrounding glass walls and floors feature pill decals. Inside, the two motifs carry over onto the white furniture, carpet, illuminated columns, staircase, and wallpaper. The pool table, set behind one of the two spacious lounges, has also been spruced up with the artist’s signature spin design. Even the Himalayan salt room has butterflies and skulls etched into the walls. (There are also two massage alcoves for in-room treatments.) It’s all unapologetically excessive, and right at home in Sin City.