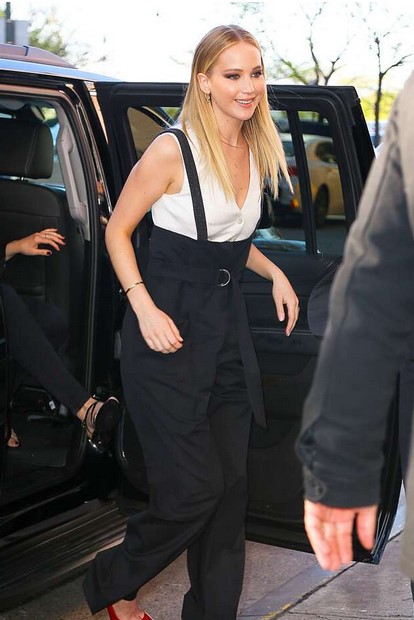 “I think that people think that we already are friends because I am famous and they feel like they already know me—but I don’t know them. I have to protect my bubble, like, ‘I have a weird job—don’t let this be a reality.'”

So Jennifer Lawrence told Australia’s Daily Telegraph in 2016, a decade into what had been a remarkable career so far, punctuated by the time she was 22 with two huge movie franchises and an Oscar win.

The now 29-year-old actress has also acknowledged that her lamenting about fishbowl culture doesn’t exactly warrant the world breaking out the violins for her, nor does she think it should. But since her Oscar nomination for 2010’s Winter’s Bone, the bona fide movie star has remained remarkably on message about how uncomfortable it’s been to have strangers assuming they’re entitled to a piece of her life just because they liked her in a movie.

And she loves acting more than anything, and she’s awfully good at it, so her situation has proved quite the double-edged sword all these years.

She wasn’t sure at the time what, exactly, she was going to do to achieve that fame—but two mega-hit franchises, two consecutive years as the world’s highest-paid actress, countless magazine covers, a Dior contract, four Oscar nominations and one win later, Lawrence has reached a level of recognition that little girl from Louisville couldn’t have begun to imagine.

When she first started getting an uncomfortable level of attention, when the paparazzi first followed her to Whole Foods and she needed security to help her get back to her car, she realized life as she’d known it pre-Hunger Games was over. She compared getting cast as Katniss Everdeen to getting a “ticket to another planet and I’m moving there and there’s no turning back, and I don’t know if I’m going to like that other planet or have friends there.”

But the sudden and ultimately faux familiarity that everyone had with her remained the rub.

“I am just not OK with it,” she told Vogue. “It’s as simple as that. I am just a normal girl and a human being, and I haven’t been in this long enough to feel like this is my new normal. I’m not going to find peace with it.”

So why in the world would she ever compound that interest by joining forces permanently with another major celebrity?

The Brangelina life isn’t for everybody. It wasn’t even for Brangelina in the long run.

Work can be an opportune place to meet a potential partner, and Lawrence has had committed relationships with a co-star, an Oscar-nominated filmmaker and a Grammy-winning rock star, declared her crush-love for Larry David, and been linked to countless other actors she appeared in movies with, all rumors of convenience that turned out to be wrong.

She used to scoff, however, when people told her she should date someone “on her level.”

“Like, what is that level?” she cracked to Vogue. “That doesn’t mean anything to me, as a person.”

Sure enough, now she’s engaged to a regular guy—albeit a very photogenic and successful regular guy who has well-known clients, but a normie just the same.

Lawrence knows how spectacularly special her fiancé, Cooke Maroney, is…

And that’s the only person who needs to know.

“Well, he’s just the best person I’ve ever met in my whole life,” she told Entertainment Tonight at the X-Men: Dark Phoenix premiere in June. “[Saying yes] was a very, very easy decision.”

While Lawrence has some very high-profile pals, including Amy Schumer, Adele and Emma Stone, she maintains close ties to her hometown and family, and she keeps friends around her who’ve known her since before her career took off.

“I want my life is as normal as possible,” she explained to the French magazine Madame Figaro in 2013. “One of the dangers in the film industry is that things are too fast…I want to keep it simple.”

“I do not have an assistant,” Lawrence added. “One [person] that helps me is my best friend. At the end of a day of shooting, I can go home and hang out with her, do what we do…and not share time with someone who works for me.” That best friend/assistant was her longtime pal Justine, while another, Laura Simpson, was Jen’s date to the Oscars in 2014, the year Lawrence returned as a presenter after winning Best Actress in 2013 for Silver Linings Playbook.

Simpson got to meet Brad Pitt backstage, so she was a winner too, but according to Page Six, it was Simpson who introduced Lawrence to Maroney, so she more than returned the favor.

The beginning of their courtship last summer coincided with the start of a much-needed break Lawrence had planned to take after running herself ragged shooting and promoting multiple X-Men movies, Passengers, mother! and Red Sparrow, most of which won’t be considered major highlights when the book of J.Law is written.

In turn, she and Maroney have been able to enjoy an abnormally uninterrupted run of normal-esque life in New York, where he is director of the contemporary art gallery Gladstone 64 (and you can email almost any staffer directly from their web page, except for him, we wonder why…).

While she showed up to support Dark Phoenix after the much-delayed installment in the saga finally hit theaters, Lawrence—who had a relatively small role in this one—wasn’t part of the massive press tour, boarding double-decker buses with James Corden or sitting down with Jimmy Kimmel.

So, she hasn’t been engaging with reporters for lengthy magazine profiles or sharing charming anecdotes on TV for awhile, and not only has that allowed her to keep this halcyon time of her life mainly to herself, this time around she knows her S.O. isn’t going to be expected to be doing the same thing on his end any time soon.

Not that people aren’t singularly interested in what Lawrence is up to—especially when she and Maroney happened to be spotted outside the New York City Marriage Bureau in Manhatan this week, prompting intense speculation that they went ahead and tied the knot with zero fanfare, or at least obtained a marriage license.

That sort of no-frills ceremony may suit Lawrence, who told ABC News’ Diane Sawyer in 2015 that she definitely wanted to be a mother one day, but didn’t know if she’d ever get married.

“And I’m OK with that,” she added. “I don’t feel like I need anything to complete me. I love meeting people. People coming into your life and bringing something. I didn’t know Amy [Schumer] six months ago, and she brings something into my life that’s so special. I don’t really plan on getting married. I might.”

Of course, that was a long time before she met Maroney, who proposed after less than a year together. They had an intimate engagement party in May and any sort of wedding plans have been kept tightly under wraps.

“I definitely wasn’t at a place where I was like ‘I’m ready to get married.’ I just met Cooke, and I wanted to marry him,” she explained her change of heart regarding that whole marriage thing on the NAKED With Catt Sadler podcast in June. “We wanted to marry each other. We wanted to commit fully. And, you know, he’s my best friend. I feel very honored to become a Maroney.”

The couple have had some fancy date nights and Maroney accompanied Lawrence last fall to the premiere of a movie she wasn’t in, the darkly humorous period drama The Favourite (starring good friend Emma Stone), but they have yet to officially work a red carpet together—and that has worked out swimmingly for the couple so far.

Lawrence knows full well that the press tours and the red carpets and the interviews, et al., are part of her job. But just like anybody else who does a job, she would prefer not to be bothered when she’s trying to live her life. The battles can feel fruitless at times, but she’s still determined to win the war.

“I still felt entitled to a certain life that I just wasn’t allowed to have [anymore],” she told Glamour in 2016, two years after she was hacked and intimate photos of her ended up online, the ultimate violation that further shaded her view of just how little of her life random people deserve to know about. “I felt like I had the right to say, ‘I don’t want to be photographed right now, I don’t want people outside my house right now.'”

“I think that we should be allowed time off,” she added. “Three months. ‘Oh, it’s my three months off. You can’t photograph me.’ I would love to be able to control being photographed.”

It makes perfect sense that she has paired off with someone who doesn’t come with his own paparazzi detail and, better yet, has no interest in acquiring one.