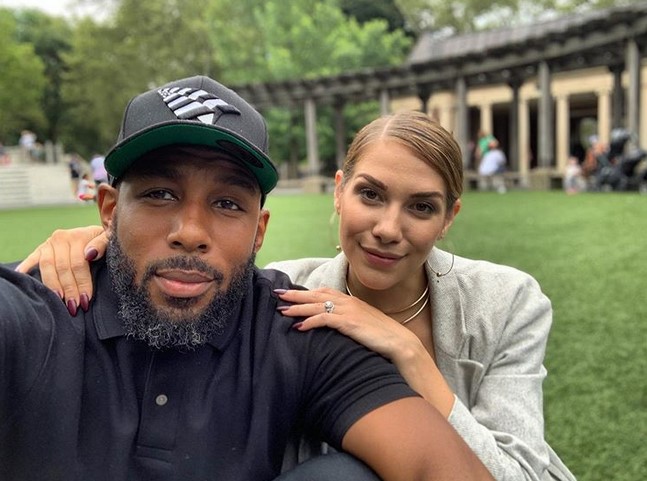 We Think We Can Swoon: Inside Stephen “tWitch” Boss and Allison Holker’s Incredible Love Story

Personally, we don’t know how anyone makes it through a season of So You Think You Can Dance without falling in love. Allison Holker and Stephen “tWitch” Boss did, however. But only because they hadn’t met each other yet. (Actually, they had, but she didn’t remember. More on that later.) Holker, a contemporary dancer from Minnesota, competed on the Fox series’ second season, in 2006, and finished in the top eight (which now seems odd, considering what a wildly popular all-star she became down the road).

Boss, known professionally as “tWitch,” a hip-hop specialist from Alabama, was the runner-up on season four in 2008, the same year Holker welcomed a daughter with her then-fiancé. They were ships in the night, fulfilling their respective dancing dreams, separ SYTYCD, with its intense music, the long gazes into each other’s eyes, and all the leaping and tumbling and emotion, started bringing back former contestants as all-stars to dance with the top 10.

Holker and Boss were both invited back as all-stars in 2010, season 7 (which, incidentally, had a top 11). And that was that. Well, almost.

“I didn’t just make one move—I made, like, 10 moves and he wasn’t seeing them, so I had to put myself out there even more,” Holker, who started crushing on Boss from day one that summer, told Dance Spirit in 2012. “From the first week of SYTYCD as All-Stars, I thought he was the cutest guy ever. His personality was so fun.”

Boss, meanwhile, said he actually met Holker years prior at a party thrown by season two contestant Ivan Koumaev, but she didn’t remember him. Regardless, he had always been a fan, and was even brought to tears by her dancing a few times.

“We met again during Season 7, but didn’t say a word to each other the whole season,” he continued. “So that’s why I had no idea, because she wouldn’t talk to me and I thought she wasn’t interested. She did catch me checking her out in the hallway once.”

So, his interest had seemingly been established, but when she’d make a point of paying him extra attention during rehearsals, “he wasn’t feeling me at all,” she recalled.

“Outside of rehearsals, we avoided each other,” she added. “Both of us are very social and were friends with all the other All-Stars. The whole season, he was legitimately the only person I didn’t speak to.”

Boss, meanwhile, had shot the movie Step Up 3D, and the SYTYCD cast went to the premiere. Holker, frankly, thought he looked awfully hot in his suit, but was too shy to say much at the premiere. At the after-party though, they danced together a bit and Boss got her number.

“So then I got his number and texted that I was proud of him and that he looked great that night,” Holker told Dance Spirit. Boss, who admitted to being “terrible” at reading the signals, said that he still would have never guessed that she was acting as if she was into him. Finally—finally—the sparks were undeniable at the season seven wrap party.

“I knew it was the last night I would see him,” Holker said. “I was like, ‘Geez, I guess I have to be stronger about my moves.’ I hadn’t planned on going because I’m a mom and don’t really go out and party. But when he texted to see if I was going, I was ready and in the car!”

When she arrived, their eyes met and he motioned for her to come over. She did—”I cut through people, didn’t even stare at anyone, didn’t see anyone else at the party,” she later recalled to Access Hollywood—and they danced for three hours.

And we could facetiously say they’ve been dancing ever since, but they have really been dancing ever since.  They show off their moves at work holiday parties (in addition to appearing on later SYTYCD seasons, Holker was a pro dancer on Dancing With the Stars for several seasons and Boss has been the resident DJ at The Ellen DeGeneres Show since 2014) and they do routines at home, sharing the syncopated love on Instagram.

In recent months they marked Holker’s 24th week of pregnancy with a dance, then her 29th, and then her 33rd, and her 34th a week later on National Dance Day—point being, they dance together all the time! They don’t need a reason. It’s what they do.

“It’s nice to have common ground to connect on, but it’s also nice to have the dichotomy of two different genres,” Boss noted to Dance Spirit in 2012.” We’re very close-knit, but we still have our own things.” Holker said it was refreshing to finally be with someone who understood a professional dancer’s schedule—the long hours, the travel, the attention from the opposite sex. Jealousy could be a thing, sometimes, but their solution was always to just talk it out. Or…

“The first year, we had a Skype relationship,” Holker acknowledged. “It proved how much we were committed to each other because we’d be on different schedules and we still planned out what hour we’d speak every night. After Season 7, I went on tour with SYTYCD for three months, and directly after that, he went on tour with The LXD. Then I moved to Toronto to do Cobu 3D, and he went to Miami to film Step Up Revolution. In our first year of dating we were separated for nine months.”

“Thank God for Skype, email, picture texts, any form of communication,” Boss added. “The LXD tour was international, so when I couldn’t call, I would write pages and pages of emails.

Boss already knew Holker’s daughter, Weslie, before they started dating, having met her on set, but she says she cautiously didn’t include Boss in mother-daughter time until about six months into their relationship.

“Eventually it grew to where it is now—it’s like she has a second daddy,” she told Dance Spirit. “Their relationship is so beautiful, it makes me want to cry. She loves him so much, and he is such a good example of what a man should be.”

Boss and Holker got married on Dec. 10, 2013, at Nigel Lythgoe’s Villa San Juliette Vineyard and Winery in Paso Robles, Calif., because SYTYCD peeps really did become a second family for both, even before they joined forces to have their own family. They had six former show contestants in the wedding party, including Travis Wall as one of two bridesmen on Holker’s side, while Comfort Fedoke was a bridesmaid for the groom (a groomaid?).

And yes, the newlyweds performed a routine at their reception, to Justin Bieber’s “Somebody to Love.” Their first dance after saying “I do” was to Adele’s “One and Only.”

In the fall of 2014, Holker joined Dancing With the Stars as a pro and stayed for three seasons, up until she got pregnant. She and Boss welcomed son Maddox Laurel Boss on April 10, 2016.

Holker went back for another season of DWTS six months later, but decided season 23 would be her last. Boss, in addition to his Ellen gig, was a team captain on SYTYCD in 2015 and started a clothing line, Boss Empire. The couple also, although they don’t make a habit of performing professionally together, eventually decided that they could mix business with pleasure, signing on to host Disney’s Fairy Tale Weddings in 2018.

And now Boss Baby No. 2, and Holker’s third child, is due in less than two months—it’s a girl—and they haven’t stopped loving, dancing, communicating and, also key, making each other laugh. For Boss’s birthday today, Holker bought a bus bench ad for her husband in North Hollywood, so he would see it every day when he goes to work on Ellen.

“You make our family laugh and smile everyday,” she wrote on Instagram, “and I wanted a gift that showed the kind of love our family shares so it only seemed right! A bus stop bench! I hope that every time you pass this your reminded of our love and giggle a little.”

Excuse us while we swoon. Luckily, there’s a bench for that.