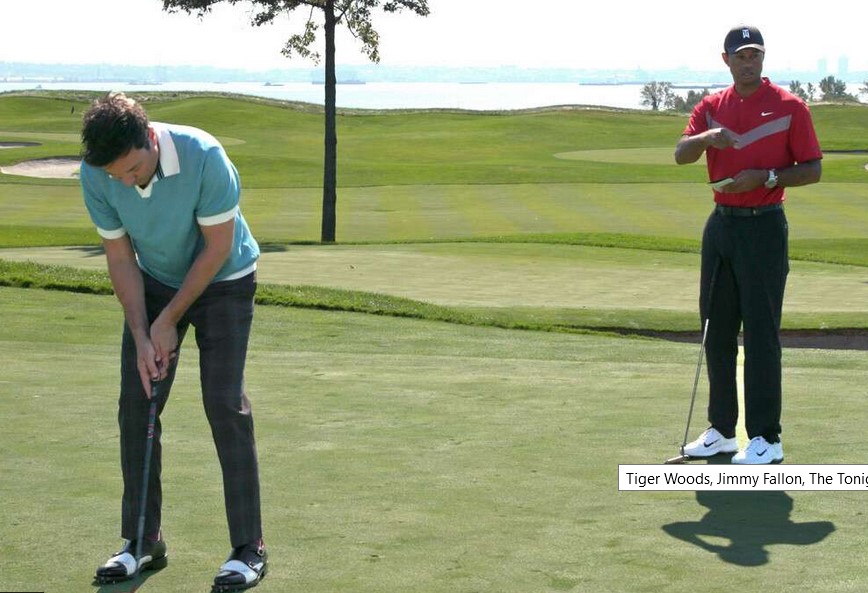 During a hilarious The Tonight Show Starring Jimmy Fallon sketch, Fallon and the athlete headed to New Jersey for a harmless round of golf. After Fallon miserably failed on the eighth hole—he shot a whopping 15—the duo trekked over to a sand trap to retrieve one of Fallon’s balls. As he raked through the hole, the late show host gave himself a much-needed pep talk, calculating his next moves: “If I get a hole in one for the next nine holes…”

But as he dug through the sand, he stumbled upon something a little more interesting than his missing equipment. “Dude,” he said to Tiger. “I think there’s something down here.” To which the legend replied, “It’s Jersey. It’s probably a body.”

Fallon wasn’t convinced. “No, no, no,” he said. “There’s, like, something buried. Tiger, I think there’s a buried treasure.”

The two, in a great display of physical comedy, then dug through the sand like children, working vigorously until they uncovered a metal box. “It’s locked,” Woods noted in disappointment. “How are we going to open it?”

After exchanging a mischievous, knowing glance, they got to work. Next thing you know, Fallon was holding the box steady as Woods geared up to hit the lock off with his club.

“I’m not going to hit you!” Woods exclaimed as Fallon winced in fear. “I know what I’m doing, idiot.”

And just like that, the box opened opened to unveil the most glorious treasure there is: 20 percent off at Bed Beth & Beyond! A rare find, indeed.

(E! and NBC are both part of the NBCUniversal family.)