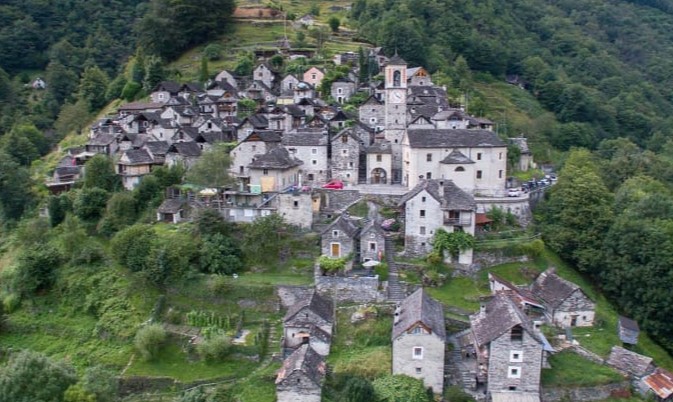 Swiss village that wants to become a hotel

The tiny mountain village of Corippo, arranged higgledy-piggledy on the green slopes of southern Switzerland’s Verzasca valley, looks like something out of a fairytale But here, in what is Switzerland’s smallest municipality, the citizens are facing a harsh reality. What was once a thriving farming community of around 300 people has dwindled to just 12 residents, 11 of whom are over 65. Today, the only economic activity in the town is the local osteria, a rustic restaurant. Here, in the Italian-speaking part of Switzerland, not far from Lacarno, Corippo’s slate-roofed buildings, built from local Ticino granite, have remained largely untouched for centuries — but it’s now on the verge of becoming a ghost town.

However, all’s not lost. A local foundation, Fondazione Corippo 1975, has come up with a novel way to save the village: Corippo is set to become the country’s first “albergo diffuso,” or scattered hotel. Borrowing a model that’s already proven successful in Italy, around 30 of the village’s 70 buildings — slate-roofed, built from local Ticino granite, and centuries-old — are to to be converted into vacation cottages and hotel rooms. It will, says Fabio Giacomazzi, an architect and president of the foundation, give visitors “the chance to experience a very particular sojourn in a genuine rural village that remained practically the same since 1800.”

Aside from soaking up the atmosphere of an authentic Ticino village, guests will also be able to hike through the region, visit cultural sites and enjoy the local gastronomy. “The idea emerged in the ’90s,” says Giacomazzi. “The original idea to bring back permanent inhabitants was [no longer] feasible, because the buildings are too small and not directly inaccessible by car.” And now, finally, things are starting to happen. The first cottage, the two-bedroom Casa Arcotti, opened to guests in late July 2018, while the hotel proper is scheduled to open Easter 2020.

The full three-stage restoration plan — which comes with a price tag of around $6.5 million — would see the osteria expanded and refurbished, in order to become not only the hotel’s dining room but also a reception and meeting point. The public squares in front of the town hall and church are to become open-air communal spaces, while a mill, a bakery and a chestnut-drying room are also slated for renovation. There are also plans for landscaping, and the reintroduction of goat farming, as well as rye, hemp and chestnut trees.

The project is not yet fully funded, although the New York Times reported in August 2018 that $2.7 million had been raised so far, through public funding as well as bank loans. There’s been a lot of international interest in the project, with visitors keen to immerse themselves in Swiss village life. And in 2017, the project won the Swiss hotel and restaurant association Gastrosuisse’s Hotel Innovation Award. However, there are some question marks as to the feasibility of the project.

With such a small, aging population, there are relatively few people available to greet the visiting tourists. Concerns have been expressed about whether efforts should be focused on fixing infrastructure issues like poor water supply instead of attracting travelers. Giacomazzi says the hotel concept could boost resident numbers. “We hope that the hotel will offer the opportunity for a young family to undertake the management and to settle in Corippo together with some employees,” he says. The plan is also to attract craft traders to the area, to further revitalize the village.