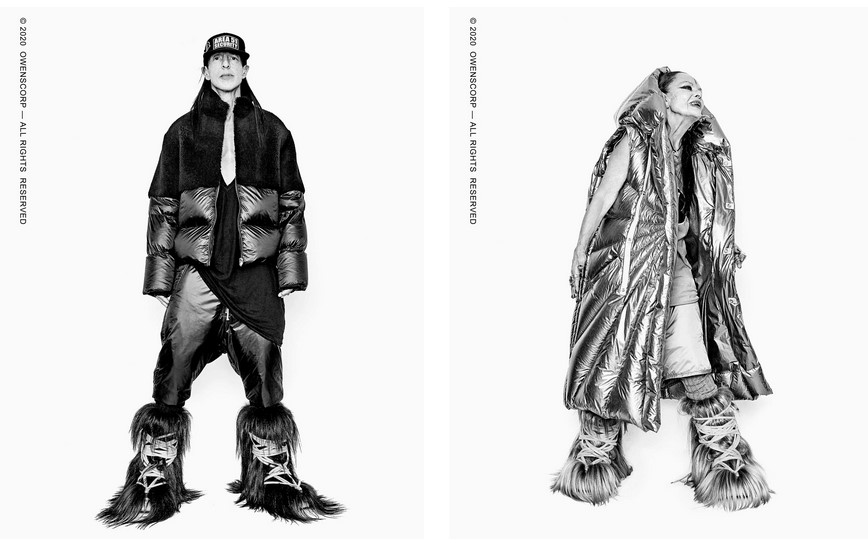 Rick Owens is a world builder, a creator with the self-assured authority that allows any item or idea to be Owens-ified. It’s best evidenced, of course, in his fashion and furniture design—but those are just the two most readily available products that he makes. Think bigger; think of Owens’s entire life, a place where sphynx cats roam a brutalist palace in Paris, where platform disco boots are worn on the metro, where dyeing one’s own hair is a trancelike ritual. Owens’s latest endeavor sees the designer offering a whole new way to enter his universe: via a tour bus.

The Rick Owens express will be rolling into Milan Wednesday as a part of a collaboration with Moncler that includes ready-to-wear pieces designed for Owens and his wife, Michèle Lamy, as well as a custom bus. While the project will launch at the same time as Moncler’s 2020 edition of its Genius Project, Owens’s collaboration is totally separate. “I’m not sure I’m really a group person,” he slyly says over the phone from his home in Paris, where he’s just risen from his daily afternoon nap and will soon head to Milan to prepare his presentation.

Still, when Moncler came calling Owens chose not to resist. “Collaborations, under the worst of circumstances, are all about sensation and hype. There’s no one more conscious [of that] than I am.” he says. “I mean, I’m the first to roll my eyes about the collaboration thing, but the other side of me thinks that any excuse for people to intersect, especially in the fashion world—and especially somebody like me—to go out and kind of intersect with other fashion bubbles, is something I really approve of. I also thought it would be fun to take the whole collab dynamic and instead of making it all about being outward and all about display—I mean there’s plenty of display here, obviously!—to turn it around and make it a story about intimacy, about authenticity, and about a relationship. It’s an insular story about privacy, about personal intimate space.”

The personal motivator for Owens to accept Moncler’s offer was an invitation from the artist Michael Heizer to see his monumental land art piece, City, in the Nevada desert. He and Lamy had been wondering how and when to make the trip out West to see the piece. “It’s spooky and it’s eccentric and it’s extreme and it’s heroic and it’s kind of an underground thing—and I just couldn’t resist. I mean, I jumped at the chance,” Owens says. Where does Moncler come in? The Italian outerwear brand worked with the designer on a collection that re-fabricates some of his and Lamy’s most-worn garments into high-puff Moncler down. It also facilitated Owens’s collaboration with a tour bus company, creating a brutalist bus to transport Owens and Lamy from Los Angeles, where he would be signing his latest set of books, to the desert.

“So it all came together and I thought, Okay, well, we’ll do this,” he continues. He arrived in Los Angeles in October, his first time in the city where he started his career in 18 years, and embarked on the ride to Garden Valley, Nevada, with a stop in Las Vegas along the way. “Going to L.A. actually ended up being a lot better than I thought it would be. I thought that I would be a little uncomfortable retracing the steps of where I had been unformed: growing pains and frustrated and struggling,” he says. “But actually it was really lovely. Going back to your origins stronger than you left them is a very profound thing. Not in a gloating way, of course, but I mean the circumstances are way different and that was moving.”

The journey to Heizer’s piece was entirely Moncler-ified, with Owens and Lamy traveling on a matte black tour bus that replicates the stark aesthetic of their Paris and Venice homes. Says Owens: “It’s exactly like my house, all the interiors, all gray. I use these army blankets—I’ve been using them since Hollywood Boulevard—to upholster the interior. I’m referring to Joseph Beuys and how he created this insulation [in his work]. Army blankets, also, have been these kind of talismans to protect people going to war. The blankets come back and sometimes they come back alone. And there’s something about that…. I don’t endorse war at all and I’m not celebrating it or glamorizing it, I’m just thinking, It’s the story of life. It’s the story of conflict and how to protect yourself from conflict.”

The insulated Rick Owens experience only gets more insulated when you enter the bedroom. “The bedroom is all insulated in Moncler nylon duvet. There are duvets everywhere,” he says. In a photograph that accompanies the collaboration launch, Owens and Lamy lounge in the bed watching the 1923 film Salomé, starring Alla Nazimova. On the actual journey they listened to Lavascar—Lamy’s band—and Gesaffelstein. “We were listening to them a lot because when we would go on trips, we kind of obsess over some band or something and we just listen to it the entire time,” Owens says. 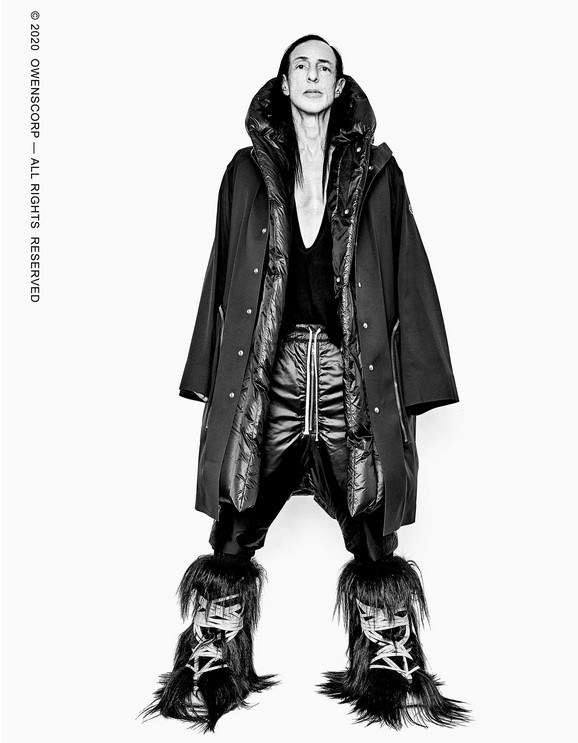 When not lounging in bed, Owens and Lamy wore custom Rick Owens x Moncler ensembles based on existing Owens silhouettes. “I was really thinking, If I’m going to do this, what would we wear? How can I make this as real as possible?” the designer says. “I mean Michèle and I both love duvet; I rarely wear leather. Well, actually, I’m wearing a leather jumpsuit just because it’s very New Wave and it’s a little over the top. But, I mean duvet is the most sensible thing. It’s warm, light, and just crushes up,” he pauses. “I mean, listen to me promoting duvet! But it’s true. It’s really what I wear all the time.”

The garments will go on sale this year in Moncler and Rick Owens stores as well as online. You can buy the bus through a custom order. Expensive? “Of course, it’s expensive,” Owens says with a laugh. “It’s a fortune.” The puff coats and shorts promise a more affordable bit of insulation.