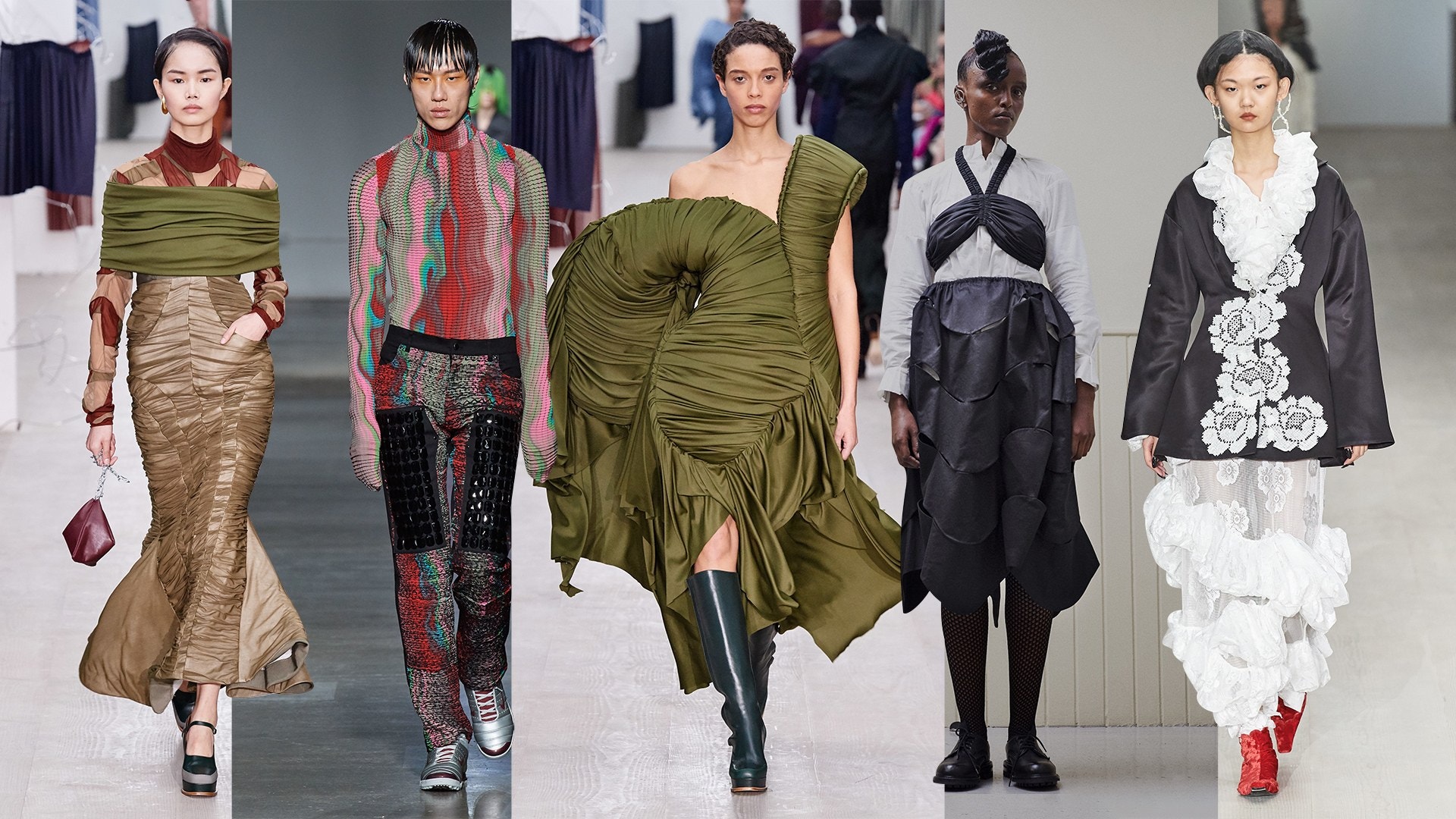 In London, the Next Generation of Designers Are Building a More Meaningful Future

The walls of Brexit haven’t gone up yet, but as of the 31st of January, they’re officially under construction. This week marked the first season of London Fashion Week to be held in the wake of the United Kingdom’s withdrawal from the European Union, meaning much of the conversation has inevitably turned to where the country’s fashion industry will find itself in a year’s time. Until the transition period ends on December 31—after which the country will be leaving the E.U.’s customs union and single market—any conclusive answer to this question remains difficult to say.

But political instability hasn’t put a stopper on British creativity before, and it doesn’t seem likely to now. As if instinctively pushing back against the nationalist rhetoric plastered daily across U.K. tabloid headlines, the support for storytellers celebrating London’s multicultural spirit through fashion has only continued to swell. And proof of London’s ongoing appeal lies not only in the second- and third-generation British talents continuing to proudly plant their flag here—Grace Wales Bonner, Nicholas Daley, Ahluwalia, and Paria Farzaneh were all highlights once again at last month’s menswear shows—but also those who have the conviction to ground their operations within the city right now.

The Chinese designer Yuhan Wang showed her first collection independent from the Fashion East incubator program on Friday, and was also shortlisted this week for the LVMH Prize. Having recently received a U.K. Exceptional Talent visa, she joins the likes of the Korean designer Goom Heo and the Indian designer Kaushik Valendra, both of whom are fully committed to building their businesses within this diverse community of London designers. If that’s not testament to the dynamism of London’s fashion scene in 2020, then what is?

The conversation around the fluctuating fortunes of the big four fashion weeks will always swirl, but the brands who impressed most in London this week were those paying that little mind. Cheeringly, it’s the stiller, smaller voices that have spoken the loudest this season; those happy to cut their own, boldly new paths with a minimum of clamor or fuss. The notion of establishing a global megabrand holds little appeal to these designers not simply due to the overwhelming workload, or the well-documented risk of burnout. It goes against their very principles—and for them, principles come above all else.

The most obvious area in which this rings true is London’s place at the forefront of the conversation surrounding sustainability. For many, the actions taken to combat climate change by major fashion houses—largely via initiatives that are heavily publicized, but carry negligible benefits when held against the brand’s wider impact—have been met with cynicism. They can feel at best glib and insincere, at worst, a Band-Aid on a bullet wound. The designers in London making real strides in this area knew that already. Few are willing to define themselves solely by a word as nebulous and regularly misused as sustainable, when for them, it’s so fundamental; so deeply embedded in what they’ve been doing from the very beginning.

Emerging as the unlikely ringleader on this front is Phoebe English, who despite launching her label in 2011, has hit a second wind in recent years with her meticulously researched and genuinely groundbreaking forays into the future of sustainable fashion. It isn’t just her compostable packaging or buttons made from milk proteins that impress, either, but her belief in radical transparency: English spoke to Vogue in September of last year about the community of designers she’s building through group sustainability meetings held over WhatsApp, where these discoveries can be easily shared.

The Irish-born designer Richard Malone, meanwhile, showed his collection on Friday afternoon, once again proving his alchemical ability to craft upcycled fabrics into something strikingly luxurious, and to transform plant-based dyes into a kaleidoscope of color. This time, what impressed most were the thoughtful methods he’s been embracing to work more responsibly across all levels of production—a commitment to social justice that was part of the jury’s decision to award him the International Woolmark Prize yesterday. Malone noted his pledge to paying his tailors and pattern-cutters an hourly rate well above industry standard; so too do his dyers and weavers working abroad earn four times the fair-trade average. Again, Malone’s priorities don’t lie in securing dozens of new stockists each season, or selling thousands upon thousands of dresses. It’s about finding a new method of building a fashion business from the ground up, that’s sustainable in every sense.

Perhaps the real reason why some may have mistakenly interpreted London’s fashion scene as hitting a wobble—or for those using more drastic terms, as entering a moment of decline—is simply that the eclectic tapestry of London design talent today defies neat categorization. Sure, there isn’t the kind of tidy cohesiveness that makes for bold, impactful headlines, but that feels like something to be admired. The most exciting designers working in London today are content to forge their own paths, to expand their businesses at their own pace, and to remain conscientious at every step.

Gone are the blazing egos and fierce competitiveness of decades past. (Well, maybe not quite yet—fashion without a little competitiveness would be boring, after all.) London’s current crop of emerging designers are more likely than ever to be spotted attending and applauding each other’s shows, or pooling their knowledge and resources freely with each other over social media. They may not be breaking the mold with the same bombast and spectacle as those of decades past, but that’s because they believe in a future for fashion that’s smarter, kinder, and possesses a greater generosity of spirit. In 2020, that’s a real success story.