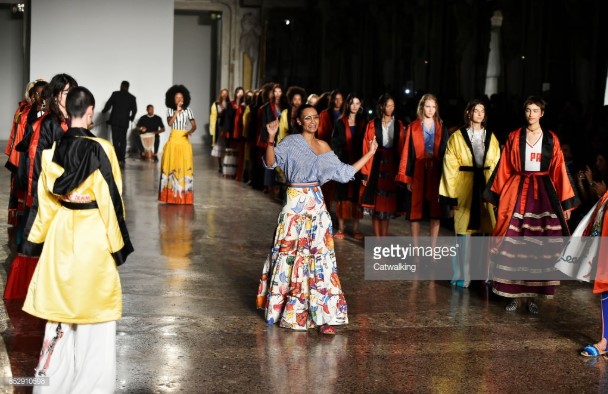 If London is the fashion capital known for its hot young things, and Paris is the city of couture and history-laden heavyweights, then Milan sits somewhere in the middle. Once synonymous only with the glamour of the big names — Armani, Gucci, Prada, Dolce & Gabbana — in recent seasons the city has become a hotbed for new labels pushing to the fore. The likes of MSGM, Marco de Vincenzo, No. 21 and GCDS are now all commanding the same attention and column inches once reserved for the power players. Presenting new perspectives on Italian fashion, these brands have saved the city from going stale.

But the fashion industry on the whole — regardless of country — is in a state of flux, facing tough questions on equality, diversity and relevance in 2018. With this in mind, it wasn’t just the clothes that had people talking. Here are five of Milan’s key takeaways.

It’s no secret that fashion week needs to up its game when it comes to racial diversity, and, historically, Milan has lagged on this front. Last season, only 27% non-white models were cast.

But this season, there seemed to be a notable increase. Model Winnie Harlow opened both Byblos and Philipp Plein, while Fendi was opened by Adwoa Aboah and closed by Adut Akech. Philipp Plein, often one of the most divisive shows of the season, was one of the front-runners when it came to racial diversity: about half of his cast were models of color, including hijab-wearing model Halima Aden.

Age came into play too. Designer Erika Cavallini cast a group of older women to walk, a refreshing change that won’t go unnoticed by her customers.

During Milan Fashion Week, the New York Times released a damning exposé detailing the exploitation of female workers at the bottom of the manufacturing chain in southern Italy by luxury Italian brands, including Max Mara and Fendi. While the National Chamber of Italian Fashion sent out a press release trying to reframe its findings, the report kept the politics of fashion at the forefront of everyone’s minds.

On the runway, gender politics were most astutely dissected by Miuccia Prada. The Prada collection was borne of the tightrope we walk between conservatism and liberalism, provocation and virtue. The prim elements — knitted jumpers over white shirts, long skirts — featured revealing cut-out details on the bust and back and were juxtaposed with transparent knee-high stockings and awkward sock-cum-sandals in jarring bright colors for off-kilter sex appeal.

Versace, too, was a celebration of womanhood, with Donatella Versace dedicating the show to powerful, fearless women everywhere. The collection of unashamed, modern glamour was made to accentuate and sculpt the female form fit the current moment perfectly. And the cherry on top? Nineties supermodel Shalom Harlow closing the show after a six-year runway hiatus, showing the Insta-generation just how it’s done.

Doing it for the ‘gram

In Milan, a city that lives for glitz and glamour, “less is more” does not apply. And when it came to this season’s shows excess was definitely on trend, with social media playing perhaps the biggest part in some designers’ decisions. Emporio Armani went for gold by taking over part of the city’s Linate Airport, ushering some 2,500 guests through security and departure gates into a hangar — which is already normally emblazoned with the brand’s name and logo — for pre-show cocktails and mini hot dogs. The show itself, held in a purpose-built stadium within the hangar, was the Instagram success the brand was no doubt vying for — perhaps the most valuable currency of a fashion show now.

Elsewhere, Moschino’s sense of humor provided plenty of Instagram fodder, with Jeremy Scott choosing to show an “unfinished” collection which had been scribbled over with colored markers. A shrug seemingly fashioned from an oversized tape measure and Gigi Hadid in a wedding dress surrounded by floating butterflies were particular hits.

And finally, it wouldn’t be Milan Fashion Week without a spectacle from Philipp Plein, the self-proclaimed “king of bling.” The designer may have taken stick in the past for his over-the-top collections, but it’s undeniable that he understands the power of social media as a tool to elevate his brand’s star power.

The collection, inspired by Michael Jackson, was wholly predictable, yet the addition of Chris Brown, Rita Ora, rapper 6ix9ine and a troop of burlesque performers made Plein’s show a viral sensation.

“Social media changed the whole game for fashion,” Plein said in an email after the show. “More and more brands choose a similar formula to mine … Now everyone invites celebrities and performers, but when I started I was the only one doing that in Milan.”

The United Sates may be gripped by political turmoil, but designers are still finding inspiration in the country’s sunnier days. Fledgling brand Brognano took its cues from the surfer community of the Californian coast for their first show, an influence shared by Etro, who went one step further and cast professional surfers as models.

Elsewhere Byblos looked to the Nevada desert and Burning Man, citing its vibrancy and radical nature as key influences for Spring-Summer 2019. MSGM found peace and love in tie-dye, while rising star Marco de Vincenzo called on the childhood memory of an aunt visiting his home in Sicily from the US, bringing little pieces of American culture with each visit. The collection was a hybrid, a tale of two contrasting countries, the urban and the rural, or as the designer stated, “the drama and vitality of Sicily and the innocence and optimism of America.”

For several years now, sportswear has been making itself heard on runways around the world, from the ugly trainer craze still sweeping the fashion industry to canny collaborations — most recently between Fila and Fendi, who teamed teaming up for next-level amounts of logomania (seen front row on Nicki Minaj at this week’s Fendi show.)

But Spring-Summer 2019 is throwing us up a new one: cycling shorts. A trend that has been bubbling on Instagram for a while now — see Kylie Jenner’s skin-tight ensembles — Lycra has gone luxe. And in Milan they were everywhere: We saw navy ones on Bella Hadid at Fendi, fluorescent ones at Blumarine, printed ones at Prada, and baggy ones at Sportmax. Something for everyone, it seems. 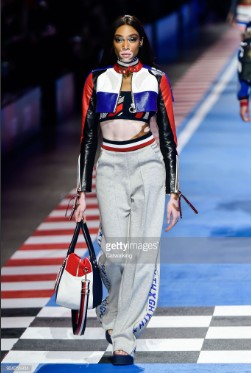 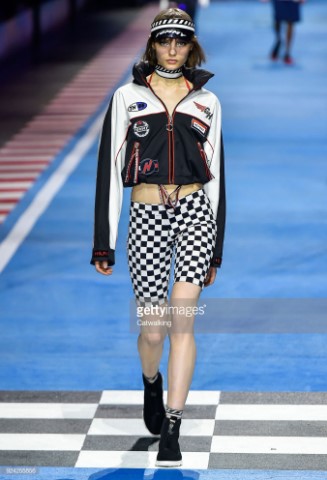 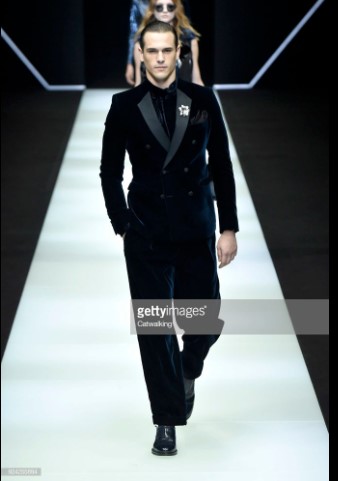 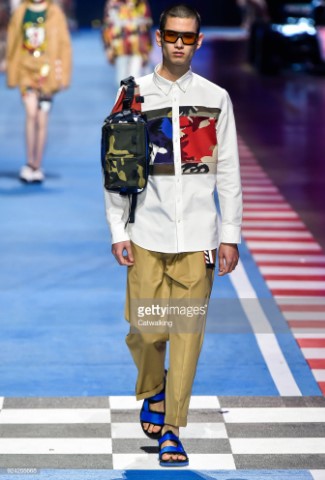 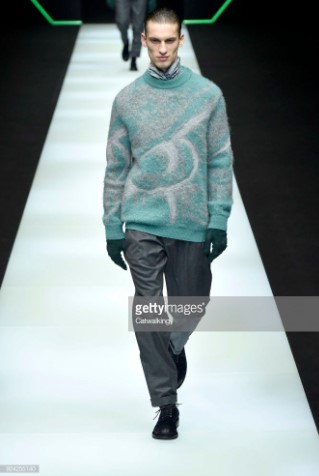 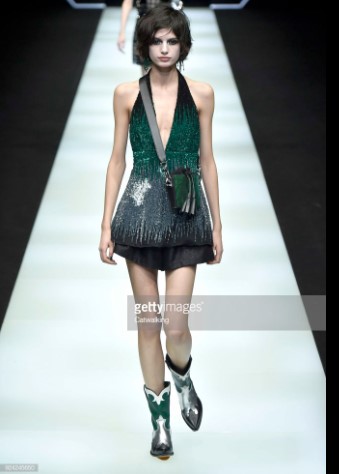 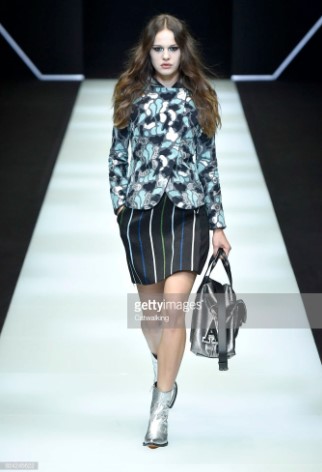