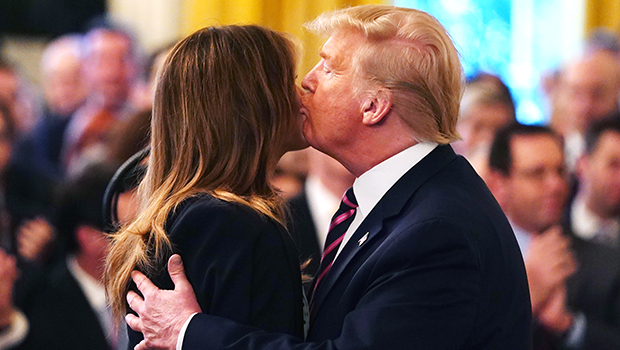 Donald Trump was in high spirits after the Senate acquitted his charges in his impeachment trial. But Melania didn’t return the POTUS’ celebratory kiss in these photos snapped at the White House on Feb. 6!

Donald Trump, 73, may still be president, but First Lady Melania Trump, 49, still won’t meet his lips! It was one day after the POTUS had been acquitted of his impeachment articles on Feb. 5, and Melania was standing by the POTUS’ side as he broke his silence on his victory in the East Room of the White House. But when Donald helped Melania onto the stage, he puckered up and leaned in for a kiss — which landed on Melania’s cheek! It appears the First Lady turned her head, making for an uncomfortable moment to watch.

Despite the awkward interaction, Donald proceeded to show his gratitude for his family, Melania included. “So, I just want to thank my family for sticking through it. This was not part of the deal. I was going to run for president, and if I won, I was going to do a great job,” Donald told the crowd gathered in the room, in which Donald’s daughter Ivanka Trump, 38, and Barron Trump, 13, could be found.

Earlier in his speech, Donald also gave shout-outs to Ivanka and Barron. “I want to apologize to my family for having them have to go through a phony, rotten deal by some very evil and sick people,” Donald said at the mic, before Melania joined him. “And Ivanka is here, and my sons, and my whole family. And that includes Barron. He’s up there, he’s a young boy. Stand up, honey. Ivanka, thank you, honey.” 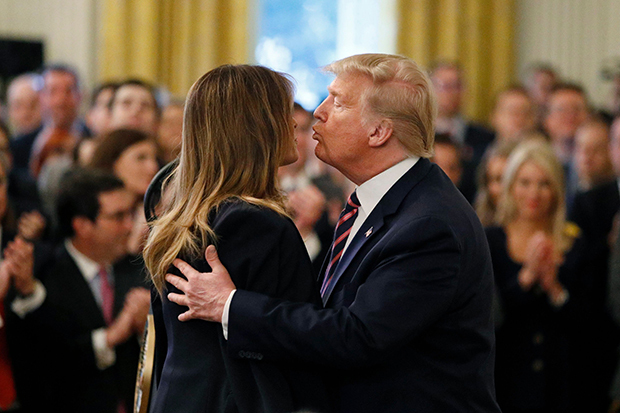 During Wednesday’s impeachment trial, Donald was acquitted on both of his articles of impeachment: abuse of power and obstruction of Congress. However, every Democratic senator made the vote to convict Donald on the two impeachment articles (even Republican Senator Mitt Romney, surprisingly, went against his own party by voting to convict the president). This means Donald won’t be ousted from the office, but the presidential election in Nov. 2020 will determine if he’ll keep his presidency or hand over the baton to another commander-in-chief.

Donald’s long-running trial began when the House of Representatives impeached him in Dec. 2019, following outcry over his phone call with Ukraine President Volodymyr Zelensky in July of 2019. He reportedly pressured Volodymyr to investigate his election rival Joe Biden and the former vice president’s son, Hunter Biden. That would be a big no-no for a president, since Donald was withholding military aid from Ukraine during that time.