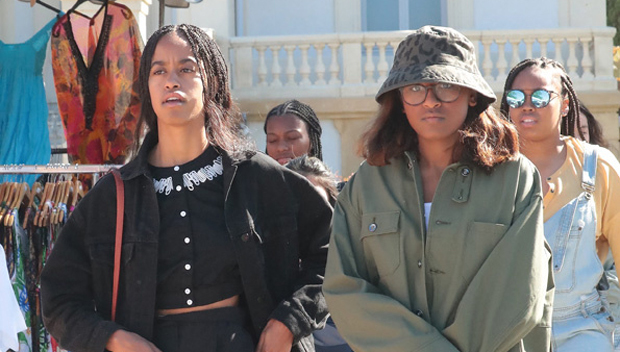 It’s safe to say Malia and Sasha Obama are having one of the best summer vacations that any college coeds could hope for. They’re on a family getaway in southern France with their parents, former President Barack Obama, 57, and First Lady Michelle, 55, and hanging out with some very famous folks. On June 21, the family headed out to lunch to the 2 Michelin-starred La Chèvre d’Or restaurant in Eze, France with U2 frontman Bono, 59,  and guitarist The Edge, 57,  and the two young ladies went for very different looks which you can see here.

Harvard student Malia, 20, went with an athletic outfit consisting of a black sports bra and high-waisted long shorts. She sported trainers on her feet and Adidas logo socks while pulling her long braided hair back into a pony tail. She’s proven to be a fan of the athleisure look on the trip, as she wore a white sports bra and similar black shorts while hiking around the hilltop village of Gordes on June 18.

Incoming University of Michigan freshman Sasha, 18,  on the other hand went with a summery black sun dress with white floral patterns across the chest and a panel of yellow vertical stripes down the front. It featured spaghetti straps, a knee high left slit and the recent high school grad accessorized with a gold crucifix pendant around her neck. Sasha sported a hot pink manicure, as her nails matched the cover of the phone she was holding. She’s been a fan of sun dresses, wearing a similar frock in yellow on a Father’s Day outing to the Palais des Papes in Avignon on June 16.

The former first family arrived in Avignon, France on June 15, just a few days after Sasha graduated from high school outside Washington D.C. They’ve gone sightseeing around southern France, toured a vineyard and dined and the finest restaurants. Meanwhile, the girls have had some outings of their own, touring the L’Isle-sur-la-Sorgue street market. Their next stop is a jaunt over to Italy’s Lake Como where they will join George Clooney, 58, and his wife Amal, 41, at his Villa Oleandra for two days. The former first couple is scheduled to attend a charity dinner for The Clooney Foundation for Justice on June 22.