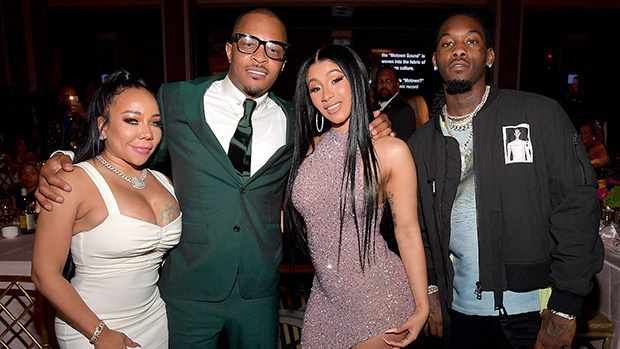 A double date with double the trophies! T.I., 38, and his wife Tameka “Tiny” Harris, 43, ran into none other than Cardi B, 26, and her husband Offset, 27, at the ASCAP Rhythm & Soul Awards in the Beverly Wilshire Hotel in Los Angeles on June 20. Tiny and Offset were playing cheerleaders for their respective spouses, who both scooped major awards on Thursday night — T.I. took home ASCAP’s first-ever Voice of the Culture Award, which honored both Tip’s music contributions and his “active role in philanthropic and community transformation efforts through his non-profit, Harris Community Works (HCW),” according to ASCAP’s press release. Meanwhile, Cardi became the first female rapper to receive the Songwriter of the Year award (the award show has been running for 34 years, as of 2019).

The following day, Tiny took to her Instagram to reflect on the successful night. The Xscape member first shared a girls’ photo with her daughter Heiress, 3 (the tot was preoccupied with a phone) and Cardi. “Out celebrating @troubleman31 First ever #VoiceOfTheCulture award