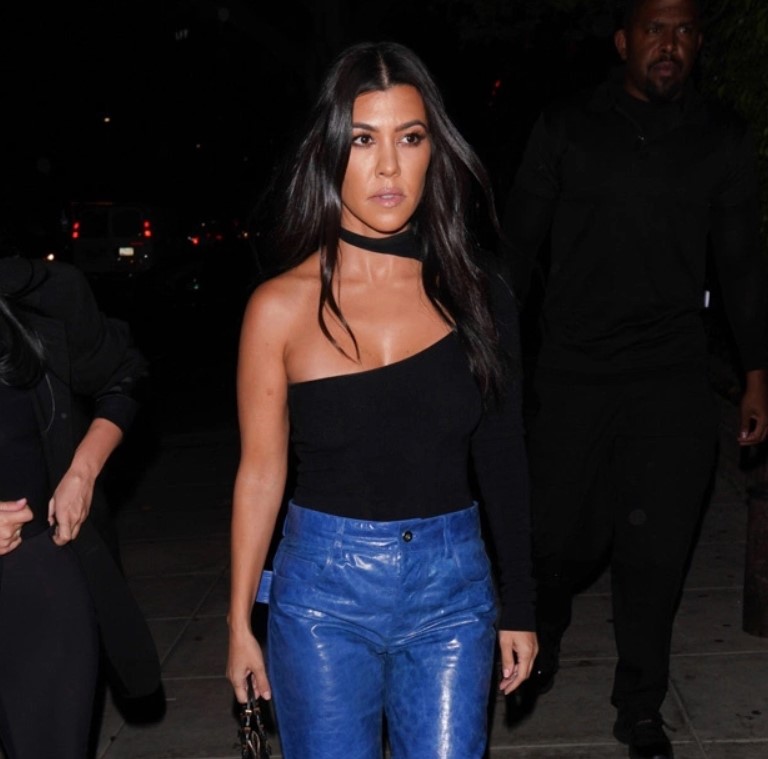 Kourtney Kardashian, 40, sure knows how to turn heads! The mom-of-three stunned in her outfit while out and about in West Hollywood last night, donning a sexy one-shoulder top that showed off her super-stoned arms and just the right amount of cleavage. The black asymmetrical cut-out top also featured one long sleeve, giving Kourtney’s outfit an edgy vibe as she dined at popular LA restaurant Nobu. Kourtney also rocked a pair of blue leather pants — which are nearly impossible for the average person to pull off — but it’s safe to say that Kourtney totally slayed in them!

The Keeping Up With The Kardashians star finished her edgy, rock ‘n’ roll-inspired look off with black pointed pumps, and kept the rest of her look chic and simple, opting to forgo any jewelry. Kourtney wore her gorgeous, shiny black hair down in loose waves and parted down the middle, and went for a nude, natural makeup look. She accessorized with a small black clutch, which was the perfect way to round out her edgy ensemble!

Although it’s unknown who Kourtney was dining with, in a recent clip for an upcoming episode of Keeping Up With The Kardashians, Kourtney revealed that she’s “content” in her life and doesn’t need a man. ““I just feel like I’m in a different place where I just don’t feel like I need that. I’m just content hanging out with my friends,” she said. “My energy isn’t going towards partying or guys. I’d rather hang out at the house and be silly and you know dance and whatever instead…I just don’t feel like I need anyone else to hang out with, texting random guys that are meaningless.”

That hasn’t stopped potential suitors from shooting their shot, though! Shahs Of Sunset star Mike Shouhed, 41, flirted with Kourtney on Instagram on Oct. 12, leaving a fire emoji on one Kourtney’s sexiest pics to date. However, an insider close to the Bravo star EXCLUSIVELY told HollywoodLife, “Mike loves women and loves to flirt with them. He loves to find them on social media, whether it’s Facebook or Instagram. And he actually goes out with women all the time that he meets on social media!”

“Mike wasn’t under the impression that leaving a single emoji in a sea of hearts and flames from thousands of her fans would grab her attention,” the source continued. He doesn’t know Kourtney personally. He just thinks she’s really beautiful and he loves to be a flirt, which is why he left the comment. If she’d go out with him I’m sure he’d take her up on that!”