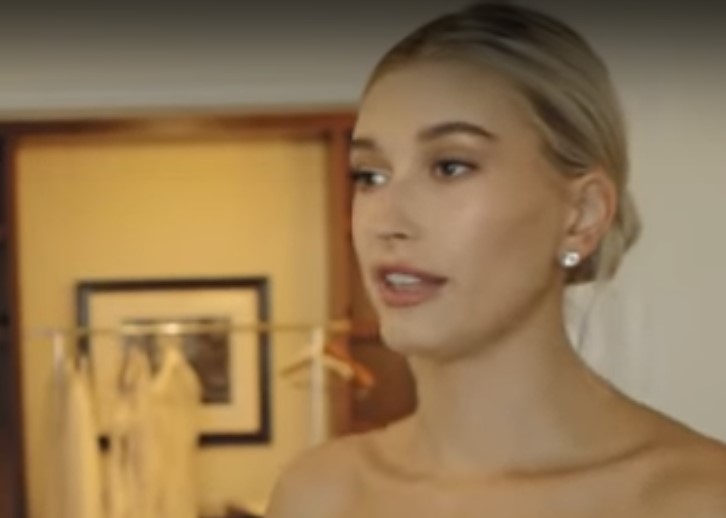 Hailey Baldwin, 22, stunned on her wedding day to Justin Bieber, 25! The model teased she had chosen her wedding dress designer over a year before her intimate South Carolina ceremony, finally revealing the number was by Off-White’s Virgil Abloh on Oct. 7! Hailey and her stylist Maeve Riley gave fans an inside look at the blonde’s third and final fitting in a new video shared by Vogue magazine on Oct. 18.

“When I said I wanted Virgil to do my dress, I didn’t want somebody who was a wedding dress designer. I just feel like my style and my street style is such a part of who I am and Virgil has always just been in my corner since the beginning. And I just feel like it’s cool to see such an intricate gown from him,” Hailey told the magazine at the Montage Hotel in Beverly Hills. “I feel beautiful…it’s perfect.”

Virgil is well-known for his unique style, particularly his choice of including words in quotations on various pieces of clothing. While the dress is fairly traditional at first glance, the devil was in the details. “Virgil and I talked about adding the [Off-White] logo in — if you look closely, there’s pearl details all over that have the Off-White logo. And in the back, [it says] ‘wedding dress’ in his classic quotations,” Hailey’s stylist and BFF Maeve added. The theme continued with Hailey’s epic veil, was featured words “till death do us part.”

Hailey was actively involved in designing her dress, however, and had a vision of what she wanted. “I was specific on the sleeves — I knew I wanted [then] long onto my hands,” Hailey shared. “I knew I wanted it to be this [strapless] silhouette, I knew I wanted my back to be showing.” Ultimately, the dress and veil — both works of art — were made by a team of 20 people at the brand’s atelier in Milan, Italy. The fitted gown did give Hailey a bit of trouble moving at the fitting, prompting Maeve to tease that she needed to “practice” her walk before her trip down the aisle!

“I’ve done a number of red carpet dresses for events before but this would be the first for a wedding especially for a close friend — the gratifying side of designing for Hailey is that I know her personality,” Virgil narrates at the beginning of the video. “For her, I wanted something fun and youthful just the same — but still traditional. What I think is most important for her on this day is showcasing the woman that she is.”

The designer was also thinking about her love, Justin, and creating a moment he would remember for the rest of his life! “I wanted to make something that would make him look in Hailey’s eyes and see that — you know — she’s the most beautiful woman for him. That’s a lot of what the dress silhouette was inspired by is bringing an emotion to the moment that he sees her walk down the aisle with the veil on and lifted up,” Virgil continued. How romantic!

Hailey’s Off-White dress was one of three she rocked on her big day, later slipping into silky numbers by Vera Wang and Ralph & Russo (complete with sneakers).