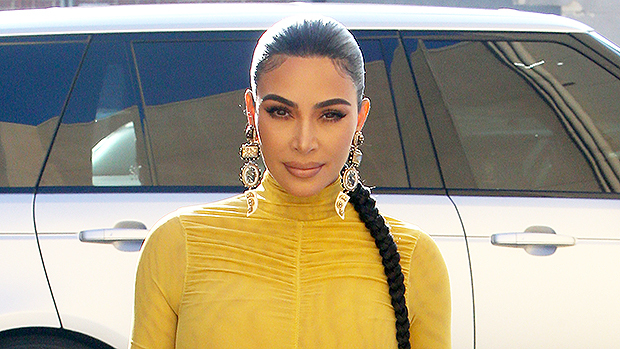 Kim Kardashian posted a throwback photo from her high school yearbook, and fans are losing their minds because she looks just like her daughter Chicago!

Kim Kardashian just shared a MAJOR throwback pic, and fans can’t believe how much she looks like her daughter Chicago. The Skims founder, 39, took to Instagram on Feb. 28 to post a snap from her ninth grade yearbook, and it proved she is such a natural beauty. Kim wears a black polo in the headshot, and rocks a super short bob with one strand of hair on her face. Although it appears her lips are lined and her eyebrows are filled out, she’s wearing very little makeup and looks totally flawless. Fans and friends were quick to notice the parallels between her and two-year-old daughter Chicago.

In a pic shared on her aunt Kylie Jenner‘s Instagram Story, Chicago is wearing a Minnie Mouse headband with pink, polka dot bow, and also has her face painted to resemble Minnie. It appears that the party was a painting party, too, as Chi is in front of an easel with a paintbrush in the images. As for decorations, there was a massive pink and white cake, adorned with flowers and a giant Minnie Mouse figurine on top. The cake sat atop a table that was filled with cookie platters, as well as red, pink and white roses. Chicago’s name was also written on the wall in the classic Disney font.

Chicago is Kim and Kanye West’s third child, coming after her older siblings North West, 6, and Saint West, 4. Her younger brother, Psalm West, turns one in May. They’re seriously the most adorable family, we can’t wait to see more pics as these youngsters grow up!