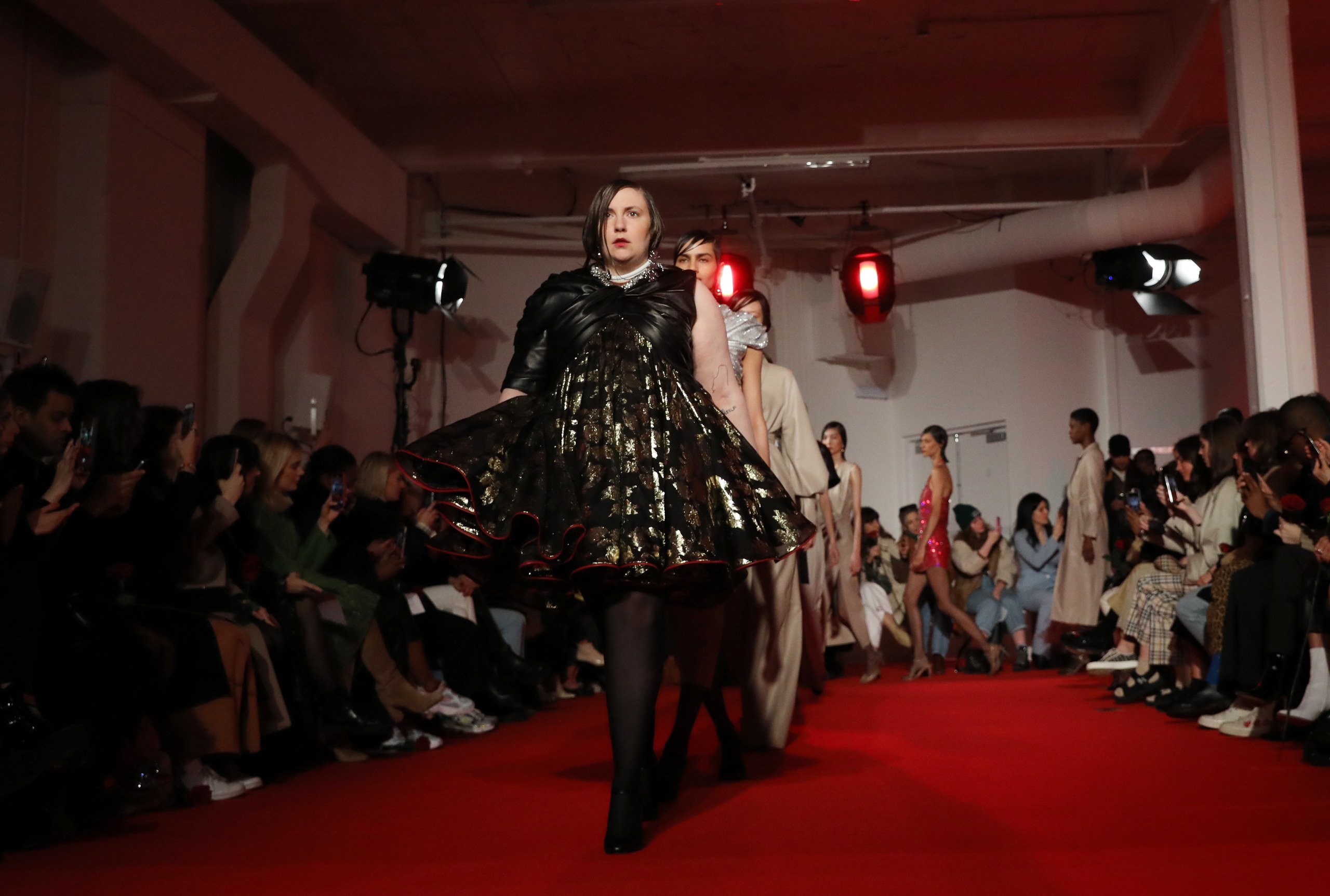 “It’s an adrenaline rush out there,” says Lena Dunham, sitting backstage after making her fashion week debut for 16Arlington, the London-based label founded by designers Marco Capaldo and Kikka Cavenati in 2017. “I have to say, I think I was very coddled today—all of the girls were running and doing their quick changes, but people were there at every juncture telling me where to go, so I feel lucky about that,” she says, before adding, in typically self-effacing style: “It’s hard for me to imagine that I’m going to get a ton of job offers off the back of it, but it was a delight.”

Who’s to say it won’t be her last time walking the runway? With her wet-look hair and dress cut from flouncy black-and-gold jacquard silk, she more than looked the part. Plus, it only takes a brief retelling of the serendipitous series of events that led to this to know that stranger things have happened. “I was introduced to Marco and Kikka through my stylist, Chris Warren, when they did my dress for the Once Upon a Time… in Hollywood premiere here in London,” she notes. “When they asked me to walk the runway for their first show, I was like, of course! I would do anything for you guys.”

The initial dress that led to their introduction was a glitzy concoction of orange sequins and red marabou feathers. The look paid subtle tribute to Once Upon a Time’s exploration of American counterculture with its disco fever energy and was in keeping with Dunham’s ongoing style evolution, which has seen her embrace bigger and bolder fashions as the years have progressed. “It’s my greatest joy to wear things that are a little bit funny,” adds Dunham. “And what I love about Marco and Kikka is that they make something that fits your body beautifully, but also has a sense of humor. When I went to the Once Upon a Time premiere, I was like, ‘I look like a hot Muppet!’”

Despite her rapid ascent to stardom following the buzzy debut of HBO’s Girls in 2012, Dunham has spent the past few years taking something of a step back from the spotlight. In 2018, she worked as a showrunner and writer on an HBO reboot of Julia Davis’s British black comedy Camping; more recently, she spent a summer in Wales directing Industry, another title on HBO’s slate that—perhaps unexpectedly for Dunham—explores the cutthroat world of global finance.

One reason for moving behind the scenes has been her ongoing health issues, about which Dunham has remained candid. In 2018, she wrote for Vogue about her struggles with endometriosis and her subsequent hysterectomy; last year, she revealed her battle with chronic illness in the form of Ehlers-Danlos syndrome. How did this series of major life events force her to reassess her relationship with getting dressed?

“It’s interesting, because for a while I spent a lot of time in bed, so I became obsessed with pajamas,” says Dunham. “I was like, I’m not gonna lie in bed in some garbage. So I texted Leandra Medine to ask her, ‘what are the best pajamas?’ She told me Eileen West, and they were the best purchase I ever made.” Once she entered the next stage of her recovery, she found that her previous uniform—a formula of “skinny jeans and a button-down shirt”—was no longer practical. “Now when I get dressed, it’s hard for me to wear things that are tight around the waist as I’ve had a lot of surgery, so I had to totally change up my deal.”

It was this that led her down a path to a new generation of designers who delight in a specific brand of flounce and frivolity, many of which she regularly posts about on her Instagram account, including Ganni, Molly Goddard, and, of course, 16Arlington. There was also her memorably cheeky red carpet moment at last year’s Met Gala, where Dunham attended with her Girls co-star Jemima Kirke in a pair of delightfully goofy Christopher Kane dresses paying tribute to obscure sexual fetishes. In the time since, she’s become close friends with Kane, having recently exhibited a series of her watercolor paintings in his London flagship store. “I love clothing,” she continues. “And when people notice that I love clothing, it feels really good. For me now, a peasant dress or a funny smock-like shift is just a basic. It’s so trite to say, but you don’t have to trade comfort for style. And there are days where I just need to be cozy, and I’ve had to figure out how to do that in a way that feels like chic to me. It can be a challenge, but I’m figuring it out.”

It’s a challenge made more acute by the unforgiving style maxims of her current hometown of Los Angeles. “In Hollywood, I feel like there’s this almost rule that if you’re not a sample size, you’re supposed to wear a black column gown and just go simple and surprise people with your hair and makeup. I don’t like that rule.” Working on both Camping and Industry further solidified her close affinity for the weirdest and most wonderful corners of British fashion history—she cites legendary fashion eccentrics like Daphne Guinness and Isabella Blow as inspirations for her newfound flamboyant style, adding: “When it comes to fashion, I just want to feel really alive.”

After making her runway debut, however, she’s ready for some downtime. “I feel very high fashion right now, but I think I’m gonna change back into my leggings, sadly,” Dunham concludes. “I’m going to go from a fancy carriage to a pumpkin—but I did try to wear some sassy Malone Souliers shoes today, just to keep the fashion energy alive.” As a newly-minted runway star, we wouldn’t expect anything less.