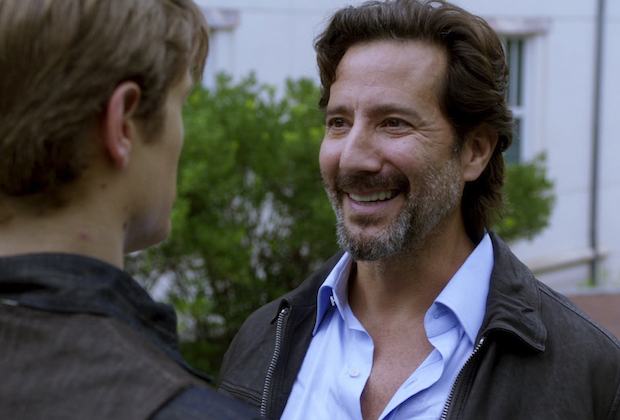 Mac is back this Friday, and he’s acquired a new frenemy, played by Lost alum Henry Ian Cusick. This Friday at 8/7c, the Peruvian-born Scot joins CBS’ MacGyver for Season 4 as Russ Taylor, an MI6 agent-turned-private military contractor who recruits former members of the shuttered Phoenix Foundation to hunt down a bioweapon that a mysterious organization plans to deploy in a devastating attack on a major U.S. city.

If it sounds a bit harrowing, rest assured that Cusick is here (and quite thrilled) to lighten things up, as he details in this TVLine Q&A.

TVLINE | Off the top of your head, give me three adjectives to describe Russ Taylor.

Millionaire… MI6… scoundrel. I think because we [prior to the interview] were discussing Scandal, that’s why I said scoundrel. But there is some truth to that!

TVLINE | Under what sort of circumstances do we first meet him?

Russ Taylor has been following MacGyver, and MacGyver catches onto this and says, “Why are you following me?” Russ Taylor has a reputation — he used to be an arms dealer and do lots of terrible things – so Mac says, “Why would I want to work with you?” Russ says that he has had an epiphany and “changed his ways,” that he wants to be one of the good guys now. Mac’s suspicious, but then they go on a little adventure together. But what’s really cool is that because he recruits Mac, Mac then has to recruit his team.

TVLINE | He’s got to “get the band back together.”

Exactly, and it’s always fun to see where “the band” has gone and what sort of jobs they’re now doing using their talents. But then you learn about Russ and what his true motives are, and why he really asked Mac to help him.

MacGyver CusickTVLINE | As Mac introduces him to the other team members, does Russ share any specific dynamics with any of them?

Well, Matilda [“Matty”] is crucial to the running of Phoenix, and yet here is Russ Taylor, who bought Phoenix. Only one of them is needed, but one owns the whole thing, so they’re sort of loggerheads pretty much through the whole season, which is quite fun. The thing about Russ is even though he’s a skillful manipulator and he can read people very well, and he’s also ex-military, so he’s quite lethal. I have had more fun playing this character than I have had with anything in television.

TVLINE | From the scenes I’ve seen, it looks like you’re having a blast.

He is quite ridiculous, in a way, and it’s a very free environment to work in. When I first turned up for my first scene, Justin Hires (who plays Bozer) just started improvising, and I just looked at him and joined in. I mean, not hugely, but we’d do a few takes and then sort of mess around with a few lines.

TVLINE | You were like, “Ohhhhh, so that’s what we’re doing.”

Yeah, there’s a little banter, a playfulness about the performances. And Justin is very funny, he’s a comedian actor. I took his lead and I’m having a lot of fun bouncing off him. We play the complete opposite of characters, but we have a lot of fun with him teasing me about my accent.

TVLINE | It’s great you get to use your real accent, because we once spoke about how I missed it in the original Scandal pilot.

Right. Right. Yeah, this time, I’m playing myself, my accent, but it’s a bit more cleaned up. It’s pretty much what you hear now, but it may be a little more cleaned up.

TVLINE | Tease best you can Russ’ true motive, because it sounds like we’re getting into some sort of National Treasure/Indiana Jones/Da Vinci Code type of adventure.

This season is more serialized if not less procedural, so we have one archenemy running all the way through it, and the archenemy is Codex. Russ Taylor has a long history with Codex, and that’s one of the reasons he signed Mac up to his team, to get to Codex. We also have a lot of great guest stars coming in — I was very impressed with the people that they bring into the show — and there’s a different tone to it. Even though it’s still fun family drama, it’s a bit darker from previous seasons. I’ve seen clips while doing ADR, and some of it looks really glossy and shiny…. It’s looking really good, I think.

TVLINE | What is something that you, as an actor, have gotten to do for the first time in this role?

What have I not done before…? I was hoisted up through a glass ceiling, which we just did that the other day. [Laughs] I didn’t actually go through it, but it looks like I do. I’m also getting to do a little more fighting, a little more punching, a little bit more gun stuff…. But overall what I’m getting to do is comedy, which I’ve not done on TV before. I feel very light in the show, and I mean that in a sense of having fun. Everything I’ve done before has always been really earnest and….

TVLINE | Russ is more of a dashing rogue.

Yeah, I have to say it’s very freeing as an actor to play this character, very freeing, because basically I can really do anything, and they’ll just say, “Take it down, Ian, you’re going to big,” which is very rare for me because I always play small.