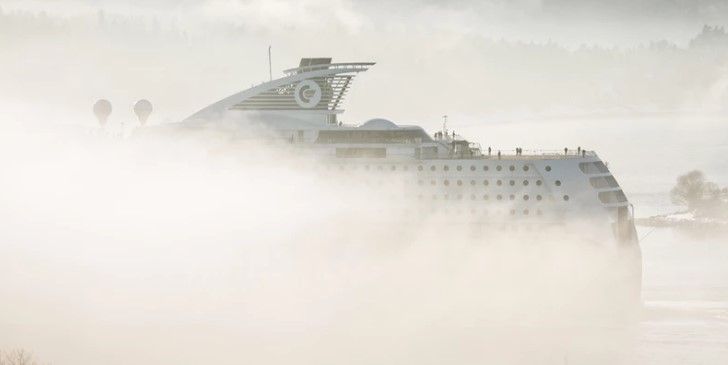 In an age of ever-bigger cruise ships, it can be hard to stand out without constructing something the size of a small city and pushing it out to sea.

Now, instead of just ramping up the scale of their vessels, cruise operators are starting to innovate with boat design, ripping up the rulebooks on marine engineering to create something very different.

The latest example of this is Celebrity Edge, a large — but not super-massive — vessel currently under construction in the Chantiers d’Atlantique shipyard on the northwestern coast of France.

But Edge has something unusual going on inside — an innovative endoskeleton design that owner Celebrity Cruises claims will make seagoing travel more epic than ever.

All previous large cruise liners have relied on centuries-old shipbuilding principles that require a solid hull to hold the vessel together. By shifting the spine to the center, Celebrity Edge’s sides have been opened up — allowing maximum light and the potential to create suites with incredible panoramic ocean views.

It’s been entirely designed using 3D technology, enabling engineers to push the boundaries of what’s possible, while still creating something that can float and withstand the rigors of plying the high seas.

Celebrity says that when Edge’s first passengers set sail from Florida to the Caribbean in December 2018, they’ll be as close to the ocean as it’s possible to get on a cruise ship without, presumably, jumping over the rail.

The price tag for creating this experience is a hefty $1 billion — and there’s a sister ship, Celebrity Apex, due to launch in 2020.

With 28 million passengers expected to take to the waters globally in 2018 (up from 24.7 million in 2017), such a large investment may well be worth it.

But Royal Caribbean Cruises, Celebrity’s parent company, must stand out in a crowded field. Chief rivals Carnival and Norwegian are also building new vessels to capture their slice of an estimated $45.6 billion market.

As morning fog was quickly burned away by a warm sun, the ship emerged, looming over the dockside, by all appearances ready to set sail — minus a neighboring large crane. Celebrity says that as of September 2018, it’s 95.6% ready.

“That doesn’t sound like much to go, but the part to go, that is all the visible part,” says Richard Fain, chairman and CEO of Royal Caribbean Cruises, on hand to give a tour.

There are workmen everywhere. At this point, exploration of the ship requires protective hard hats and goggles. Last minute touch ups to the paintwork are being made in one corner. Wood is being sawed in another. Carpets are being unfurled and cleaned.

The work is intense, but with the ship’s superstructure completed and afloat, Celebrity Cruises is excited about what it believes will be a game-changing design.

“There’s some really innovative design, not least the clever balcony cabins, which are much bigger than those on rival ships, and the Magic Carpet, a platform that serves as an al fresco restaurant suspended over the side of the ship. On a warm night in the Caribbean, I reckon that will be the hot ticket for dinner.”

Bryant adds that the ship could attract the attention of the millennial market — “people who might previously have considered themselves too cool for cruising.”