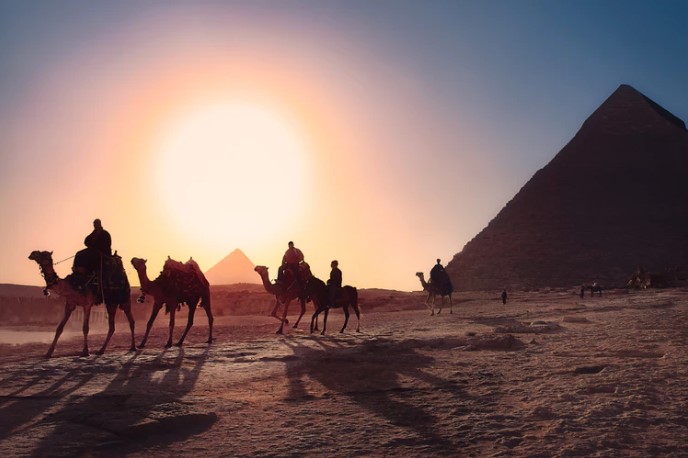 ARCHAEOLOGISTS working at a quarry in Egypt have made an extraordinary discovery on the banks of the River Nile – but their discovery has provided more questions than answers.

A sphinx believed to have been abandoned by an Egyptian pharaoh 3,000 years ago has been unearthed by the researchers. The archaeologists found the 11.5-foot tall artefact from an ancient quarry pit at Gebel el-Silsila near Aswan, Egypt. The ram-headed sphinx’s origins are not known, but experts believe it could date from the era of pharaoh Amenhotep III, King Tut’s grandfather.

The sphinx would have been carved from a 10-ton sandstone block. Maria Nilsson, the Swedish archaeologist leading the Gebel el-Silsila excavation, is investigating if the sphinx was abandoned during after Amenhotep III died and his son took became Pharaoh. She said: “One of the aspects that we are considering is whether or not it was left because of the change in rulership.”

Nilsson’s team also discovered a necropolis for men, women and children. Statues of ancient dignitaries and a tomb full of human remains were revealed during the dig. Tiny iron shavings from chisels and fine sandstone chips left behind by artisans carving 3,370 years ago were surrounding the statues. The team also unearthed hundreds of fragments from the hidden shrine of Amenhotep III, who ruled Egypt from 1386 BC to 1349 BC.

A stone fragment with text inscribed in red ochre was also found in the structure. Workers at the site have dug up tons of rubble to discover the statue to its plinth Assistant project director John Ward Nilsson said: “We’ve got an immense task ahead of us to clean all of this tonnage of quarry spoil to reveal all of this New Kingdom layer.”

The rubble is nearly 12 feet thick over the layer dating back to the statue’s creation. It is thought that when Amenhotep III died and his son became Pharaoh the old ruler’s projects were halted. A National Geographic film crew recorded the discovery of the sphinx , which featured in Episode 5 of the television series “The Lost Treasures of Egypt.” It will be shown on Channel 4’s “Secrets of Egypt’s Valley of the Kings” in March.