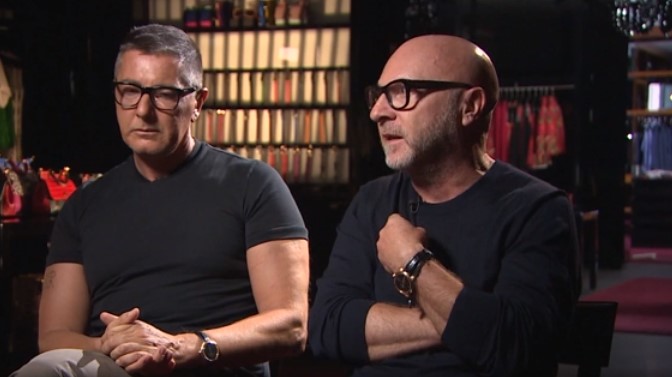 Amid accusations of racism, and boycotts from models and celebrities, the fashion house postponed its Shanghai event Wednesday night — just hours before it was due to start.

The controversy began with a series of promotional videos, released by the luxury brand on social media, that feature an Asian model struggling to eat Italian food with chopsticks. Screen captures appear to show a series of direct messages on Instagram in which Gabbana complains about criticisms of the videos. The Italian designer is then accused of making derogatory remarks directed toward China and Chinese people as he defends the ads.

Both Gabbana and the luxury brand have since posted messages saying that their Instagram accounts had been hacked. On his personal account, Gabbana pasted the words “not me” over images of the alleged comments.

The videos in question first aired on D&G’s Instagram, Facebook and Twitter profiles, as well as its Weibo account in China. The three 40-second spots were created to promote “The Great Show,” which was billed by the fashion house as a “tribute to China.” An earlier WeChat post shared by the company had said that there would be “a shining runway, modern style and glamorous superstars.”

The first “episode,” published Sunday, features a model in a sequined red dress attempting to eat an entire pizza. She prods the pizza with chopsticks to the sound of stereotypical Chinese music, before a narrator offers seemingly patronizing advice such as “don’t attempt to use the chopsticks as knives” and “just use your chopsticks like pliers.”

In the second and third episodes, the same model attempts to eat a cannoli and a bowl of spaghetti. The narrator seems to mispronounce the brand’s name, with some interpreting this as mocking the way Chinese people say “Dolce & Gabbana.”

What was, perhaps, an innocent attempt to play on Chinese culture infuriated some social media users, and the topic began trending on Weibo. But the social media outcry was exacerbated by the alleged Instagram messages.

“We are very sorry for any distress caused by these unauthorized posts,” read a message later posted on Dolce and Gabbana’s official Instagram account. “We have nothing but respect for China and the people of China.”

The fashion house then doubled down in an official statement provided to the press. “Our dream was to bring to Shanghai a tribute event dedicated to China which tells our history and vision,” it read. “It was not simply a fashion show, but something that we created especially with love and passion for China and all the people around the world who loves Dolce & Gabbana.”

But for many, this explanation was not enough. In an Instagram post tagging both the brand and Gabbana directly, Chinese-French model Estelle Chen, who withdrew from the show, doubted the sincerity of the explanation and called the actions “disrespectful and racist.”

“You don’t love China, you love money,” she wrote. “China is rich yes but China is rich in its values, its culture and its people and they won’t spend a penny on a brand that does not respect that.”

Other models and staff from the event responded by posting images of their event badges with “not me” written in red capital letters.

An agent of singer Karry Wang, a Dolce & Gabbana “brand ambassador,” had confirmed that the star would not be attending the show. The modeling agency China Bentley also announced that 24 of its models were pulling out over the controversy.

Amid widespread criticism of Gabbana’s alleged comments, reaction to the videos was more varied. In a post being shared online, an account purporting to be University of California student Coco Qiu, describes the video series as “extremely racist” and created with the “intention to spark public attention, and perhaps rage, for the purpose of advertisement and profits.” The post describes the move as “both pitiful and disrespectful.”

But some segments of Chinese social media reacted in good humor to the controversy. A parody video, which shows a Caucasian man attempting to eat soup with a knife, has been widely circulated on Weibo.

It is not the first time that the brand has courted controversy in Asia. In 2013, over 1,000 protestors descended on one of Dolce & Gabbana’s Hong Kong stores after security guards attempted to stop locals — but not customers from overseas or mainland China — from taking photographs. The brand later apologized over the row.