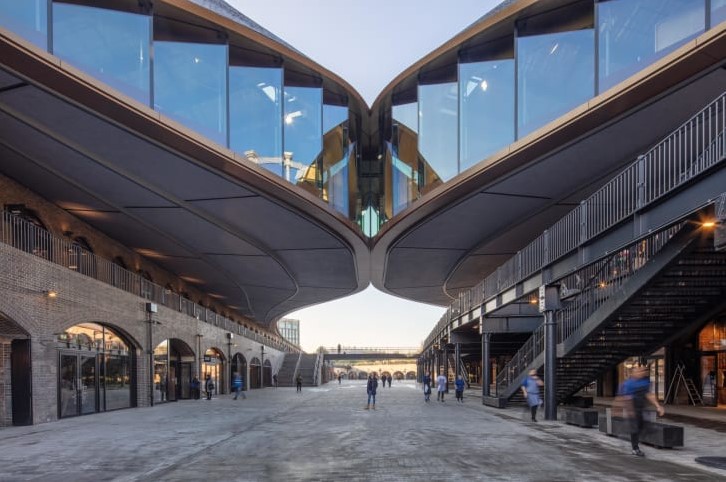 Thomas Heatherwick knew exactly what he wanted to do professionally from the age of six. He was never in any doubt, he says; he simply wasn’t good at anything else. And so a designer is what he became.

The pretext for our interview is a new shopping development, Coal Drops Yard, about half a mile away, by the canal at King’s Cross. I ask Heatherwick whether he shops much himself, but never really get a definitive answer. He demurs. He settled on his own sartorial look a while ago: the hair always tousled, white shirt, baggy pants. And this afternoon, a sleeveless Nehru jacket.

Heatherwick is mainly interested in “the social dynamic of shopping as an excuse for bringing people together,” he says. He is acutely aware that we live in a digital age. Anything that brings us together — as a substitute for old community catalysts like religion and the public library — has even greater importance.

Coal Drops Yard is the latest addition to the expansive and ongoing redevelopment of buildings and pedestrian spaces surrounding the train stations of King’s Cross and St Pancras. Heatherwick Studio has refurbished a pair of Victorian sheds on the edge of the canal site that were once used for the storage and distribution of coal around London by horse and cart. Heatherwick describes them as “a funny pair of buildings with lots of idiosyncrasies.” The two were derelict, standing almost parallel “like skis” or “two broken KitKat fingers,” he says. The developer had wanted a bridge of some kind between them.

The historical palette — charcoal roof and walls, and pavement of reddish-brown brick — has been respected, but the most striking feature is the new roofs. They’re still made of traditional Welsh slate (“From the original seam,” Heatherwick points out) but now they sweep up into the air like a rockabilly quiff, veer across the divide and meet in the middle.

“(The challenge was) to create a heart to the project, something to pull people together,” he says. “Some of team call it ‘the kissing point.'”

Finding a symbolic heart and instilling emotion into projects seems to be a recurring theme in his work. Heatherwick cites the influence of the late American-Canadian activist Jane Jacobs, author of a seminal work, “The Death and Life of Great American Cities.” Jacobs believed passionately in a fresh community based approach to city development, and Heatherwick evidently shares this passion. He’s interested in “what makes streets come alive and makes you feel safe.”

Heatherwick actively dislikes the term “shopping mall.” (“A gross word,” he mutters.) Instead, he likens Coal Drops Yard, his fourth retail development, to “a new high street,” designed around the human experience and how shoppers connect with buildings.

The new third floor, under Coal Drops Yard’s sinuous roof, is to become a Samsung outlet. A Paul Smith shop is on the ground floor and the designer Tom Dixon has set up new headquarters, a shop and a restaurant just yards away. Students from the neighboring art college, Central Saint Martins, will have an opportunity to show their work in some of the smaller spaces.

Success seems to have come very quickly for Heatherwick. As a teenage student at the liberal (and since shut) Rudolf Steiner School Kings Langley, he was exposed to what he calls “alternative thinkers.” This was followed by study in three-dimensional design at Manchester Polytechnic (now Manchester Metropolitan University) and London’s Royal College of Art. At 24, he founded Heatherwick Studio, setting up in a small office in Camden in North London.

“It was just me,” he says simply. “I just kept asking myself, ‘Why isn’t that better? This could be better.'”

Heatherwick admits he expected to be working in obscurity: “I never expected the range of projects, never dreamed of (a studio of) 200 people.” But 24 years later, at 48, that’s how it’s turned out. As of now, Heatherwick Studio has taken on more than 30 projects in Europe, Asia, America, the Middle East and Africa.

The studio is currently working an airport terminal in Singapore and a mixed-use development featuring giant tree-covered concrete columns in Shanghai. The project is simply called 1000 Trees. Heatherwick has a floating park in a similar idiom, Pier 55, under construction in New York.

There is a new headquarters for Google in California, designed with Bjarke Ingels’ BIG firm, that has just been topped out. He excitedly shows me the gleaming model. He likens the roof to a series of “flying handkerchiefs, a solar fabric to power the entire building.”

Heatherwick has had his setbacks and his critics. Most recently, his design for an ambitious Garden Bridge across London’s river Thames was abandoned last year amid widespread criticism, spiraling construction costs and the withdrawal of mayoral support.

I ask him what makes his practice different from others. His aim, he says, is “to fill the gaps, what others aren’t doing. We (designers) are supposed to think differently. You can’t take space for granted.”

Our allotted interview time of an hour overruns by 10 minutes, while Heatherwick is in full flow. At the end, we shake hands and he moves off purposefully — a designer in a hurry — to his next meeting. He doesn’t look back.