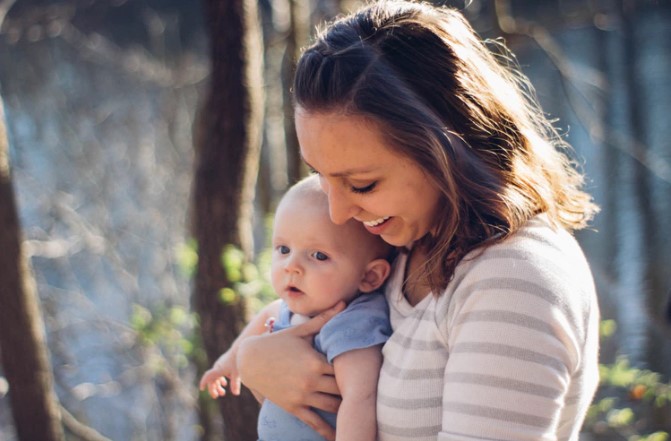 Every new mum bleeds after having her baby (lochia), whether the birth was vaginal or by caesarean section.  Most of the bleeding is from where the placenta comes away from the wall of your womb (uterus), but it can also come from any cuts and tears caused when your baby is being born.  Straight after the birth, the bleeding can be heavy, but it gradually gets less and less over the following days and weeks.  The bleeding starts off as bright red and then over the next few days it changes colour and becomes browner as your womb heals and returns to its pre-pregnancy size.

The bleeding should have stopped altogether by the time your baby is about six weeks old.  The flow will gradually become less, but if you try to do too much too soon, it may start flowing again. If your bleeding gets heavier or it changes colour, after exercise, for example, it’s a sign that you need to slow down.  If you’re breastfeeding it can make the bleeding redder or heavier. You can also get cramps like period pain, called after-pains. This happens because breastfeeding causes your womb to contract. After-pains can be more intense if you’ve had twins or more. You can ease the pain with ibuprofen, which is a non-steroidal anti-inflammatory (NSAID).

Do I need to do anything about the bleeding?

Not really. Just stock up on maternity pads. Two or three packs of 12 should do.  Don’t use tampons until you’ve had your six-week postnatal check. While your vagina and womb are still healing, using tampons (or menstrual cups) could increase your chances of getting an infection.  You may need to change your pad every hour or two to start with, then every three hours or four hours in the coming days and weeks.

Always wash your hands before and after changing your pad, to reduce the chances of infection. You may also have a wound between your vagina and back passage (perineum). You’ll need to keep this part of your body clean to prevent infection there as well. Take a bath or shower at least once a day, and change your maternity pad regularly.  Some mums like to add salt to their bath water, but your wound will heal just as well with clean water alone.