It’s time to set the record straight! Kylie Jenner was photographed arriving at her ex, Tyga’s, recording studio just hours after it was reported that she had ended her relationship with Travis Scott. However, she wants to be clear that there is NOTHING going on with her and Tyga. “The Internet makes everything 100 times more dramatic than what it really is,” Kylie tweeted on Oct. 3. “There was no ‘2am date with Tyga.’ You see my drop two of my friends off at a studio that he happened to be at. Travis and I are on great terms and our main focus right now is [our daughter] Stormi. Our friendship and our daughter is priority.”

Kylie and Travis were hot and heavy at the end of summer, but their romance fizzled out over the last several weeks, and TMZ broke the news that the pair had ended their relationship on Oct. 1. They were together for about two and a half years before the split. Meanwhile, Kylie dated Tyga on and off for more than three years when she was just a teenager. The exes were super private about their romance when it first began, as Kylie was just 16 years old. They broke up in 2017, and just weeks later, Kylie was first spotted with Travis at Coachella. 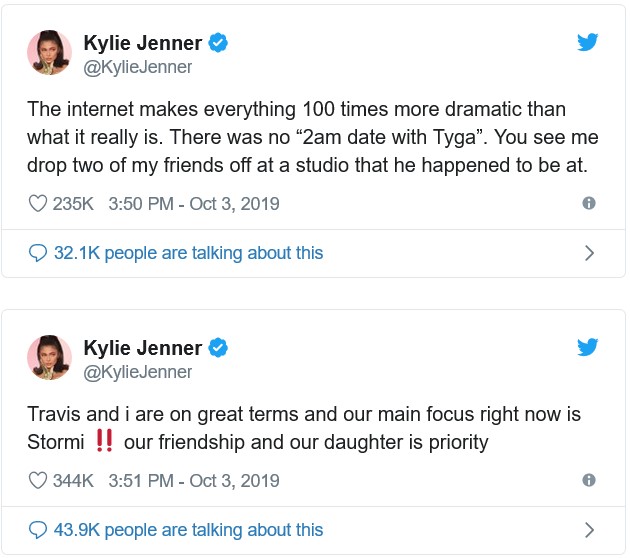 Interestingly, Kylie was spotted hanging out with Tyga back in August. The makeup mogul was in Las Vegas for Sofia Richie’s 21st birthday party on Aug. 24, and their group hit up Sapphire Strip Club, where Tyga also happened to be partying. “They definitely seemed friendly,” an eyewitness told HollywoodLife t the time. As for Travis — he was nowhere in sight, as he didn’t join Kylie in Sin City that weekend.

Kylie and Travis seemed very much in love when she supported him at the premiere of his documentary at the end of August. They even posed for PDA-filled photos on the red carpet! However, just days later, fans began speculating that there was trouble in paradise for the pair. It all started when Kylie took a selfie in her massive, walk-in closet, and fans pointed out that a framed photo with Travis was missing from the table in the background. Then, Kylie attended Justin Bieber and Hailey Baldwin’s wedding solo on Sept. 30, further fueling the breakup reports. Now, it’s officially been confirmed by Kylie herself.