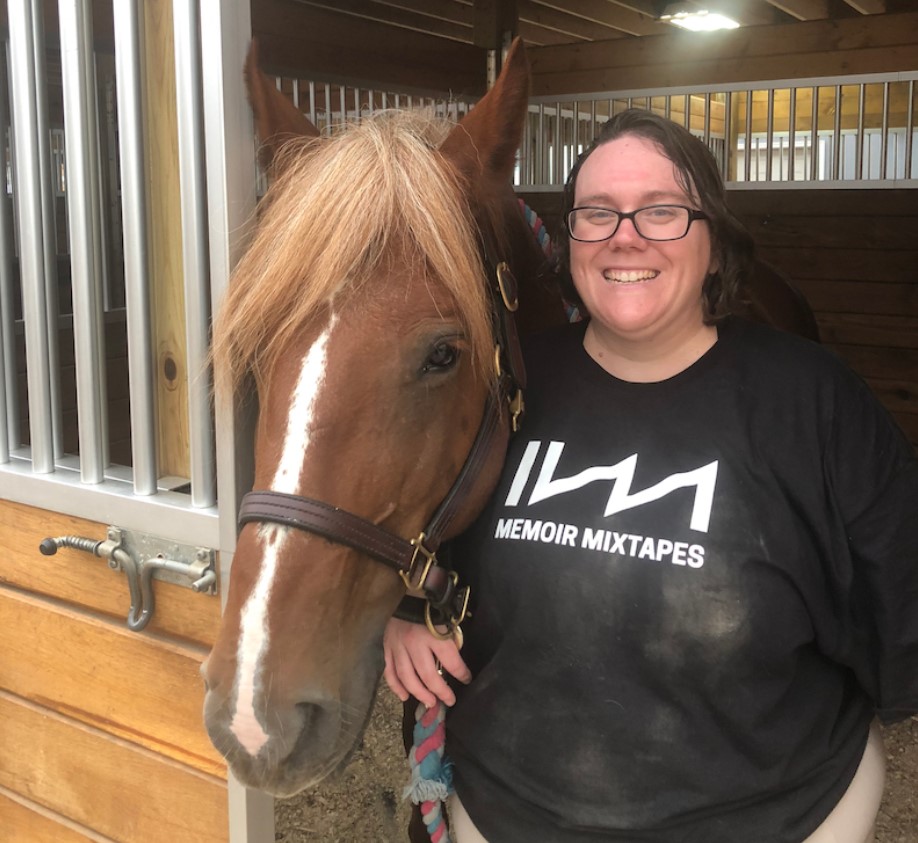 On Not Riding While Pregnant

When I was growing up, the common wisdom I encountered was that riding while pregnant was dangerous and not something one should do. Once, in my early 20s, I remember only slightly uneasily accepting the groupthink in a conversation wherein somebody said, “I wouldn’t ride, not if I cared about the kid.”

But only a couple years later, I reversed my opinion, clinging to the edicts that pregnancy isn’t necessarily incapacitating; that early in the pregnancy, there’s little a fall could do, and women have the right to live our lives. The argument that one of the “real” issues with falling was that you wouldn’t be able to take pain relievers if you got hurt was particularly convincing.

If I’d gotten pregnant in my mid- to late-20s, I imagine I probably would have kept riding. I was in reasonable riding shape. Sure, I was fat and not a paradigm of fitness, but I felt OK in the saddle and wasn’t sore after every lesson,

A decade later, that was no longer true. I’d ridden maybe once a year between the ages of 28 and 34, and I limped for a week after.

My identity and my reality didn’t match. I still thought of myself as an equestrian, but riding was no longer a normal activity for my body.

My midwife, who knew nothing of my riding ability or habits, told me not to ride and not to go to the barn because something might poke me in the belly. (I ended up leaving her practice for that and other reasons.)

But in the end, I rode exactly once while pregnant.

It was a great ride—my trainer said she thought my hips looked like they were already loosening up—and then life got in the way. With scheduling conflicts, I was only managing a couple lessons a month. By the next time I was due to ride, it was too late

I was still in my first trimester when my anxiety, already not great, put me in near-constant distress. I felt the existential threat, both to myself and to my baby, at every twitch of the flank.

I don’t mean that I was a little bit afraid in my head. My anxiety was physical. I could feel it in my muscles. It was like a hangover. I knew I couldn’t ride like that and probably shouldn’t even be in the barn when I was that worked up. I couldn’t live like that, either. So I asked my doctor for a script for an antidepressant I’d had some luck with in the past.

In the meantime, I was toying with the idea of riding once the meds kicked in. I’d still have some time before the fetus got too much bigger than my pubic bone, I reasoned.

But it was the vet who changed my mind. I was talking with her as well as the barn owner and my trainer. The barn owner had ridden while pregnant, my trainer had not, but it was the vet, who just started shaking her head compassionately, who finally made me realize that I didn’t want to ride. And I shouldn’t.

As it turned out, I likely couldn’t have ridden in my second trimester, anyway. By New Year’s Eve, early in my second trimester, I was having severe pelvic girdle pain, also known as symphysis pubis dysfunction (SPD). I’m fairly certain that if I’d tried to mount, I would have blacked out from the sensation that my pubic bone was ripping in half.

When I think about my approach to riding or not riding while pregnant, I think it’s pretty indicative of who I am as a rider and a person in general.

I’m never entirely convinced that I am my body. I guess that’s not terribly surprising since, as a plus-sized woman, I’ve internalized the message that I’m undesirable even as I feel desire or that I’m not an athlete even as I am performing athletics. My body is not me.

But it turned out riding during pregnancy wasn’t a thinker. It wasn’t an ethical problem. It was a biological problem. First, anxiety, then all the barfing, then I was getting used to insulin, then the SPD and then I was just too darned big around.

We haven’t decided yet if we want to try for another baby, so I don’t know if I’ll make the same choice again. It depends a lot on when I start riding now that the baby is here and how fit I become. And also, I imagine, on whether I get SPD again. Seriously; it’s like angry donkeys pulling on exercise bands tied to your pubic bone.