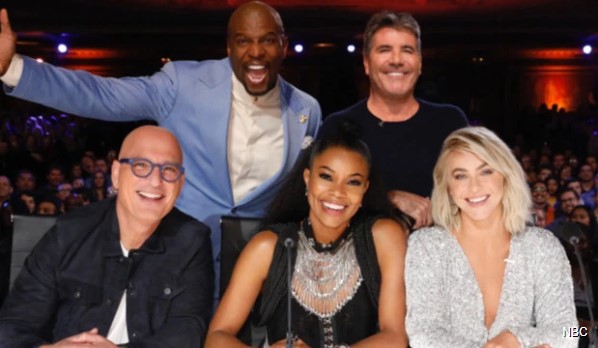 “America’s Got Talent” doesn’t start on NBC until May 28 but filming is already finished on the six audition and four judges cuts episodes of season 14. We’ve been doing some digging and have unearthed plenty of spoilers about this upcoming edition of this summer hit show. Keep reading if you dare for all the latest “AGT” news.

We already knew that there would be two new judges with actress Gabrielle Union and “Dancing with the Star” alum Julianne Hough replacing singer Mel B and model Heidi Klum, who had both been with the show since season 8. We can confirm that Simon Cowell, who joined the show he executive produces in season 11, is back for more merriment as is Howie Mandel, who has been with “AGT” since season 5.

Also new to the is host Terry Crews; he steps in for Tyra Banks who emceed the last two editions of the reality competition series. The “Brooklyn Nine-Nine” star also presided over  “America’s Got Talent: The Champions” earlier this year, which marked the farewell appearance for Mel B and Heidi.

“America’s Got Talent” will follow the same schedule as last year with a premiere date on the Tuesday after Memorial Day. The half dozen episodes showcasing the best (and worst) of the auditions will air every week until July 9. Over the course of these six shows, we will see the judges and Crews hit the golden buzzer once each to send five lucky acts straight through to the live episodes.

The four episodes showcasing the judges cuts begin on July 16. Each episode will feature a guest who gets a Golden Buzzer too. This year’s guest judges are: actress Ellie Kemper, talk show host Jay Leno, country singer Brad Paisley and NBA all-star Dwayne Wade (who is married to Gabrielle) and . The last of these episodes will air on Tuesday, August 6.

The live shows begin on August 13 with three weeks of quarter-finals airing every Tuesday and Wednesday until August 28. At this point in the competition, 36 acts (nine Golden Buzzers, two dozen from the judges cuts rounds, and three wildcards chosen by the producers) will still be in the running. Each week, 12 acts will perform with seven making it through to the semi-finals.

The semi-finals go out live on September 3, 4, 10 and 11. Aside from the 21 acts put through in the quarter-finals there will be one more wildcard. Each week, 11 acts will perform with five making it to the finals. The two-part final will air live on September 17 and 18. On the last night, the top five will be revealed before a countdown to the ultimate winner. Besides bragging rights, the champion act gets $1 million and a chance to headline at Planet Hollywood Resort & Casino in Las Vegas.