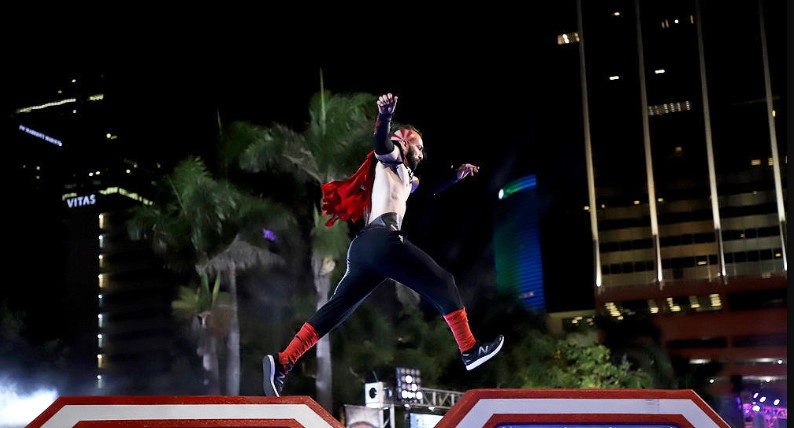 Olympic gold medalist and American sweetheart, Laurie Hernandez, is stepping out of the winners circle and into a hosting gig! The gymnast will be hosting Universal Kids’ new series, American Ninja Warrior Junior, which premieres on Saturday, Feb. 23rd at 7 PM ET, based on the fan-fave show American Ninja Warrior. While we are always in awe watching Laurie dominate the beam or slay her floor routine, she admitted to HollywoodLife.com that even she struggled to complete the ANWJR course that the young warriors are taking on! “In gymnastics, we, of course, have great grips, so it was kind of really embarrassing that I struggled!” Laurie revealed in an EXCLUSIVE interview with HollywoodLife.com. “I did complete it, but not as fast as the kids! They are so fast. It’s really the times that impress me so much. You blink and they’re done!”

Laurie continued to say that she is so excited to see the American Ninja Warrior fan base engage with this new show. “It’s a gigantic family and there are so many people rooting for these kids,” she said. “I’m part of that fan base and I cannot wait help it grow.” Laurie added that so many of the kids are so inspiring and a lot of them are running to raise awareness for different foundations and their own family members, calling some moments “true tearjerkers.”

One of those tearjerkers comes during this EXCLUSIVE preview of the upcoming premiere episode, where we’re introduced to young Ninja, Makena Cook. The athletic and talented 9-year-old revealed to the cameras that because of her athletic ability, she comes face to face with many bullies who “say things that shouldn’t be said.” “Everyone saw I was a different skin color than my mom, and people asked me if I was adopted and that really hurt me, because I’m not adopted and I love my mom,” Makena told the camera through tears, ahead of her run. “I think my mom and I have a lot in common. It’s just not the same skin color. It doesn’t matter what’s on the outside it matters what’s on the inside.” She continued, “I did this because I wanted to show all the little girls that are getting bullied about this stuff, and you can be brave and you can stand up to them.”

Wow! While we didn’t see Makena take on the American Ninja Warrior Junior course just yet, we have a feeling that she is going to totally crush it! You can watch Makena and more of the incredible young talent run the course during the premiere of the show on Universal Kids, Saturday, Feb. 23rd and 7 PM ET.