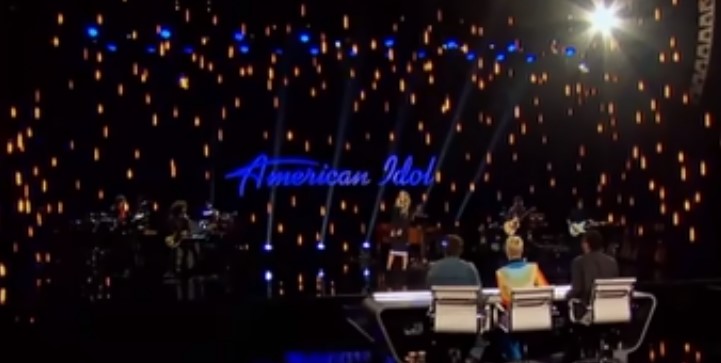 The March 25 episode of American Idol begins with the continuation of last night’s Group Rounds. The March 24 episode ended with Nate Walker getting sick and being rushed to the hospital. He gets the medicine he needs and returns two hours later, but his voice is super hoarse, so the group opts to shorten his solo segment. Out of fairness to the other members of the group, though, the judges ask him to sing his entire part, and although it’s painful, he gets through it. It proves to be enough, too — Nate AND the other three members of his group are moving on to the Solo Round!

The Solo Round begins with about 70 people left, but only 40 will advance. Walker Burroughs is the first to perform, and his rendition of “Your Song” by Elton John brings judges Katy Perry, Luke Bryan and Lionel Richie to their feet. Up next is Juan Pablo, who sings “Million Reasons” by Lady Gaga. Juan Pablo wants to prove he can be a serious performer with this song, but, Katy still isn’t on-board, and admits she doesn’t think Juan’s vocals were great.

The next performer is Ryan Hammond, who sings “All I Ask” by Adele, and gets a standing ovation from the judges. Ryan is followed by Kai The Singer. Kai performs a beautiful rendition of “Lost Without You” by Freya Ridings, and all three judges are captivated, although they’re worried about her nerves.

Next to take the stage is Riley Thompson, who sings Johnny Cash’s “Ring Of Fire,” leaving the judges very impressed by her song choice. The trio of judges also approve of the song choices from Raquel Trinidad (“The First Time I Ever Saw Your Face” by Roberta Flack) and Evelyn Cormier (“Wonderwall” by Oasis). Meanwhile, Eddie Island performs a song he wrote called “1974,” even though the judges warned the contestants that original songs might not be the best option for Solo Rounds. Katy bluntly admits she doesn’t think the song was good. Original songs don’t prove to be a bad choice for everyone, though. Alejandro Aranda also opts to sing his own track, “10 Years,” and his time, the judges are up on their feet to applaud.

Hollywood Week is taking a toll on a lot of the artists, though — they’re tired, and the pressure of performing well is a lot to handle. Margie Mays gets emotional while rehearsing her performance of “Never Enough” from The Greatest Showman, and she’s left worried about whether or not the judges liked it. Up next is Wade Cota, who wants to make a better impression on the judges after forgetting the lyrics during Group Rounds. Unfortunately, they don’t love the original song he performs.

Nate Walker struggles through his performance of “Always On My Mind” by Willie Nelson, as his voice is still hoarse. Tyler Mitchell is also struggling with the exhausting Hollywood Week. He sings “Broken Halos” by Chris Stapleton, and forgets the lyrics midway through. It doesn’t stop him from finishing the performance, but Tyler is obviously very disappointed with how it went.

Drake McCain also sings “Always On My Mind,” and the judges are very happy with the performance. He’s followed by Bumbly, who gives a powerful performance of “God Is A Woman” by Ariana Grande, that leaves the judges with smiles. Next is Nick Townsend, the singer who lost two brothers to suicide before his Idol audition. He sings “In My Blood” by Shawn Mendes, which he admits hit super close to home for him, and it’s beautiful. Gaba is up next, with a performance of “Jealous” by Labrinth, and the judges appear to be happy with it.

Jeremiah Lloyd Harmon performs “The First Time I Ever Saw Your Face” next, and the judges gush amongst themselves about what an “amazing singer” he is. They also give him a standing ovation. Jeremiah is followed by Kate Barnette, who wants to showcase her artistry with a performance of “Daughters” by John Mayer, but the judges are unsure if it’s enough for her to move on. The next two artists are Myra Tran and Shayy, who struggle with their nerves during their rehearsals, and are worried about their fate in the competition.

Laci Kaye Booth is the next performer. She stays up super late to perfect her performance of “Stars” by Grace Potter, and it definitely works, since she has the judges on their feet after she sings. Next, Uche attempts to show a new side to himself with a performance of “Scars To Your Beautiful” by Alessia Cara, which he dedicates to his sisters. It definitely works, as the judges stand up to applaud for him afterward.

Madison Vandenburg is next, and at first, she wants to sing an original song. However, after receiving some advice from advisor Bobby Bones, she decides to change her song choice to Adele’s “All I Ask” with just a few hours to go. It proves to be the right decision, as she gets a standing ovation from all three judges. Austin Michael Robinson also struggles with his song choice of “Speechless” by Dan + Shay, because he has trouble hitting the high note during rehearsals. He changes his song to “Parachute” by Chris Stapleton just minutes before taking the stage, and it might just be a ‘risk worth taking,’ although the judges seem to have mixed feelings.

Next is Alyssa Raghu, who made the top 24 on last season of the show and is back for her second chance. She gives a powerful performance of Pink’s “What About Us?” and definitely catches the judges’ attention. Johanna Jones performs next, and her rendition of “Wicked Games” gets a standing O from the judges. It’s the moment after that brings Katy to tears, though — Johanna’s boyfriend shows up to surprise her, and proposes right on the stage!

Now, it’s time for the judges to make their final selections. The contestants are divided into three different rooms as they await the decision. Uche, Johanna, Laci, Nick, Walker, Margie, Drake, Laine Hardy and Alejandro are all in Room 1. In Room 2, there’s Austin, Gaba, Katie and Juan Pablo, while Room 3 has Tyler, Wade, Alyssa, Bubly and Eddie. Room 1 and 3 are chosen to move on, but sadly, those in Room 2 are told they’re going home.