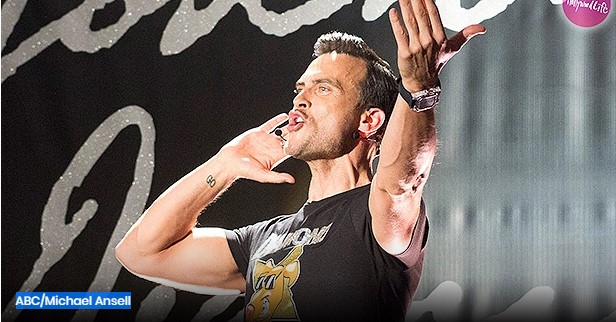 American Housewife – Cheyenne Jackson Shines As The One & Only Johnny Diamond

Say hello to Johnny Diamond! The self-help guru, played by Cheyenne Jackson, will be showing up on the Feb. 12 episode of American Housewife. In our EXCLUSIVE first look photos, Johnny meets Greg and Oliver at a seminar. Everyone has on Johnny’s “Diamond Dogs” t-shirt, which features lots of sparkles and a orange dog right smack dab in the middle. Can we get one of these t-shirts? We can’t wait to see what Cheyenne has in store for American Housewife fans!

American Housewife has had a number of notable guest stars over the course of the past three seasons. Meg’s Zombies co-star Milo Manheim has appeared as Pierce in a number of episodes. Victoria Justice, Nathan Fillion, Leslie Bibb, and more have also guest starred on the hit ABC comedy.

The show has two very special music-themed episodes planned this spring. The American Idol episode, airing March 19, will include special appearances by Idol judges Luke Bryan, Katy Perry, Lionel Richie, as well as host Ryan Seacrest. The episode will follow Taylor as she dreams of becoming a musical superstar and auditions for American Idol! The season finale, airing May 21, will also be a musical episode. American Housewife airs Tuesdays at 8 p.m. on ABC.