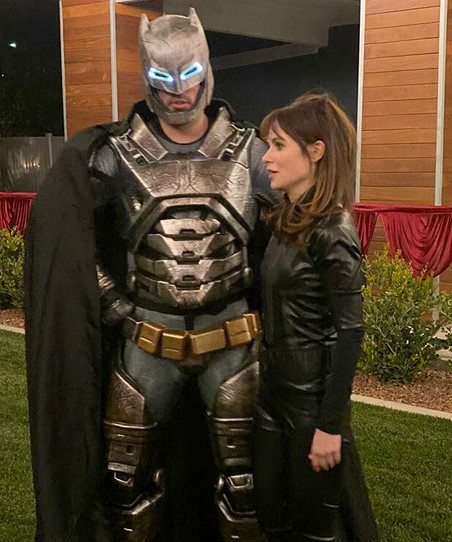 Zooey Deschanel says she was “overjoyed” to attend the wedding of her new boyfriend and Property Brothers star Jonathan Scott’s older brother J.D. Scott, which she did in costume! And it looks like the family has welcomed her with open arms. J.D., also an HGTV star, married his longtime girlfriend Annalee Belle in Las Vegas on Thursday, a day before Halloween. Zooey, 39, and Jonathan, 41, dressed up as Catwoman and Batman for the reception.

“It’s the first time I’ve ever been cat-woman escorted to a fancy dress party wedding by Batman,” the New Girl alum wrote on Instagram on Friday night. “Only for the nuptials of @mrjdscott and @annaleebelle could I be so inspired! Congrats to these gorgeous and gracious love birds, I was overjoyed to celebrate such a happy union!”

“Cat-Woman! My nemesis. Damn you and your charming personality and amazing costume,” J.D. commented. “Curses for sneaking onto the guest list and making my family so happy. You may have won this one but we shall meet again. ❤️”

“We’re so so happy you were able to be there with us!” Annalee commented. “Your costumes were great!”

The wedding was held at a private home and had a ‘40s and ‘50s vintage movie theatre theme. Other guests also arrived in costumes, while the bride and groom wore non-traditional wedding attire.For the ceremony, the groomsmen, which included Jonathan and his twin brother and Property Brothers co-star Drew Scott, dressed up as Mortal Combat fighters.

The actress had recently separated from her second husband of four years, film producer Jacob Pechenik, with whom she shares a daughter, Elsie Otter, 4, and son, Charlie Wolf, 2.