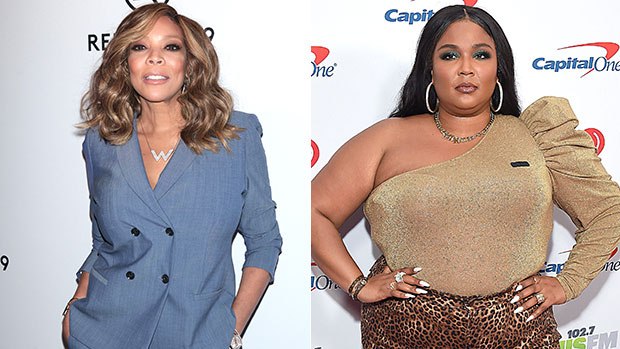 Wendy Williams has joined critics who slammed Lizzo after the singer showed off her bare butt in a thong at a Los Angeles Lakers game on Sunday, December 8. The talk show host, 55, called the cut-out t-shirt dress that showed off her entire backside “just wrong” for the NBA game, which she deemed as a family friendly event. Wendy explained herself during Hot Topics on her daytime talk show on Tuesday, December 10.

“Lizzo has a really good career right now, so I understand her happiness. But, in all actuality, you see the thong, right?”, she began, pointing to the singer’s outfit, which was blown up on the screen behind her. “That’s a dress that had the cutout going on, so she was sitting booty down on the seat, booty down in the car and walking booty exposed into the arena.”

Wendy went on to question how Lizzo, 31, even made it through security with her revealing attire. “I would normally think they’d stop her at security and say, ‘Ma’am we understand, but there are children here. Games are like a family affair and everyone doesn’t want to see all that,’” she said. “Personally speaking, I love Lizzo and I think she’s really talented. But, I don’t care if this is Lady Gaga, Rihanna, Madonna, it’s just wrong! Just wrong! Sorry Lizzo.”

While Wendy admitted to “admiring” Lizzo’s confidence, “I think there’s a time and a place for a cut-out and thong showing,” she said, suggesting that her thong would be better suited for “maybe a Lizzo show, or the strip club, or a nightclub.”

Meanwhile, the “Good As Hell” singer isn’t fazed by the backlash about her backside being exposed at the Lakers vs. Timberwolves game. She took to Instagram live on the night after the game to address the chatter about her look, where she defended herself in since expired videos (see here).

“Who I am and the essence of me and the things that I choose to do as a grown-ass woman can inspire you to do the same. You don’t have to be like me. You need to be like you,” Lizzo went off, explaining, “Never ever let somebody stop you or shame you from being yourself. This is who I’ve always been. Now everyone’s looking at it and your criticism can just remain your criticism. Your criticism has no effect on me. Negative criticism has no stake in my life, no control over my life, over my emotions. I’m the happiest I’ve ever been, surrounded by love. I just wanna spread that love and also spread these cheeks. And if you really don’t like my ass, you can kiss it.”

Lizzo went on to explain that she refuses to change who she is just because of her “shocking” appearance.

“It doesn’t matter what goes on on the internet, nothing really breaks my joy. I’m a really solid grounded person,” she continued. “And I know that I’m shocking because you’ve never seen a body like mine in a long time doing whatever it wants to do, dressing however it dresses, moving the way that it moves. I don’t ever want to sensor myself because I’m suddenly famous,or I don’t want to sensor myself because everyone’s looking at me now. I’m not going to quiet myself or shrink myself because somebody thinks that I’m not sexy to them,” Lizzo concluded as she laughed into the camera.