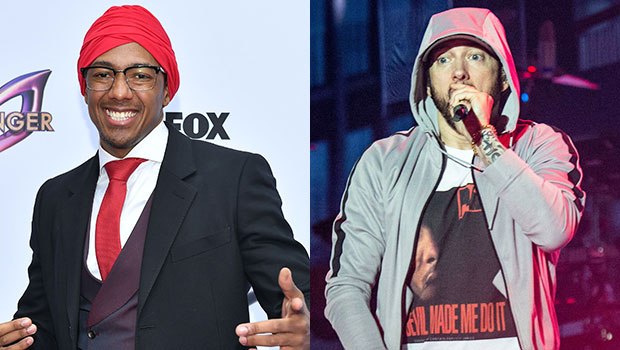 Nick Cannon and Eminem’s feud has officially resurfaced, and Nick was the latest to fire shots with a new Instagram video on the evening of Dec. 9. “Hey Marshallllllllll,” Nick taunted in the video. “Come out and plaaaaaaay.” The footage was taken onstage, so there’s a huge crowd cheering Nick on in the background, as well. The video is Nick’s latest method of trying to invite Eminem to come on his show, Wild ‘N Out, so they can settle the score in person. “@Eminem, I see your handlers let you use the Internet today Marshall!” Nick captioned the video. “@MTVwildnout we waiting….”

The beef between Nick and Eminem has been ongoing for more than ten years, and actually started as a conflict between Em and Nick’s ex-wife, Mariah Carey. Back in the early 2000s, Eminem claimed that he dated Mariah, which she denied. They publicly dissed each other on more than one occasion over the years, and once Nick married Mariah, Eminem started throwing shade at him, too. Although Nick and Mariah are now broken up, they have remained extremely amicable as friends and co-parents, so when Eminem threw new shots at Mariah and Nick on the song “Lord Above,” which came out Dec. 6, the feud was officially reunited.

“I know me and Mariah didn’t end on a high note,” Eminem rapped on the song with Fat Joe. “But that other dude’s whipped, that p***y got him neutered, tied to tell him that chick’s a nutjob ‘fore he got his jewels clipped, almost got my caboose kicked, fool, quit, you not gon’ do s***, I let her chop my ba**s off too, ‘fore I lost to you, Nick.”

Hours after the song came out, Nick responded during his radio show on Power 106. “What’s that pill that old people take? Cialis! We should change his name to Cialis!” Nick said, of Eminem, who’s 47 years old. “Bring your walker, get out ya wheelchair, Eminem. Should I respond back to this? It’s not worthy of a response.”

Well, eventually Nick did respond — with a new song of his own! He teamed up with Suge Knight to drop “The Invitation” on Dec. 9, and the entire thing is an Eminem diss track. In the scathing lyrics, Nick references Eminem’s ex, Kim, as well as his daughter, Hailie. However, the lyric that Eminem seemed to have the biggest problem with was when Nick rapped, “I heard your chauffeur got a video of you suckin’ a c***, you paid him off, then laid him off, now who really the cop?”

This led Eminem to take to Twitter to fire back. “U mad bro?” he wrote. “Stop lying on my d***. I never even had a chauffeur, you bougie f***.” However, he went on to make a joke about the situation, adding, sarcastically, “I demand an apology Nicholas, you’ve made my gardener so jealous!” This tweet is what led to Nick’s taunting Wild ‘N Out video, which you can watch above. It certainly seems like this is FAR from over, though!