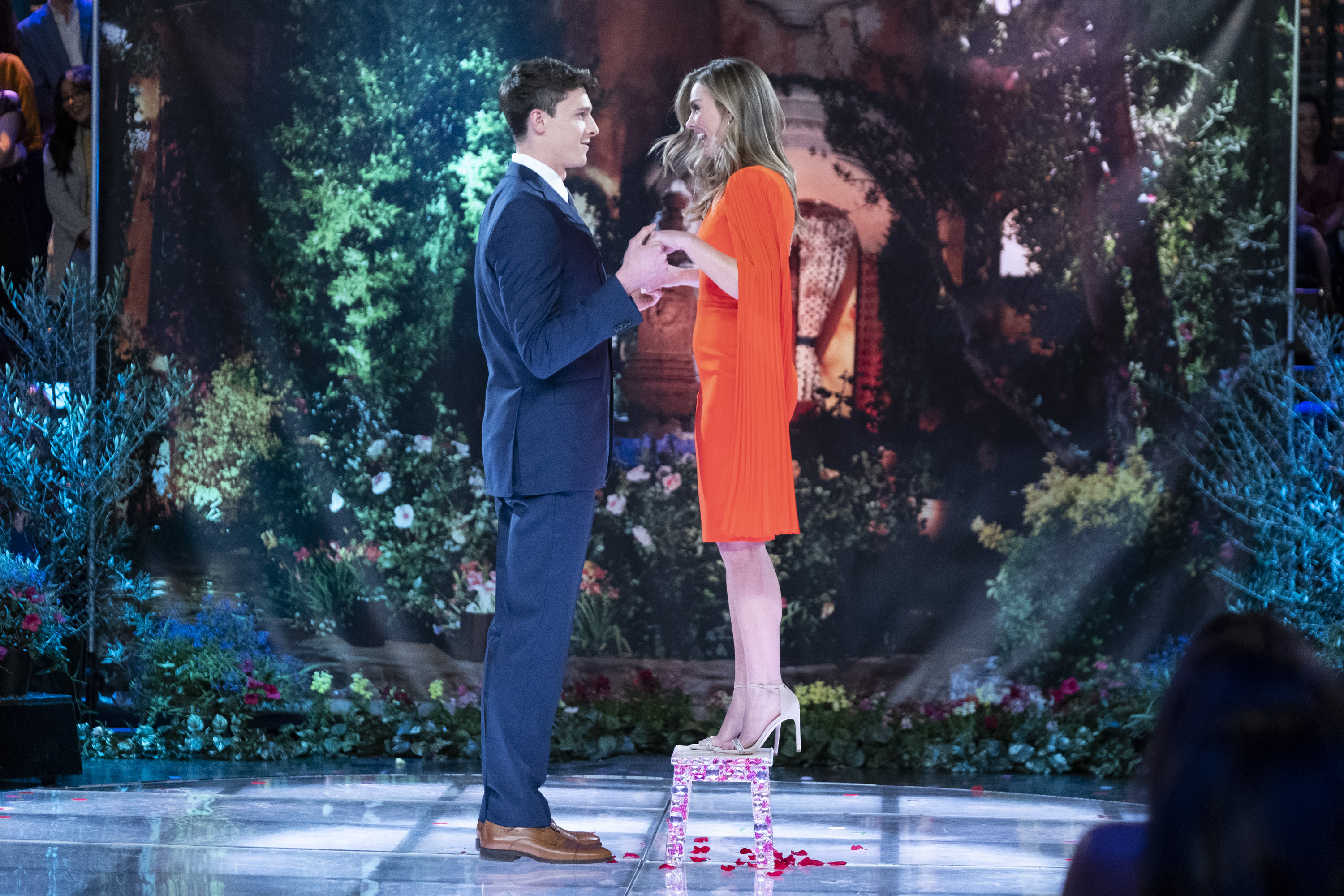 It’s the last week before hometown dates, and Hannah Brown just made some tough decisions. On Monday night’s episode of The Bachelorette, Hannah went on three one-on-one dates and one group date in order to figure out how she felt about the remaining seven men.

“I’m falling for multiple people in totally different ways,” she said at the start of the episode.

Date one consisted of exploring Amsterdam with Jed, for whom Hannah, 24, confessed her love.

“I’m falling in love with you and I’m shaking inside because I think I’ve known it for a little while but I haven’t said it at all,” Hannah told the singer-songwriter, who allegedly had a girlfriend back home while filming the reality show. “And I don’t know, it feels really good, but it feels also really scary because I don’t know what the end of this is for me. I don’t know what the end is. But I know that right now, it feels really good.”

Jed, 25, agreed, and the former pageant queen gave him a rose, which came with an invite to next week’s hometowns. (Of course, he’s become controversial off-screen after an ex alleged they were still in a relationship when he left for the reality show.)

Hanna’s second one-on-one date, Tyler C., also received a rose for opening up about how his parents’ marriage fell apart after they were affected by the recession.

When Mike received the third and final one-on-one date of the week, Connor felt disappointed. “Even though I do have strong feelings for her, I’ve never really brought someone home, and it’s hard to see myself feeling fully comfortable after another group date,” he told Peter. So the investment analyst, 24, went to visit Hannah in her hotel room, where she was journaling.

“When they read the date card tonight and my name wasn’t on it, it’s disappointing,” Connor told Hannah. “I think I’ve said to you for a while our one-on-one time was amazing. Truly. Why I wanted to come up here, I wanted to spend one-on-one time with you and just talk about some stuff.”

Hannah told Connor, “You’ve kind of faded in the group dates.” And because of that, she didn’t see a future for them.

“I don’t know, there’s nothing bad about our time together, it’s always good,” she said. “I feel like there are other relationships that I have stronger feelings with and I guess what I’m looking at the end of this thing and having to make these really hard decisions, and I don’t know if I can see it.”

Connor left, and Hannah proceeded with her date with Mike. They biked around the Netherlands and went to an art studio where they drew each other and then were drawn together by the artist in residence. Though Mike felt he could see himself getting down on one knee in a few weeks, Hannah didn’t share his sentiment. When they convened for the dinner portion of the date, she met Mike in tears.

“You’re looking for your fourth lady,” she said, referring to when Mike said he wanted to add to the three loving women in his family. “And I know that I’m not that fourth lady.”

The portfolio manager, 31, handled the breakup with grace. “I cannot say that I’m happy,” he said. “I don’t know what to say except, thank you for being honest.”

In the car, to the cameras, Mike admitted he felt “crushed.”

“It’s like her putting a dagger in my heart and tearing it out and stepping on it,” he said. “I know that I’m ready for love. I know that I was opening my heart up to Hannah. And I know that she crushed me.”

The Luke P. Drama Is Bologna

The three remaining contestants — Peter, Luke P. and Garrett — went on a group date with Hannah that did not consist of any activity aside from sitting and talking in a large building in the Netherlands.

When Hannah spoke with Luke, he brought up his tense relationship with Garrett, and she questioned why so many of the men still don’t like the import/export manager.

“You don’t feel like you’ve done anything?” Hannah asked.

Luke insisted his concern was on Hannah’s behalf, and concluded that the other guys didn’t like him because of how much time he gets to spend with the Alabama native. “I am exhausted from the drama with Luke,” Hannah said in an on-camera interview. Then she spoke to Garrett, 27, about the drama with Luke.

After they finished their conversation, Garrett sparred with Luke, calling him “a snake,” “psychopath” and “a weasel.” Though Luke said, “Your words are meaningless,” he stood up and got in Garrett’s face.

“I’ve been nothing but truthful with Hannah, and you are not going to mess it up, okay?” Luke said angrily to Garrett, who remained seated. “I don’t care what you said to her, but I am tired of it. You know what this is right here? This is a pile of bologna. Look at that. That’s what you’ve been saying to me and I’m tired of it, I am tired of it okay?”

Luke threw the bologna on the pro golfer’s lap. “Be real with that woman she’s looking for a husband. Be real with her, okay? I’m not going to let you screw this up for me.”

After staying out of the room where the Garrett-Luke face-off took place, Peter got his time with Hannah. “He is just a nice break away from the mess and the drama,” Hannah said of Peter, to whom she gave the group date rose.

Garnett and Luke fought for that final rose over dinner. Garrett played the “I love you” card, proclaiming his love for Hannah before possibly leaving. Luke, however, told Hannah the story of how he encountered God in the shower.

“There was a streak of me when I was chasing sex,” he began. “This is hard for me to talk about. It’s not easy for me to talk about because I hated chasing those selfish, fleshly desires, right? And all this unfulfillment, like nothing satisfied me. And I started hating me. And here’s where the story gets good: I’m getting in the shower, I just remember feeling this heavy weight on me and I just remember balling my eyes out. I remember hearing a voice telling me, ‘Luke, let go.’ I remember looking at the ceiling and I remember I could see a glimpse of like, heaven. I remember thinking to myself, like this is what I need to look forward to. Since then I’ve been completely on fire.” Hannah believed his account and felt it brought the two closer together. “It was really cool to hear him share his testimony,” Hannah said to the cameras. “I like that he is open about his faith and I’m connected to him.”

So connected, in fact, that she gave Luke the last rose — and a ticket to hometowns.

“I have to go with my gut and what my heart is drawing me to,” Hannah said as she gave Luke the rose. He gladly accepted, looking satisfied with himself and laughing as Garrett departed.