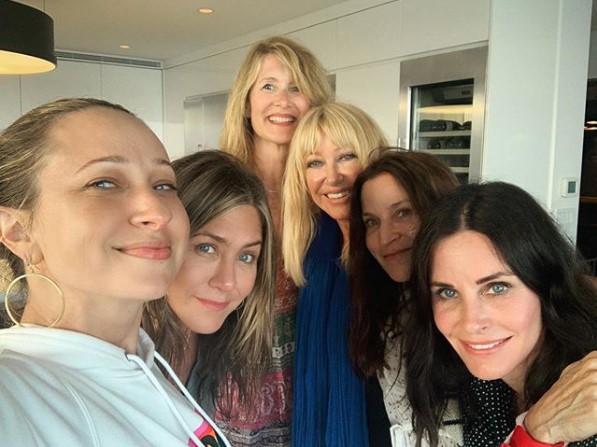 Courteney Cox celebrated the Fourth of July with a handful of her famous friends, including her former Friends costar and real-life BFF, Jennifer Aniston. The actress shared a photo from the star-studded affair to Instagram.

“Happy 4th everyone! I’m lucky to be spending it with so many girls that I love,” Cox, 55, captioned the group shot.

Joining the duo included Big Little Lies star Laura Dern, who knows plenty about being apart of an epic girl squad. Suzanne Somers and jewelry designer Jennifer Meyer also jumped in on the the A-list ladies’ selfie, which Cox shared to her 2.5 million followers. Fellow Friends star, Lisa Kudrow, gushed in the comments over her pals Cox and Aniston, 50, celebrating the holiday together, writing, “awww. happy 4th!”

Chelsea Handler joined in on the love, writing, “This looks like a solid grouping.”

Although relatively new to Instagram, Cox has a habit of sharing her time spent with her celebrity pals to social media, most notably her Friends pals. Just last week, the internet went wild when the actress shared a photo of her, Aniston, and Kudrow, 55, hanging out.

“Trying to figure out what to say on Instagram….#gotnothing #friends#girlsnight,” Cox captioned the photo of the three ladies, who have remained close friends sine their days as Monica, Rachel and Phoebe ended in 2004.

One week before that, the trio geared up for another selfie together, kicking off the celebrations for Cox’s 55th birthday on June 15.

“How lucky am I to celebrate my birthday with these two??? I love you girls. So much ♥️” the actress wrote.

In the 15 years since Friends wrapped, all three women have remained close friends. In April, Cox and Kudrow spent a girls’ night together, and they were also spotted having lunch together in Beverly Hills in January. And her former costars are supportive of Cox’s newfound love for social media. In fact, the Murder Mystery star encouraged Cox to post a video visiting the Friends building in New York City in March.

“I was at Jennifer’s house,” Cox explained during an appearance on Busy Tonight. “She’s like, ‘Post that now and see what happens,’ because she’s not on Instagram yet. I’m thinking to myself, it’s probably better to post this between 9 and 12 because that’s where my fans are. But I didn’t, I posted it late at night and it’s still — it worked.”