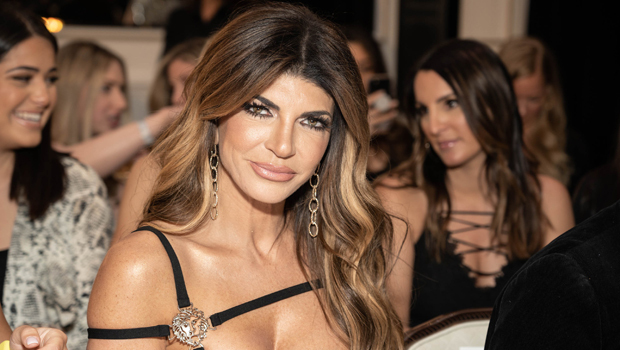 Teresa Giudice, 47, finds the humor in all those rumors that accuse her of cheating on her husband Joe Giudice, 47, with realtor Blake Schreck, 26. “Teresa is laughing that people think she is dating Blake Schreck,” a source close to The Real Housewives of New Jersey star EXCLUSIVELY tells HollywoodLife. But Teresa’s not the only one laughing! “Teresa insists she and Blake Schreck are just really good friends and they constantly joke about what everyone says,” our source continues. “Teresa has a ton of guy friends and enjoys going out and being flirty, but she’d never do anything about it. She’s a married woman.”

But Teresa and Blake’s relationship is not just platonic — it’s professional! “This is a business relationship. They are working together with others on a business project. Anyone who says anything to the contrary is delusional and uninformed,” Teresa’s lawyer, James J. Leonard Jr., told HollywoodLife.

That means Teresa and Blake’s outing in New York City on June 27 wasn’t a date, despite what an eyewitness relayed to Us Weekly. Teresa and Blake were “spotted across from each other on the terrace” at NYC’s Pier 17 rooftop bar, where they were “laughing a lot together,” according to the source. “Blake was making Teresa laugh, and she was giggling. They looked very much like a couple on a date,” the eyewitness added, which certainly could’ve led fans to believe the wrong idea. Blake and Teresa also stirred rumors with their President’s Day weekend getaway to Miami in Feb. 2019.

Although Teresa may enjoy a laugh or two with her younger male friend, she got emotional while confronting the possibility of Joe being deported to Italy. “If Joe gets deported, he’ll never be able to go to their graduation, celebrate their birthdays – anything. He’s gonna be missing out on so much,” the mother of four said in a Bravo Insider clip, released on June 19. Joe already missed the high school graduation of his eldest daughter, Gia, 18, on June 20, as he has remained in custody of ICE since being released from prison on March 14. Teresa and Joe have been married since 1999, and welcomed four daughters together: Gia, Gabriella, 15, Milania, 14, and Audriana, 10.