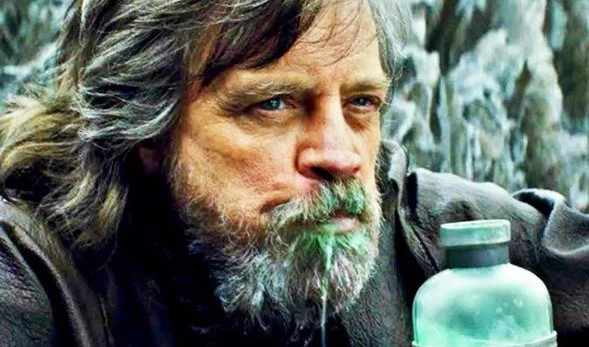 STAR WARS 8 The Last Jedi’s Luke Skywalker actor Mark Hamill has revealed what he thought of the blue and green milk.

There have always been some weirder aspects to the Star Wars movies and the coloured milk has to be one of them. Back in the original Star Wars, a young Mark Hamill had to drink blue milk which made him gag. The actor tweeted this week: “Blue milk was Long Life milk (used by campers because no refrigeration is needed) w/ blue food colouring. Oily, warm & slightly sweet, it literally made me gag, but I was determined to drink it on-camera.”

Hamill added: “It was an acting challenge to appear as though I enjoyed it.”

However, when it came to drinking the green milk of the Space Cow in The Last Jedi, the Luke star had a completely different reaction. Hamill tweeted: “Actually, the green milk (coconut water) was quite tasty!

For the more curious fans, both blue and green milk is on sale at Disneyland’s new Star Wars attraction, Galaxy’s Edge. Meanwhile, Mark Hamill returns as Luke’s Force ghost in Star Wars Episode IX: The Rise of Skywalker this Christmas. Recently, one of its stars Keri Russell explained how the sequel will be very different to Rian Johnson’s The Last Jedi.

She told AP: “When I read his script that he wrote I cried.”

While also reassuring fans that returning Star Wars director JJ Abrams’ vision would be devoted to the original spirit of the franchise.