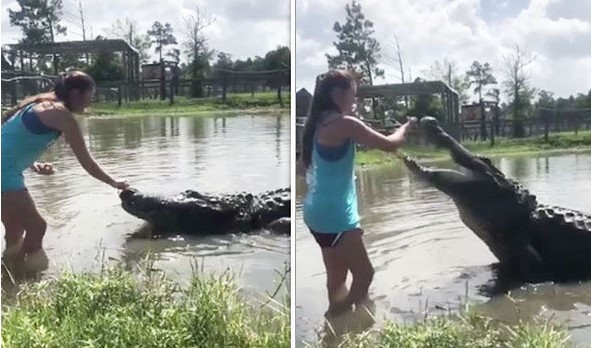 ALLIGATORS are an animal which most people would steer well clear of if they encountered one in the wild. But this young girl is happy to hand-feed a reptile she calls her “best friend.” Alligators will eat absolutely everything and have powerful jaws – so it’s best not to get to close to them. However, an incredible viral video from the USA shows a 21-year-old girl getting very near to just such a creature. The video shows Makenzie Noland, from Nebraska, knee-deep in the same water as an alligator. She is actively encouraging the reptile to come closer and is feeding it with her bare hands. The alligator – which she calls Tex – is 14 foot long and is described by Makenzie as her “best friend.”

She certainly shows no fear as she beckons the huge reptile towards her as a crowd looks on. Using encouraging words she persuades Tex to rear his head high out of the water and open his mouth so she can drop his food in. “Good boy!” she says as she wades backwards through the water. She is dressed in just shorts and a vest – and would be helpless if the alligator chose to attack. Luckily, he seems fairly placid. He is, after all, being fed. Makenzie continues to walk backwards using very obvious beckoning gestures with her hand. She puts her hand on the tip of his snout and says “Up! Up!” so the reptile once again raises himself up into the air – his teeth on full display.

Makenzie drops the food into his mouth and the reptile subsides back into the murky water. She performs the trick two more times as she persuades him to come further out of the lake onto hard ground. The girl posted the video to Twitter where it has been viewed nearly 85,000 times. She captioned the clip, “Me calling Tex from his den to do a show at Gator Country!” Gator Country is the largest Alligator Adventure Park/Sanctuary in Southeast Texas. Twitter users have been impressed by Makenzie’s impressive and very brave display.

“This is crazy! I was nervous just watching,” one person commented on the video.

“This is amazing,” another posted, while another wrote, “Playing with fire. But extremely impressive none the less.”

Male alligators grow to 10 to 15 feet in length on average and can weigh 1,000 pounds. They feed mostly on fish, turtles, snakes, and small mammals, but are opportunists, and, if hungry, will eat pretty much anything. They have eaten humans in rare instances, according to National Geographic.