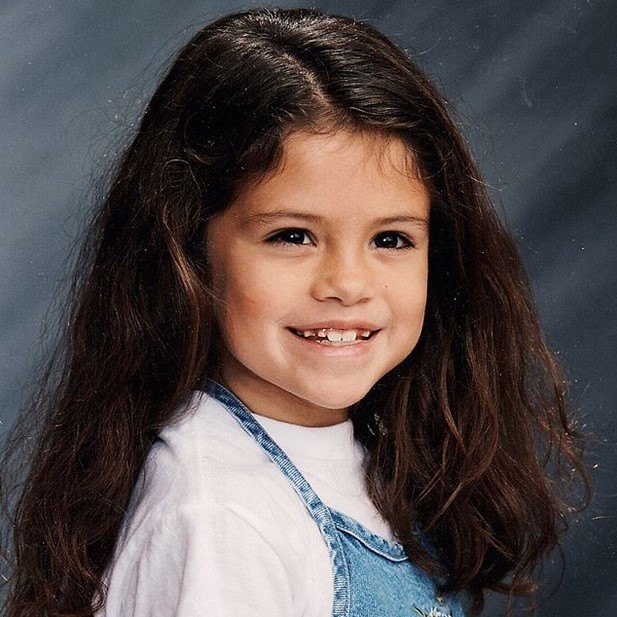 Who is this cutie?? Throwback Thursday came a day early when Selena Gomez took us back to kindergarten in a new Instagram post. The “Wolves” singer, 27, posted the most adorable school photo from elementary school, showing her posing proudly with missing baby teeth. Selena’s rocking a tiny denim jumper and a white t-shirt for her big moment in front of the camera. It’s unclear who old she is in the pic, but she appears to be just a little bit younger than she did (age 7) when she was on Barney and Friends with Demi Lovato. Her fans and friends couldn’t handle the cuteness in the comments. The Vampire Diaries star Nina Dobrev commented, “Omg little QT!!” Celeb stylist (and Scott Disick‘s ex) Chloe Bartoli wrote, “Omg❤️❤️❤️,” as did Sel’s “Taki Taki” collaborator DJ Snake! “OMG MY HEARTTTT,” said Julia Michaels.

Many fans were focusing on Selena’s caption, though, which didn’t really match the pic: “We always go into it blindly.” Is… is that a song lyric?? Selena teased in August that she was working on new music, but she hasn’t released anything yet. Something else curious — her “Bad Liar” co-writer, Justin Tranter, commented with a diamond emoji. Fans immediately caught onto that. “@tranterjustin a hit is oming???!!!!! Omg,” one fan wrote in response. “ARE THESE LYRICS” another fan asked, with one chiming in, “SG2 IS COMING”. Another notable (and hilarious) comment: “Song lyrics? My body is ready” One commenter asked the important question: “sooooo does this mean she’s coming to loverfest”. Lover Fest, for the uninitiated, is the name of Taylor Swift‘s small stadium tour in summer 2020. Considering that Selena and Taylor are friends, and she appeared on Taylor’s Reputation tour, it’s definitely possible!

Selena’s last album was Revival, released in 2015. She embarked on the Revival tour, but ended it early in order to get treatment for lupus and depression. Since then, she has featured on songs like “Taki Taki” and “Anxiety”, but hasn’t debuted any of her own music. That’s changing, though. “Just so you know, I see your comments and I’m working on it,” Selena captioned an Instagram pic over the summer, a black and white shot of a soundboard. She posed in another pic that showed her flashing a peace sign while sitting at a keyboard. The new music may be coming sooner than we think!

Selena’s sweet school photo comes after her ex-boyfriend, Justin Bieber, shared five pics from his childhood on Instagram. In the photos, an ultra-blonde Justin poses with his classmates and on the soccer field — and angered Aaron Carter by doing so, but that’s a story for another day!