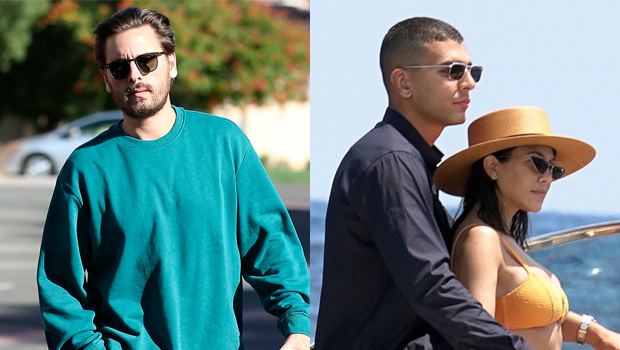 Even though they’re not together, the relationship between Kourtney Kardashian, 40, and her ex Scott Disick, 36, can definitely be described as complicated. The pair are still very much in each other’s lives thanks to their three kids Mason, 9, Penelope, 7, and Reign, 4 — making it that much harder for Scott to see Kourt with Younes Bendjima, 26! “Scott is happier than ever with Sofia Richie, but it’s still really hard for him to see her with another guy,” a source spills EXCLUSIVELY to HollywoodLife. “He tries really hard not to look or pay attention.”

Kourtney and Younes have been in an on-again, off-again relationship since May 2017 after first being linked in Cannes and though the pair seemed to be done for good, they were spotted looking fairly cozy during the Miami Art Basel: the couple specifically hit up celebrity hotspot LIV for a night of clubbing, and Younes was spotted enjoying some time on the beach the following day. Although Scott has been dating 21-year-old Sofia for two years, Kourt’s relationship with Younes dredges up old feelings. “Scott will always have a real deep love for Kourtney and he knows it’ll never work because of things he’s done in the past, but he owns this,” the source continues. “He’s such a different person now, but it’s really been hard for him lately.”

Ultimately, Scott wants the best for his ex — whom he dated for nine years — even if they aren’t going to be together romantically. “He wants her to be happy, but seeing her with other guys reminds him that they’re not together because of his actions,” the insider adds. “He’d do anything for her and they’re in a really great place and Scott would really like to make sure he’s with Kourtney and the kids for the holidays.” Over Scott’s lengthy relationship with the Keeping Up star, his struggles with alcohol and partying were an on-going issue that eventually lead the pair to split for good.

As we previously reported, Kourtney has kept Scott in the dark about her dating life — with the exception of being photographed publicly with Younes — but Scott doesn’t mind him being around because he’s a “stand up guy.” Co-parenting their three kids remains a priority for the two of them, regardless of their personal feelings, and it seems like Scott and Kourtney are doing an amazing job at that!