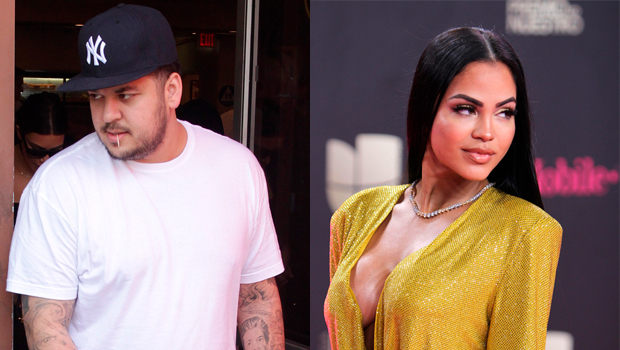 Rob Kardashian Flirts With Singer Natti Natasha On Twitter & Fans Are Not Here For It ‘Robert, No’

The good news is that Rob Kardashian appears to be ready for a romance again after his disastrous relationship with Blac Chyna. The bad news is, he’s going about it in a really awkward way. On June 3, the 32-year-old showed the world he’s got a crush on Dominican singer Natti Natasha, 32. Instead of just sliding into her DM’s as most people would, Rob retweeted a nearly naked Twitter selfie she had shared earlier in the day with her dark hair covering her breasts and wrote “Oh hi” over it. He was roundly told by fans to not go there.

“Rob not in public” a user named Analisa told him while a man named Felipe wrote directly to him “@robkardashian lol please don’t.” Robert, NO!” one person scolded him. One of Natti’s fans told Rob “Leave the queen alone” while a man named Ken tweeted at him “Go away Rob.”

Not everyone was hating on the potential coupling. One fan wrote in the comments “Can you imagine?! a Dominican-Armenian baby?!?! ” with hearts over the eyes emojis and another person agreed, adding “I know! They’d have beautiful babies.” Another pro-Rob fan wrote “If Rob stans Natti, I do too.”  A woman named Nanna told Rob “Get married with her! Natti is amazing and super singer!!!” Another person just got a big laugh out of it, commenting that “this man is the most interesting Kardashian lol ” for his random act of flirting.

Maybe Rob was hoping that by putting it out there for the world to see it would help get Natti’s attention. One person wanted to make absolutely sure that Rob’s mom Kris and his sisters Kim and Khloe were aware of his creeping on Natti by tagging @KrisJenner @khloekardashian @KimKardashian and writing “noooooo.”