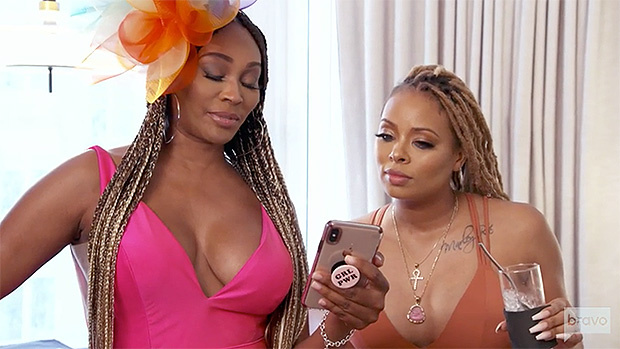 NeNe Leakes‘ return to The Real Housewives of Atlanta on Nov. 17 was not a pleasant one by any means. Many of the ladies had lost contact with her, following last season’s tumultuous reunion, so Cynthia Bailey had no clue what to expect upon reuniting with her frenemy at NYC’s WorldPride. Obviously, they had a major falling out, so awkwardness was to be expected, but Cynthia was caught off guard when — just moments before the event — she learned that NeNe had just blasted her in the press. Eva, who went along with Cynthia to NYC for WorldPride, showed Cynthia a video of NeNe calling her “pathetic”. Apparently, NeNe was upset by all the interviews Cynthia had done, during which she blasted NeNe, so NeNe thought it was fair to call her “pathetic” — even if, according to Cynthia, the only thing that’s pathetic was the OG star’s wig.

Interestingly, as soon as NeNe arrived at WorldPride, she made a beeline for Cynthia, acting as if nothing bad had happened between them. It was alarming, and super strange to watch as a viewer, so we can’t even imagine how Cynthia felt in that moment. But the episode ended as soon as NeNe went in a for a hug, so to see Cynthia’s reaction, you’ll have to tune in next week. As for the other ladies — they had their own drama to deal with this week.

For starters, Kenya revealed that she and Marc are having problems, as she doesn’t feel like she’s very much of a priority to him. He’s barely at home because he’s working so much, and when he is home, he’s doting over their baby girl, so there’s never any time for intimacy. However, Kenya seems like the only one upset by this.

And Porsha checked in with Tanya, during which she revealed how she’ll have a hard time ever moving past Dennis‘ infidelity. After hearing the details about his cheating in therapy, Porsha started connecting the timeline to what was going on in her personal life, and she couldn’t believe how “happy” they were, while he was hooking up with another woman behind her back.

In other news — Kenya checked in with her surrogate, Eva went house hunting, and NeNe revealed Gregg is cancer-free.